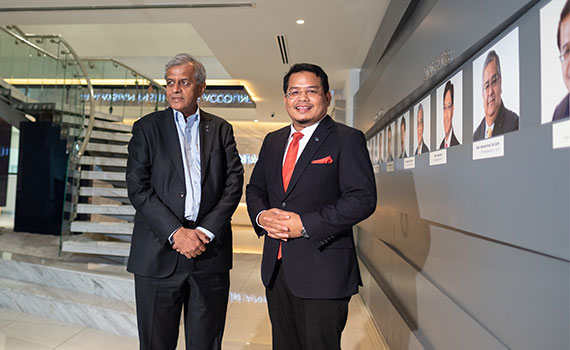 Malaysian Institute of Accountants (MIA) president Salihin Abang is a man on a mission: to be a catalyst for change for the profession.

He sees his election to the post last year – the first time that the MIA’s president and vice president were elected by ordinary council members – as a firm mandate to drive for change within the institute and the profession. At the same time Dato’ Narendra Kumar Jasani, country managing partner of Grant Thornton Malaysia, was named vice president.

The 30-member MIA council comprises those elected by members and those appointed by the government.

Salihin, the founder and managing partner of accountancy firm Salihin, says he is humbled by the trust shown by the council and the organisation.

‘It’s not an easy task but I think there’s a trust that comes with accountability. The members wanted to see change, and both of us want to bring change to the MIA with our vision and mission.’

Jasani agrees that they have been given a clear message by MIA members. ‘They want more to be done by the MIA for the members in the profession as well as those in commerce, industry, academia and the government. We accept that mandate, and we have been doing more for all these members in the last year,’ he says, adding that the hard work of the previous leadership has made the MIA what it is today and the ramp-up in activities to benefit members could only be done with the ardent support of the council, the CEO and management.

One of Salihin’s key tasks is to educate a wider audience on the role of the MIA. He admits that there is a misconception among the public and even among some members of its status as a regulator rather than a professional body.

Salihin says it is his vision to ensure that the MIA stands tall with other regulators such as the Companies Commission of Malaysia, Securities Commission Malaysia (SC) and Bursa Malaysia.

There is a heavy weight of expectation on the new president and his deputy, especially as their term runs for just two years. Salihin concedes that there is still much to be done, one of his priorities being to address the recommendations of the Committee to Strengthen the Accountancy Profession in Malaysia (CSAP).

In August 2015 the committee’s report was presented to the then Minister of Finance. The ministry accepted the 15 recommendations in 2016 and tasked the Securities Commission (SC) with setting up an implementation committee (IC), with the aim of drafting amendments into the Accountants Act 1967. The MIA was among various stakeholders represented on the IC, which has since completed its work.

Following Salihin’s election, one of his first actions was to set up an internal CSAP taskforce, meeting at least once a month. Having previously given its views and proposals on the recommendations to the then Second Finance Minister, the MIA is now seeking to engage with the SC.

Jasani notes that so far 13 recommendations have either been, or are in the process of being, implemented. ‘The two recommendations that are pending are the competency framework for the local accountancy graduates, and the regulatory framework,’ he explains, adding that the MIA leadership also plans to engage with the new Finance Minister to share its views on the recommendations.

The recommendation relating to the regulatory framework has been a particular sticking point, with its suggestion that a new regulatory body be established. ‘In the end, the MIA may still retain its regulatory functions,’ Salihin says. ‘If you want to change the MIA’s role, then you have to change the Accountants Act 1967.’

Salihin states that the MIA is developing a competency framework to ensure the baseline competencies required to be an accountancy professional are set in response to the CSAP recommendations. He acknowledges that he may not have enough time during his term to settle the issues around the recommendations, since these will entail amendments to the Accountants Act 1967. This will be a lengthy process requiring the agreement of various stakeholders including the MIA, regulators, the accountant general, the attorney general, the cabinet and finally parliament.

‘Whoever becomes the next president of the MIA will need to focus on this agenda in completing it expeditiously,’ says Salihin.

Salihin also wants the Accountants Act 1967 amended to give the MIA more clout in acting against bogus accountants. He points out that although the MIA has the power to regulate and develop the profession, it cannot take action against non-members. Currently, the MIA must instead involve the police, the Companies Commission of Malaysia and authorities such as the Inland Revenue Board to take action.

Nevertheless, Jasani says that the MIA is fully committed to dealing with the problem and has made headway in eradicating the scourge over the last three years. ‘The problem of bogus accountants may still remain but it’s much less than before,’ he says.

While Salihin and Jasani also head firms categorised as small and medium practices (SMPs), that does not mean that they prioritise the interests of such businesses. Far from it.

Towards this end, Jasani explains, in 2015 the MIA set up an SMP department, in order to help build capacity and capability. ‘I’m also the chairman of the SMP committee, so that emphasises the importance we place on the small and medium practices,’ he adds.

The MIA leadership has also made it a key priority to help accountants deal with technology disruption and leverage on sweeping changes arising from the digital economy and Industrial Revolution 4.0. This focus on the digital economy was reflected in the recent launch of the MIA Digital Technology Blueprint at its inaugural AccTech Conference in July, part of the regulator’s ongoing digital initiative as it seeks to future-proof the Malaysian accountancy profession and provide more value to the ecosystem.

Moving forward, Salihin wants to see the MIA play a bigger role in ASEAN’s accountancy landscape, especially in supporting accountancy bodies in some of the less developed ASEAN nations.

‘We are looking into how we can bring Malaysia’s expertise to other ASEAN countries,’ Salihin says. ‘It is good that we are helping other countries because we can play a role in terms of the talent, people and capability that we have,’ he says, adding that there has already been encouraging feedback from these initiatives.

Jasani notes that by helping these two nations and other ASEAN countries in the future, ‘we are also helping our members’. This is illustrated by the fact that a number of MIA members have already set up practices in Cambodia.

Malaysia has made great strides in becoming a hub for accountancy education in the region and ACCA has played a major part in this, says Malaysian Institute of Accountants (MIA) president Salihin Abang.

‘This is an area where the MIA can work together with all the professional accountancy bodies, and we see ACCA as our key stakeholder and partner in building this,’ he says. There are currently about 32,000 students in Malaysia studying with ACCA.

Salihin is pleased with the collaboration between the two bodies over the years. ‘ACCA has been a main supporter of the MIA and the profession as a whole, and especially our International Accountants Conference, of which it has been a major sponsor for many years,’ he says.

He foresees more avenues for collaboration between the MIA and ACCA. ‘I think there are a lot of things we can do together, particularly in the areas of corporate social responsibility and education,’ he says. ‘For example, we can work together to reach the underserved by providing scholarships to outstanding students from the rural areas who want to study accountancy.’

One of Salihin’s initiatives has been to engage more with MIA members nationwide – something he was inspired to do by Datuk Alexandra Chin, ACCA’s first Malaysian president (2015-16). ‘She took the initiative to visit remote locations like Kuala Terengganu to meet ACCA members,’ Salihin recalls. ‘Imagine: ACCA’s global president coming to Kuala Terengganu to engage with members.’

Over the past year, Salihin and vice president Dato’ Narendra Kumar Jasani have travelled around the country to meet up with some 1,500 members in seven key locations including Sabah and Sarawak.