Having no experience of a sector can be a good thing, says Melanie Proffitt FCCA, ACCA Council member and CFO at Farncombe Estate; it makes you question everything 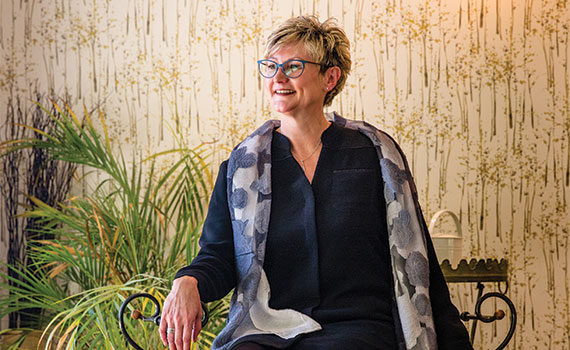 There is a perception that to work in a particular sector you need to have prior knowledge of it, but you don’t, says Melanie Proffitt, ACCA Council member and CFO at Farncombe Estate. ‘Ultimately, a profit and loss statement is the same in every job. The nuances and challenges will be different, but the financial fundamentals are the same.’

She explains that the role of accountants is ‘to tell the story, to explain what the numbers mean. I loved puzzles when I was a child and I still do. I see accounting as similar: it’s gathering all the pieces of information and putting them together to form a picture that people can understand.’

This is more than a theory – Proffitt is living proof of how effective it can be in operation. Her career since qualifying has taken in heavy engineering, high-performance automotive, speciality paper packaging, healthcare and now luxury hotels. ‘You can generally learn what you need to learn from the business, but you always trust that, as a qualified accountant, you are bringing in a level of expertise that will add value to the business,’ she says.

In fact, Proffitt believes that having no experience of an industry can be a positive. ‘When I moved to the healthcare sector, people liked the fact that I challenged everything,’ she recalls. ‘I came with no expectations of how things should be done. If you have no experience of a business, you have a very different lens compared to everyone else.’

She self-deprecatingly tells of her experience at Cosworth, the manufacturer of high-performance engines for racing cars, where she was a newly qualified senior management accountant in the 1990s. ‘I knew absolutely nothing about cars. One of the engineers was talking about Jackie Stewart, the legendary Formula One driver, and I had to ask who he was.’

Proffitt is an enthusiastic advocate of the ACCA Qualification and the doors it opens to interesting and fulfilling careers. ‘ACCA has taken me into roles I had never imagined,’ she says. ‘It’s given me the confidence to go for big jobs. Every opportunity I’ve had has flowed from the point I qualified.’

The decision to train as an accountant sprang from a holiday with her uncle, a South Africa-based businessman. ‘I was young at the time and I think I wanted to be a travel agent, but I met my cousin’s friend who was an accountant, and she talked to me about her job and provided the inspiration to think differently. My uncle said, “You’re good at maths, so why not?”’ After working as a trainee accountant and then assistant to a management accountant at a sizeable manufacturing company in Leicester, Proffitt qualified in 1997 while she was still at Cosworth, before moving to the speciality packaging company Field Group.

‘Sometimes you need an advocate to encourage and support you in getting to the next step of your career and, fortunately, the MD at Field Group was a big supporter of mine,’ she says. She became a divisional FD before the age of 30, was sent on secondment to gain commercial experience, and at the same time the company sponsored her MBA. ‘I would encourage anyone to do it – it was a fantastic learning experience and helps you become a more rounded finance professional.’

After three years with another privately owned packaging company, she switched sectors to join Spire Healthcare as finance and commercial manager at Leicester Hospital, before being appointed general manager of the company’s London Fertility Centre in Harley Street, with a remit to integrate the new acquisition into the group and turn around what was an underperforming business. She rates it as the biggest challenge of her career so far. ‘Fertility is the only area of medicine that’s regulated by an act of parliament. It was scary but fascinating, and I learned a lot about ethics,’ she says.

After 10 years in healthcare, the decision to take up her present role as CFO of Farncombe Estate (she is also acting CEO currently), which runs three luxury hotels in the Cotswolds, did not seem a huge sector leap. ‘There are similarities between hospitals and hotels,’ she points out. ‘I’m dealing in expectations, which were high at the fertility clinic, and they are high here too.’

The 400-acre estate has been privately owned by the same family for over 40 years. It was originally a residential training school and headquarters for a global security company, but work began in 2012 to refurbish buildings on the estate to create three luxury hotels: the 38-bedroom Dormy House Hotel & Spa, which opened in June 2013; the eight-bedroom Foxhill Manor, which can be hired for exclusive use; and the Fish Hotel, a 63-bedroom hotel and restaurant converted from buildings that previously formed a conference centre.

The huge range of buildings on the estate – Dormy House used to be a 17th-century farmhouse, and Foxhill Manor is a Grade II-listed Arts and Crafts country house built in 1909 – have been transformed by a multi-million pound investment and now have a luxurious and relaxed feel, with Scandinavian-inspired interiors and every detail thought through (including a warm outdoor bath for muddy dogs and number-plate recognition at each gate). Each of the hotels is positioned differently, from the affordable but stylish Fish to luxurious Foxhill, where rooms start at £600 a night, and the press have flagged past guests as including Lady Gaga and U2.

In the few years the hotels have been open they have amassed awards and a loyal following. ‘Our occupancy rate is around 90%, which is excellent for the sector – the average is 77%,’ says Proffitt. ‘We have created a strong brand that sells itself, so our reliance on travel agents has been reducing.’

One of the biggest challenges is finding good staff, especially chefs. ‘Labour management is very important: payroll is half of our costs, and the rising cost of employment has put our margins under pressure,’ says Proffitt. ‘Many of our staff live on the estate, and we try to attract the right people with enhanced benefits.’

It is a significant business – the estate employs 275 people – but primarily a family one. The conversion of the estate’s many buildings into a hospitality business is not only creating an attractive enterprise but also preserving and enhancing the value of the estate as a whole. There are several more houses and buildings on the estate, currently used as offices, that could be converted in the future.

Proffitt was hired to manage the ongoing change programme. While each of the hotels is operationally profitable (turnover is around £12m a year), there are sizeable estate overheads to consider and many systems needed updating. ‘Overhauling the technology and systems here is an important project,’ she says. ‘We are putting in a property management system to integrate the whole estate, so there will be a single guest record for your stay, for example, and you can check out at your last point of contact, wherever that may be on the estate.’

Technology, she adds, is transforming the hospitality sector, so the focus at Farncombe is on using it to enhance the brand and customer experience. ‘Customer expectations have certainly changed, but I don’t feel technology can totally replace good customer service and that personal touch you get from directly engaging with your guest, something very much at the heart of Farncombe’s guest-centric culture. But technology does help us understand guests’ preferences better. And preferences change: hoteliers have spent years perfecting the fresh-bed feel – that feeling you get that you’re the first person to sleep in a room. Then Airbnb comes along and suddenly everyone is happy to sleep in a stranger’s bed.’

Proffitt’s appreciation of the career that ACCA has given her, combined with an infectious interest in the people around her (‘I’m definitely a people person’) has also led her to take an active role in ACCA itself, although this was less meticulously planned. ‘I was attending local ACCA events, and someone suggested I join the regional panel, so I did.’ Within a year she was elected president of the panel. ‘I really enjoyed it, and then people started suggesting that I should get involved in Council,’ she says. She was elected to Council in 2014, and also sits on ACCA’s resource oversight and remuneration committees.

‘Fitting it in is a challenge – I’m always busy – but if you are passionate and motivated about what you are doing, you can always do more,’ she says. ‘And I’ve definitely got out of it as much as I’ve put in: you are playing your part in shaping the profession, while also networking with students, members and learning providers. I see myself as a custodian of the qualification. It has made a real difference to my life and I really value it.’

"When I moved to the healthcare sector, people liked the fact that I challenged everything"

‘As Abraham Lincoln said, the best way to predict the future is to create it. Say yes to every opportunity.’

‘No job has a box around it. You can put your own mark on it, so add to it what you want to do.’

‘I’ve always gone out and talked to people. People within the business often know the issues they are facing, but with an outside lens you can help find the solutions.’