Reforms to the US tax code, including breaks for multinationals to repatriate revenues held offshore, could challenge Ireland’s approach to winning foreign direct investment 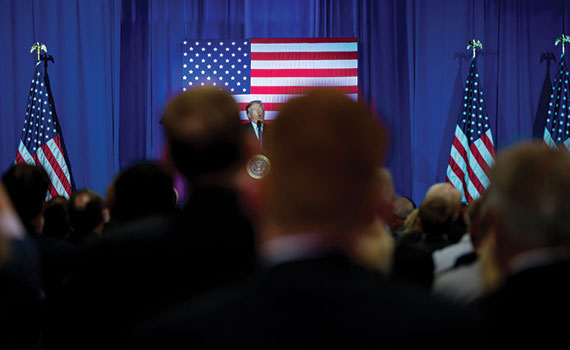 Plans for the biggest overhaul of the US tax system since the 1980s became clearer in September with the publication of a ‘unified framework’. Goals outlined in the nine-page document are to cut tax rates, simplify the tax code and create a more competitive environment for business.

Although the framework is light on detail, the business tax proposals appear mostly positive, according to Grant Thornton tax partner Peter Vale. He says: ‘The 20% corporate tax rate [down from 35%] will certainly make it more attractive to do business in the US. However, when you factor in a likely compromise on the tax rate, plus state taxes, I think the actual rate is likely to land closer to 30%, leaving a large differential between the Irish and US rates. Bear in mind too that US companies set up in Europe for commercial reasons... So Ireland’s low corporate tax rate in Europe will continue to make us a compelling choice for US foreign direct investment.

‘It’s also worth noting that Irish multinationals employ more people in the US than US groups do in Ireland. Under the proposals outlined in the framework, these companies will have more money to reinvest in their businesses.’

It is not yet clear how the tax cuts will be funded. The plan is to stimulate economic activity, but it will take time before the extra tax revenue generated outweighs the reduction brought about by lower rates.

Originally, a border adjustment tax was suggested to fund the cuts, but that met with strong opposition. Savings therefore have to be found elsewhere. President Trump is likely to face some hard political battles ahead before significant tax reform in the US happens.

Asked about inversions, Butler says these entities may be more likely to repatriate, but adds that as they do not have a big presence in Ireland the impact would not be significant.

The unified framework envisages switching from a worldwide to a territorial tax system under which US companies could take advantage of a 100% exemption for dividends from foreign subsidiaries (provided that the US parent company owns at least a 10% stake).

It is unclear whether the US will specify a minimum tax rate that overseas countries must apply.

PwC tax director Susan Roche thinks it unlikely that Irish policymakers will respond to the US legislative changes unless there is a minimum tax rate for US companies under the territorial regime and Ireland’s rate falls below the threshold. ‘Outside that happening, it is difficult to see any direct changes coming to the Irish tax system as a consequence of US tax reform,’ she says.

Transition to the territorial system would involve a one-off repatriation tax. This was mentioned in a one-page paper on tax reform released by the White House in April and, more recently, in a speech in Indiana on 27 September, when Trump said: ‘We will impose a one-time low tax on returning money that is already offshore, so that it can be brought back home to America where it belongs and where it can be put to work and work and work.’

Butler points out that former US president George W Bush introduced a similar measure in 2004. The Homeland Investment Act aimed to stimulate investment in the US economy by providing a one-time tax break for companies to repatriate overseas profits – but it was criticised for going awry. A 2009 academic study from the National Bureau of Economic Research showed that instead of an increase in domestic investment, employment or R&D, every US$1 rise in repatriations was associated with a rise of almost US$1 in payouts to shareholders.

On the timeframe for the changes, Roche suggests that new appointments at the Department of the Treasury mean the prospects of tax reform before the year-end ‘now do not seem as far-fetched as perhaps they did earlier in the year’.

She adds: ‘As tax reform proposals move their way through the notoriously tricky legislative process in the US, one thing is certain: there will be changes.’

Developments in the US add to a growing list of issues keeping tax experts and policymakers busy at present – among them, the Coffey report recommendations and the legislative changes that will be needed as part of the EU anti-tax avoidance directive.

As Butler says: ‘With proposals for tighter tax rules and harmonisation at EU level coming on top of Base Erosion and Profit Shifting-related changes and lower corporate tax rates in the UK, the priority for policymakers has to be to protect Ireland’s interests. Other countries are doing this.’

"When you factor in a likely compromise on the US corporate tax rate, plus state taxes, the actual rate is likely to land closer to 30%"

Reducing the top rate of corporate tax to 20%

Switching to a territorial system of taxation. The framework provides a 100% exemption for dividends from foreign subsidiaries (in which the US parent owns at least a 10% stake)

Development of rules ‘to protect the US tax base by taxing at a reduced rate and on a global basis foreign profits of US multinational corporations’.