Why African economies need to diversify

Whether it’s oil in Nigeria and Angola, coffee in Uganda or copper in Zambia, single-commodity domination of an economy can end up shackling growth 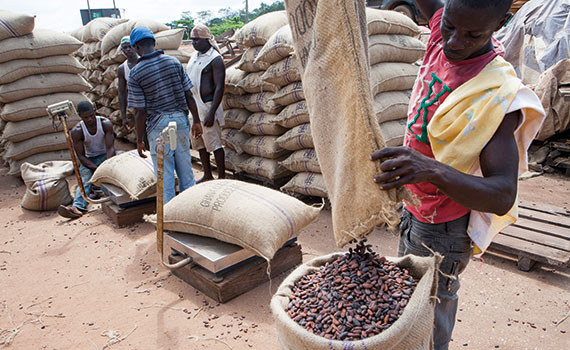 This article was first published in the November/December 2017 Africa edition of Accounting and Business magazine.

Recent years have shown how susceptible African countries are to economic shocks and fluctuations in currencies and commodity prices. Some are more vulnerable than others because their economies are dependent on the export of one or just a few commodities or primary products. When there is a downturn in commodity prices, mono-product economies such as Nigeria, Angola and Zambia accordingly suffer economic stagnation.

In 2015, China’s imports from Africa fell by 40% as a result of the country’s slowing growth, and the drop in demand for iron ore, oil and other minerals triggered a global collapse in commodity prices. In Zambia, where copper accounts for 60% of exports, the currency, the kwacha, hit an all-time low two years ago and remains depressed.

In Nigeria, the collapse in oil prices resulted in budget deficits and depleted foreign reserves, culminating in a recession that the country has only just emerged from. According to the National Bureau of Statistics, the 0.55% rise in Nigeria’s GDP in the second quarter of 2017 brought five consecutive quarters of contraction to an end.

It has brought home to African policymakers that sustainable economic growth depends on diversification. This realisation is backed up by a Deloitte report, African trends going into 2017, which points out that for the most part African governments have not taken advantage of the past decade’s growth spurt to diversify.

Many benefits accrue from diversified economies, not least protection from external shocks. Trade volume grows and there is higher productivity in the economy. While diversification remains elusive, particularly in sub-Saharan countries, progress has been made in some. Tanzania, Uganda and Kenya, for example, have achieved substantial progress with export diversification since the early 1990s. The Indian Ocean state of Mauritius has successfully transformed itself from a sugar-dependent economy into a major financial services hub, with a vibrant export sector in textiles, clothing and jewellery. Botswana is also making concerted efforts to end its reliance on diamond exports. Its diversification effort is focused on textiles, leather, glass and jewellery for export.

Although accountants can help the process of diversification by providing governments with advice, it is politicians who have the ultimate power. In 2009, way before the 2015 collapse of commodity prices, the then president of the Institute of Chartered Accountants of Nigeria, Elizabeth Adegbite, called on the government to diversify the economy or risk missing out on United Nations’ millennium development goals by the 2015 target date, a scenario that eventually played out.

It is easy to recognise the need for change, but more challenging to achieve it. The UN Office of the Special Adviser on Africa, the Organisation for Economic Co-operation and Development and the African Union’s New Partnership for Africa’s Development released a joint study in 2010. Titled Economic Diversification in Africa: a review of selected countries, it identified six drivers with a part to play in facilitating diversification:

Governments need to create a regulatory framework that is attractive to investors and allows entrepreneurs to thrive. Customs procedures must be reformed and the administration burden reduced to make it easier to export. Countries that have adopted these principles have seen results. According to the World Bank, annual average growth rates in Rwanda, Ethiopia and Tanzania are above 6%, despite slowing in sub-Saharan Africa overall to 3% in 2015. Albert Zeufack, the World Bank’s chief economist for Africa, puts their performance down to stronger macroeconomic policy, a better regulatory environment and, crucially, a more diverse structure of exports.

To achieve these goals, human and institutional capacity needs investment to develop skills and a framework to support and facilitate new sectors of activity. There are no short-term fixes. Diversification requires significant capital investment and a consistent and dogged approach from governments.

It won’t happen overnight. Many African countries fall short in ease of doing business rankings (see Kingsley Iweka’s column in the September issue of AB). Procedures for starting up a business must be simplified, access to credit and electricity expanded, and registration of property and payment of taxes made easier.

A key challenge of diversification is the development of income-generating activities in underdeveloped sectors. The most effective way is for governments to work with the private sector to promote innovation and secure investment in research and development. Partnerships with foreign entities and international organisations will be key in this.

A recent example is the partnership between the World Bank and Nigeria: the country gained a US$150m credit to enhance its mining sector as part of its economic diversification efforts. Rachid Benmessaoud, World Bank director for Nigeria, believes this is great news for Nigeria and is ‘in line with the Nigerian government’s priority to diversify the economy to a broader range of non-oil productive sectors’.

Another impediment is the lack of modern infrastructure. Road networks are poor or non-existent across the whole of sub-Saharan Africa. Investment in the power sector is also essential. In Nigeria, for example, constant power cuts severely hamper business activities. According to a World Bank report, Africa’s Infrastructure: A Time for Transformation, sub-Saharan Africa needs US$93bn a year to plug its infrastructure gap.

Finally, value must be added to Africa’s natural resources – diversification of production is a key element of a balanced economy. An example of where this approach could be profitable is in cocoa production. Ivory Coast and Ghana are the world’s largest cocoa producers, yet manufacturing activities around the raw product are almost non-existent. Rather than exporting the raw material to Europe and the US, governments and the private sector should work together to ensure the conversion of cocoa into chocolate becomes a profitable industry for Africa. That way, jobs could be created, profit margins and return on investment improved, and wider prosperity achieved – a more beneficial exploitation of the continent’s natural resources than harvesting for export.

"There are no short-term fixes. Diversification requires significant capital investment and a consistent and dogged approach from governments"