David Fitzgerald FCCA, CEO of the Motor Insurers’ Bureau of Ireland, on plans to force fake car insurance claims off the road and the advantage of being Irish 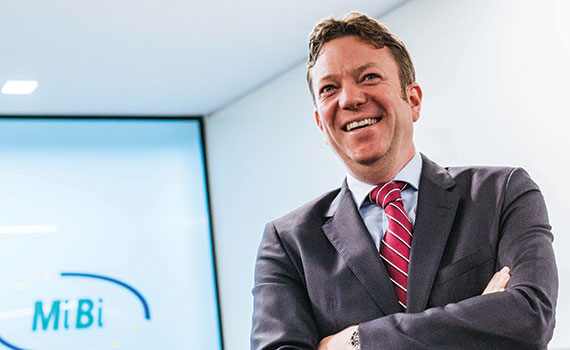 While few would be shocked that fraud is an issue in motor insurance claims, the full extent might surprise even the most jaundiced. In August 2017, the Motor Insurers’ Bureau of Ireland (MIBI) issued its Fighting Fraud report, a hard-hitting document that points to as many as one in every eight insurance claims it handles as being suspicious.

Chief executive David Fitzgerald FCCA makes no bones as to the seriousness of the issue: ‘Claims fraud causes a range of problems for Irish motorists and needs to be seen as the scourge it is. It increases the cost of insurance policies and makes our roads more dangerous. We estimate that cost at approximately €50 for every Irish motor insurance policy. What is even more concerning are the hundreds of injuries sustained every year from such activities, in some cases even leading to fatalities.’

The launch of the Fighting Fraud report represents a step forward in the ‘zero tolerance’ approach by the MIBI, which is funded directly by the motor insurance industry with the goal of compensating victims of road accidents caused by uninsured and unidentified vehicles. Since the beginning of 2017, the organisation has saved over €1.8m by fighting suspected fraudulent cases, with well over 150 more cases under investigation.

Although the MIBI has considerable resources to undertake these investigations itself, Gardai involvement is increasingly important. ‘Where the evidence shows a malicious claim without merit has been made, we ask the Gardai to investigate with a view to initiating criminal proceedings,’ Fitzgerald says.

Scenarios on the rise include deliberately staged accidents, induced accidents and, a sign of our globalised world, claims fraud ‘tourism’. Fitzgerald outlines a recent example of the last of these, in which a group arrived at Dublin Airport, piling into a taxi that was subsequently hit by an uninsured vehicle. ‘We viewed the circumstances as suspicious and made it clear we would contest the case. At this point, the claimants withdrew their action, experiencing apparently miraculous recoveries. We couldn’t help but wonder if they had made their journey home via Knock!’

The rise of cases like this may be linked to the thorny issue of compensation, a long-running pain point for the industry. ‘We’ve traditionally had high levels of compensation in this country and you have to have higher premiums to pay for that. If you look at the UK, a court will typically award £5,000 for a whiplash claim, while a similar case here could expect north of €15,000. A comparatively minor injury can therefore get very expensive and that in turn attracts fraudsters who see this as a relatively low-risk way to make money.’

Such direct criminality aside, the MIBI’s core focus – injuries caused by uninsured or untraced drivers (essentially ‘hit and run’ scenarios) – is hardly less problematic and Fitzgerald says more work needs to be done here to increase awareness about an issue that impacts everyone. ‘Sadly, uninsured driving is a problem that’s growing. It’s a serious crime, but it’s also a very serious issue for society. We estimate that one in 14 cars on the road are uninsured. There’s a challenge to win hearts and minds, and the industry probably hasn’t been fantastic with its PR to date, which is something we are trying to address. We would like driving uninsured to be seen by the public as being as unacceptable as drink driving or speeding.’

The MIBI is currently partnering with the Gardai, the Department of Transport, Tourism and Sport, and the insurance industry on an initiative that combines information sharing and new technology to instantly identify uninsured cars. ‘Data will be updated on a daily basis and that, matched with new technology, will mean Gardai will be able to read licence plates and establish instantly if a vehicle is uninsured. They have considerable powers in these situations and can seize the car on the side of the road.’

Appointed MIBI chief executive following a two-decade career in the insurance industry, Fitzgerald entered at a critical time for the organisation and indeed the industry as a whole as, in May 2017, the Supreme Court delivered its long awaited judgment in the Setanta case.

Setanta was a Maltese-registered car insurance company that in 2014 wound up leaving over 1,700 claims pending in Ireland with a combined value of €90m. A case taken by the Law Society argued that, under its 2009 agreement with the government, the MIBI (and therefore companies underwriting motor insurance), were liable for this amount. Both the High Court and the Court of Appeal agreed.

MIBI’s argument that the 2009 agreement did not cover an insolvent insurer went ultimately to the Supreme Court, which, with a 5:2 majority, sided with them. It was a decision that Fitzgerald says came as a huge relief to the insurance sector and also represented a good day for consumers.

‘I had a strong awareness of the case coming into the role. In fact, it was one of the reasons I took on the position. I felt that taking the case to the Supreme Court was the right thing to do. We were at a pivotal point for the MIBI and industry as a whole, and I thought I could bring a structured approach to that. The decision has removed uncertainty. We are seeing more enquires from insurers outside Ireland now that it is resolved. That competition will play a part in helping to keep prices stable.’

From Portmarnock, County Dublin, Fitzgerald describes himself as a child of the 80s, who initially pursued ACCA recognising that it would provide the opportunity and flexibility to work in all parts of business. Looking back on his career to date, he sees that position vindicated: ‘ACCA opens a lot of doors; it’s a passport that confirms you as a credible business professional. It also provides a coherent, structured way to think about business issues. As new roles pop up, you can dip back into the toolbox with confidence.’

Joining the Dublin firm of Brenson Lawlor, he worked full-time while studying at night. ‘I wanted to put what I was learning into practice. I thought if I could apply the learnings while studying it would be a real benefit.’

Soon after becoming a member of ACCA, he took a role with Allianz, setting himself up for a 20-year career with the company. ‘Like a lot of people, I fell into insurance and ended up loving it. I joined AGF-Irish Life, which became Allianz, as an internal auditor. It was a great way to understand the business and the ethos behind it.’

His career took a significant step forward when he moved to the firm’s global headquarters in Munich, Germany. ‘I was appointed country manager looking after Ireland and Australia, as well as the international health business. It was also an exciting opportunity to work for a global board member.’ He recalls it as ‘a very exciting time in a great place to work, with rewarding and challenging projects in really interesting areas. Being Irish was an asset. We are perceived as hard-working and open. So I used that to my advantage when networking.’

After three and a half years, he returned to Ireland, joining the executive management team and becoming head of claims, before joining the MIBI in 2016.

With the successful conclusion of the Setanta case, the focus for the MIBI is now firmly on its core remit: providing compensation to the victims of uninsured and untraced vehicle accidents, while also pushing to reduce the number of uninsured drivers and challenging fraudulent claims. However, while one headache has receded, another may be looming on the horizon.

‘Brexit is certainly a significant concern. It’s too early to say what the full impact will be, but we’re working closely with the government and our counterparts in the UK. We are the only country with a land border with the UK, so its hugely important that motorists are protected. That will be a key concern and a key focus for us in the years to come.’

"Being Irish was an asset. We are perceived as hardworking and open. So I used that to my advantage when networking"