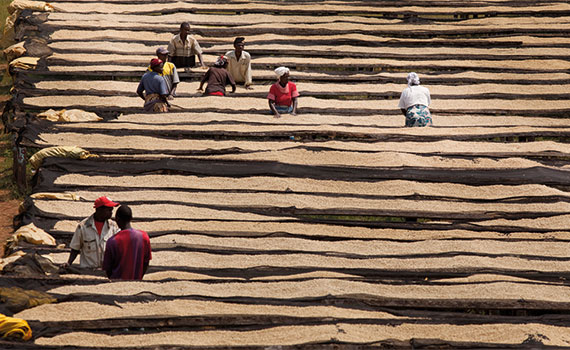 In October 2017 the World Bank forecast that agricultural prices would edge up in 2018 and projected that food demand would rise by at least 20% globally over the next 15 years. The greatest increases are anticipated in East Asia, South Asia and 29 countries in sub-Saharan Africa. These forecasts should raise the spirits of farmers and commodity exchanges across Africa.

Exchanges can play a key part in agricultural markets and improve food security on the continent. At the same time, they can increase the income of farmers through incentivising them to plant always-in-demand staple crops. And the growth in farmers’ businesses should, in turn, help to develop local infrastructure and the regional economy.

Africa has a number of commodity exchanges, offering a varying range of services. The Ethiopia Commodity Exchange (ECX), for example, started in 2008, and focuses on coffee, oilseeds and pulses, while the Agricultural Commodity Exchange (ACE) for Africa was set up for small farmers in 2006 in Malawi. They were recently joined by Rwanda’s East Africa Exchange (EAX), which trades in food staples such as maize, beans and soya. EAX currently has branches in Kenya and Uganda and has plans to open across sub-Saharan Africa.

The exchanges offer a mixture of financial and logistical services such as storage and collateral management (weighing and bagging), commodity management (grading, drying, cleaning, fumigation, etc), electronic receipts (which allow the farmer to sell or use goods as security), a trading platform, risk management products, pricing information and secured trade settlement.

But it hasn’t all been plain sailing for the exchanges. In September 2017, for instance, ECX CEO Ermias Eshetu, who had been in the process of introducing new trading services and working procedures, announced his resignation. According to local reports, he quit after three years in the role following a review of the executive management that had been carried out by ECX directors.

Meanwhile, a February 2017 analysis by The Economist concluded that trading volumes at ACE remain low (a major weakness for any exchange) and its concentration on staple foods ‘leaves it vulnerable to the sort of government interventions that can sink exchanges’. When food is scarce, the buying and selling of staples can become a contentious political issue. ECX also came in for criticism in the same Economist research. Staple foods account for less than 10% of ECX’s trade, which is dominated by two export crops, coffee and sesame seeds. The study suggested that cutting out the middleman has done little for smallholders – coffee farmers’ share of international prices has not budged for over a decade.

However, the exchanges have made valuable contributions too. ECX prompted extensive warehouse construction to store produce, and moved to electronic transactions in 2015, thereby guaranteeing next-day payments and helping farmers’ cashflow.

One provider active in the field is FinComEco, an organisation that aims to improve food security and drive economic diversity by promoting a financial and commodities ecosystem (hence the name). According to director Steve Round, the aim is build up exchanges and infrastructure and help subsistence farmers. ‘It is a bottom-up approach using technology in the locality to increase the income in farmers’ hands,’ he says.

And it is making progress. In summer 2017 FinComEco signed a deal with the government body responsible for Mozambique’s commercial food production and distribution – the Institute of Cereals of Mozambique. The agreement will see FinComEco open up its commodity trading platform and electronic warehouse receipt capability to the country’s farmers; the aim is to create a food reserve that can promote financial inclusion and end the national food deficit.

In November 2017, FinComEco announced another deal, this time with integrated fertiliser company African Potash. The partnership aims to use blockchain for a digital ledger of transactions, agreements, contracts – anything that needs to be independently recorded and verified – to facilitate microloans direct to small-scale farmers. The rate of interest will be significantly cheaper than present agricultural finance costs and more accessible.

Hirander Misra, deputy chairman of FinComEco, says the technology, people and commodities are in place to make a substantial difference across sub-Saharan Africa. Misra, who has more than two decades of experience in the exchange and electronic space, says exchanges can unlock nascent economies and asset classes, such as agricultural products, and so unlock liquidity.

Part of the challenge, Misra says, is to make initiatives sustainable. He argues for the for-profit model, saying that, while donor funding can be leveraged, it is not sustainable in the long run if is the only option. He says: ‘Too many initiatives that are donor-funded are standalone, which means they change livelihoods for hundreds maybe thousands of people – including empowering women – but not fast enough or in a consistent enough fashion.’

Misra says that the FinComEco platform, on the other hand, can provide a sustainable improvement in the living standards of small farmers and their families. It does so by enabling them to achieve better prices for their produce and gives them further revenue opportunities through e-commerce.

To test its idea, FinComEco first started out in a small way in a small country, partnering with ACE in Malawi in 2016. Its trial saw 47,000 smallholder farmers registering to receive the latest market prices on their mobiles, and resulted in an average 31% rise in income from the use of warehouse receipts and better price transparency. The organisation is ambitious: in addition to its deals with Mozambique and Malawi, it hopes to be fully operational in two or three more countries by the end of 2018.

Cultural challenges remain for Africa’s commodity exchanges. While farmers want more routes to market, they have to be persuaded to use warehousing services and need the confidence to take on loans. It will take time for the commodity exchanges not only to gain the necessary trust, but also to build volume and avoid government price meddling.