What does Covid-19 mean to investors? John Kattar looks at implications for the short, medium and longer-term future of financial markets 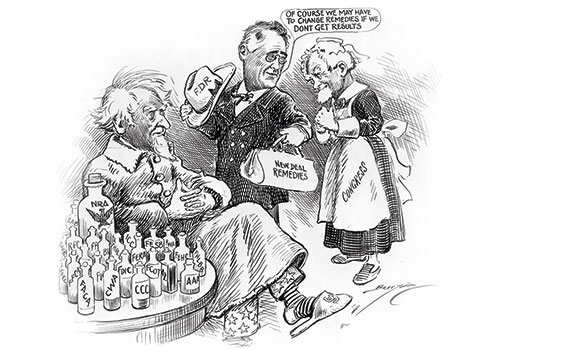 The volatility in global stock markets in recent weeks in reaction to the spread of Covid-19 has been virtually unprecedented. In reality, no investor has a firm grasp of the implications of the crisis. My concerns span three distinct levels.

In order of duration and importance, first are the short-term effects – say, over the next several quarters. The global economy has effectively shut down. As a result, a number of leading investment firms now predict a collapse in economic growth that could surpass anything seen during the Great Depression of the 1930s. Obviously earnings and revenues will be devastated. The big unknown is how well the crash in stock prices reflects this new reality.

As an aside, it’s worth noting that, during the Second World War, the S&P 500 bottomed out in 1941. This was well before the end of the war, but just months before the tide of the war changed, first in the Pacific and later elsewhere. Given financial markets’ uncanny ability to foresee the seemingly unknowable, expect Wall Street to anticipate the end of the crisis before Main Street.

My second area of concern is the intermediate term. What happens beyond the next couple of quarters? Some day this crisis will be over and the economy, markets and life will gradually return to normal. Sadly not all companies will be around to see that day. And so investors are questioning whether corporate cashflow and balance sheets are strong enough to withstand the immediate stress. They’re scrutinising disclosures to understand debt covenants and the nature of ad hoc loans. And they’re dissecting every word uttered by management to get a feel for whether a credible plan will emerge from the global economic carnage.

Many executives are choosing to avoid communicating with investors at this time. For some, this is because they too are struggling to understand the implications of the relentless onslaught of bad news. But for a number of companies there is a clear and pressing need to engage before investors assume the worst. My advice to companies is to keep the lines of communication open. If you don’t, then don’t be surprised if your story is drowned by a rising tide of fake news.

Finally, I’m worried about the legacy of structural changes that this crisis will bring. The expression ‘life will never be the same again’ may be hackneyed, but it’s true in this case.

A good example of an area now under critical review is global supply chains. The Covid-19 crisis has amplified cracks in the system that have been forming since the onset of the recent spate of trade disputes. There’s a growing chorus of concern that the offshore, just-in-time supply regime built over the past several decades has resulted in systematic risk and fragility that are unsustainable. Healthcare in particular has come under intense scrutiny. A large portion of the world’s drugs and equipment are manufactured in China. Supplies of some of these critical goods evaporated seemingly overnight as the Chinese economy ground to a halt early in the pandemic and that country struggled to meet domestic demand. It’s a virtual certainty that the US and Europe will move to shift more of the production to domestic sources.

Another area of likely structural change is harder to predict or quantify, but has the potential to have an even greater long-term impact – the role of government and quasi-governmental institutions (such as central banks) in the economy and in our society.

History teaches us that politicians rarely waste a good crisis, and that ‘temporary’ measures intended to address the immediate crisis have a funny way of becoming permanent. In the midst of the Great Depression, Franklin D Roosevelt introduced the New Deal. This represented an unparalleled level of government intervention in the US economy – and the start of an enduring trend towards big and activist government.

After 9/11, there was a perceived need to increase the monitoring of potential terrorists. Since that time, many countries have expanded the surveillance of their citizens to a level that would have been considered intolerable two decades ago.

More recently, the financial crisis introduced the world to quantitative easing (QE) – a policy tool that had previously been used only by Japan and a few outlier countries. Since that time, QE has become the norm and looks set to grow ‘quantitatively’ during this crisis.

To date, we’ve seen central banks and their political counterparts effectively bankrolling the private sector’s payroll. Company balance sheets are being propped up by zero-interest government loans. The US Federal Reserve is buying corporate debt and has left the door open to acquiring other asset classes hitherto not imagined. The scope and scale of the measures taken are without precedent.

While these policy measures may have been necessary to save lives and to offer some hope of a post-crisis economic rebound, we need to be watchful of the potential for some of these new-found powers to become a standard part of governments’ toolkits for years to come.

As concerned as we all must be about the current situation, in the long run there are grounds for optimism. Once the global population has acquired large-scale immunity, the virus is likely to disappear or become one of a handful of relatively benign bugs that cause the common cold or flu. And, ultimately, it has never been wise to bet against the resiliency and ingenuity of humankind to conquer any crisis. In the calm light of hindsight, the Covid-19 pandemic will prove to be much the same.

John Kattar is a professional investor.