While Todd Shand FCCA may not have picked up a bat as a child, being CFO of Cricket Australia is a dream job that offers a fascinating insight into sport 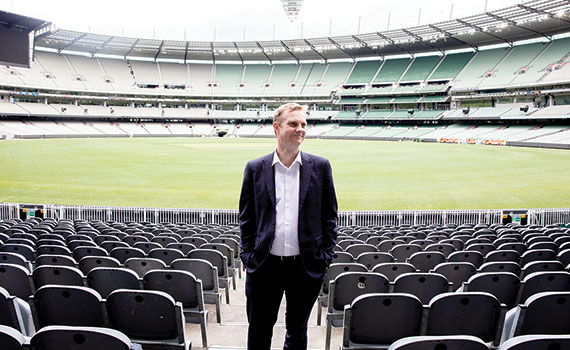 What’s it like to have a job that millions of people dream of? That’s how Todd Shand’s role as CFO of Cricket Australia is viewed – and knowing that, he says, ‘keeps me on my toes’.

Every Australian child has grown up playing backyard cricket, the sport as much an institution there as it is in England. The irony for Shand, now a self-confessed ‘cricket tragic’, was that he’d never picked up a bat – and didn’t know anyone who had. Shand was born in Glasgow, Scotland, where football is the national sport.

After secondary school he drifted into a couple of gap jobs, which ‘happened to be in accounting’, where Shand found his niche. ‘Numbers were always my thing,’ he says.

He then studied accounting at university, but ‘soon worked out’, on the advice of others who had gone before, that a degree alone would not be enough to fulfil his long-term ambition. The ACCA Qualification could do that, he reasoned. ‘Its flexibility suited my lifestyle,’ he says. Knowing that ACCA is internationally recognised, and offers ongoing career development, was the clincher.

During a stint with the BBC in London Shand met his future wife, Wendy and, both being adventurous, they decided to move to Australia. Shand’s accounting qualifications were in demand, so immigration was smooth in 2008 for the by then married couple and first son, Jack.

Settling in Melbourne, where the couple had friends, happenstance kicked in. ‘My first job contracting was here at Cricket Australia,’ Shand says from his office opposite the famous Melbourne Cricket Ground, home of Australian cricket. As a newbie he was introduced to legends of the game – like Greg Chappell and the late Richie Benaud – without having a clue who they were (‘much to the horror of other staff members’, Shand recalls). Even so, the organisation’s purpose resonated.

‘What cricket, and sport in general, does for communities is something dear to my heart, and although I knew nothing about the game, the purpose was what initially pulled me towards it,’ he says.

After the month’s contract was up, he kept in touch with Cricket Australia ‘and made it clear I’d love to return if the right role emerged’. When that call came, in 2010, Shand was head of finance at Ericsson Telecommunications Australia & New Zealand. It was a rewarding job that he enjoyed, but the pull of cricket was too strong. He joined Cricket Australia as financial controller, progressed to head of finance and, in 2016, was appointed CFO, overseeing an annual revenue budget of around AU$500m. ‘It was AU$135m when I started,’ he adds.

Each role was a step up that Shand approached with ‘a different set of eyes’, facing a different set of expectations. ‘The one thing that hasn’t changed is the opportunity to grow with every role,’ he says. It’s a journey he is still on, believing that ‘the need to reinvent yourself is now part of finance’.

‘Cricket works in a way that is far more complex than I ever thought it would be before I started,’ he explains. ‘We are a multi-site business that works closely with other cricket nations, as well as organisations such as the eight states and territory associations in Australia, and the International Cricket Council in Dubai.’

It’s also a business full of financial game-changers. For example, a media broadcast deal worth A$1.182bn over six years was signed in April 2018: a handy fillip for the coffers, but how does the finance chief plan for unknowns like this?

‘The cricket model is fascinating to manage – different to any other business I have worked in,’ Shand concedes. Revenue fluctuates depending on the broadcast and gate revenue linked to the international touring team, whereas operating expenses – excluding payments to cricketers – remain largely the same.

‘This makes annual comparisons challenging, so we work on a four-year cycle,’ he says. Even then, ‘we don’t always know the international cricket match schedule beyond perhaps the next four years’. How do they manage this?

‘We have a very robust financial strategy,’ Shand explains. ‘The model is different, and obviously with such large revenue streams as media rights we need to plan for many scenarios.

‘We manage unknowns through a long-range plan, made up of key assumptions, targets, and the ability for us to dial up and down as we understand the outcome of partnerships we enter into with broadcasters and others. We do, of course, have a level of reserves. This all forms part of a financial strategy that has worked well for the business as we have continued to grow and grow.’

Shand describes his CFO style as that of a ‘consensus-builder’. ‘I think about the “we” rather than the “I”,’ he says. ‘I like to create opportunities for the team to grow, and for the business to move forward working towards the best outcome for cricket – not just finance. Luckily, Cricket Australia and Australian cricket have some great people who are united behind a common purpose and make that easy.’

While cricket can have areas that may be perceived as being relatively rigid, he adds, parts of it can also work in a more entrepreneurial manner, ‘so being adaptable is important’.

‘The beauty of finance is you get to see and work across all areas of the business and, in my case, to serve the wider community,’ Shand continues. ‘For instance, through the Australian Cricket Reconciliation Action Plan, we help to build relationships, respect and trust between Aboriginal and Torres Strait Islands peoples and non-Indigenous Australians,’ he says. ‘I also provide input to the company’s broader digital strategy and initiatives such as system development.’

He describes Cricket Australia as ‘a great organisation that provides opportunities for anyone to get involved’. Staff members have been flag-carriers at major matches and help out behind the scenes; in one highlight last year, a finance team member ‘got to bowl to the India team and his heroes when they toured’.

The culture that Shand so admires in his workplace was tested by the ball-tampering scandal in South Africa in 2018. Three Australian players, including captain Steve Smith, were sanctioned after admitting their role in using sandpaper to rough up the ball, an action that shell-shocked the cricket community and drew worldwide condemnation.

Although not directly implicated, head coach Darren Lehmann resigned and the scandal eventually claimed the scalps of several high-profile Cricket Australia executives, including its chairman and CEO. The finance function wasn’t implicated, but nonetheless felt the fallout.

‘It absolutely affected our team – not in their day-to-day operations but from a feeling perspective,’ Shand says. ‘It struck deeply: people expressed their anger, disappointment and concern – every emotion was thrown around.’

Shand believes that ‘the greatest gift we can give to people is to listen; that’s what I did, and what the organisation is continuing to do. In those conversations, people started to share more – I know I did as well,’ he says. ‘Myself, the team and cricket work hard on the learnings we take from that personally, and how we can apply them to our everyday work going forward.’ Time, he added, is also a healer.

After the events in Cape Town, Cricket Australia chair Earl Eddings promised better. Highlighting the important cultural change taking place across Australian cricket, he said last year: ‘We have quite rightly turned the spotlight onto each and every aspect of Cricket Australia to ensure positive change is reflected both on and off the field.’

Shand adds that ‘while we will never forget the lessons of the past, we want to reassure the Australian cricket community that we’ve listened, and we – from the players to the administration – are genuinely committed to moving forward, earning back the trust of cricket fans across the country and making Australia proud again.’

There are positives to look forward to. Participation at grass-roots level is growing; Australia brought home the 2019 Ashes (men’s and women’s); and in 2020, the nation will host the Men’s and Women’s ICC T20 World Cup, the finals to be played at the Melbourne Cricket Ground.

Internally, Cricket Australia is demonstrating ‘a clear commitment towards prize money parity’ for the Australian women’s team, who are not only the current world champions but ‘are great role models for girls and boys, as well as being respected ambassadors for our country’, he says.

Shand feels he is incredibly privileged to work in a role and a sport that he loves. ACCA’s CPD and networking events keep him on top of his professional game, and at home he plays backyard or beach cricket with younger son, Australian-born Alfie, 11, who hopes to wear the ‘baggy green’ cap one day. Shand also ‘learns a lot, every day’ from his older son Jack (now 16), and credits wife Wendy with keeping him grounded.

Does being finance leader in such a high-profile institution bring any added pressure to his role? ‘What, apart from knowing that millions of people in Australia and across the globe would want my job?’ he jokes.

Seriously, Shand adds, it’s hard to call it pressure when you love your job, love coming to work each day, and are aligned with the purpose so heavily.

In fact, he’s more likely to face a grilling at a barbecue or the pub, when someone asks Shand about why a certain player was picked ahead of another. ‘At which point I politely remind them I am not a selector! he says.

Shand’s advice to young accountants is to ‘be adventurous, and find what you love to do. The value you bring lies in what you can do for others, so seek out those opportunities.’

‘Invest the time to build a network, and have a support group and mentors who will tell you things – even those you may not want to hear.’

Cricket Australia is the national governing body for cricket in Australia, its purpose being to unite and inspire communities through sport. During the year ending 30 June 2019, 705 international and domestic sanctioned matches were played over 255 days of cricket in Australia and abroad. The 2018-19 financial year also resulted in an operating surplus of AU$18.2m, more than double the year prior (AU$8.3m).