Greggs is evolving from a traditional baker to offering ‘food on the go’ and going from strength to strength, as Duncan Smith FCCA, its head of business finance, reveals 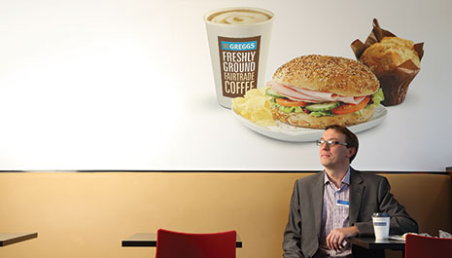 This article was first published in the March 2016 UK edition of Accounting and Business magazine.

The Newcastle-based bakery chain - famed for its sausage rolls and steak bakes - has been serving up a treat for investors. It announced record sales of £800m and profit of £58m in 2014 (41% up on the previous year), with a further 51% profits hike for the first six months of 2015.

Head of business finance Duncan Smith believes that Greggs’ evolution from its roots as a traditional baker has been key to recent success. The company was founded in the 1930s when local man John Gregg started delivering eggs and yeast on his pushbike to local families in Newcastle.

‘We’ve adapted and now see ourselves as a bakery food-on-the-go retailer rather than traditional baker,’ Smith explains. ‘This reflects our customers’ changing lifestyles and needs. Most people now shop at Greggs to eat straight away. They’re not buying half a dozen buns in a bag to eat at home later. That has increasingly become the domain of the supermarkets; conversely we have shifted towards the more dynamic food-on-the-go sector. I think making that shift in focus has been key to our success.’

Sausage rolls are still the company’s number-one product - it sells more than 2 million of them every week. But new growth categories are increasingly boosting sales.

‘At breakfast you can get a bacon or sausage sandwich and coffee for £2, so it’s really good value,’ Smith says. ‘We’ve introduced a host of other products like croissants, fresh fruit, orange juice and porridge, creating a breakfast offer that we didn’t have previously, and that’s been incremental business to us.

‘The other category that’s been really successful is coffee. We’ve seen tremendous growth over the last two to three years in the amount of coffee and tea we sell, and I think that’s in line with the current popularity of coffee shops.’

Smith reports to the finance director and has a role broadly covering financial planning, management information and decision support. Recently his remit was extended to include supporting the CEO on strategy and business planning. His staff of 50 includes a reporting team, and there are also four business partnering teams covering retail operations, investment, supply chain and trading (product, pricing and purchasing decisions).

‘The way I would describe business partnering is getting out from behind your desk and interacting with the business,’ Smith says. ‘It’s about getting the team working with the business on key initiatives and supporting decision-making – almost as part of these functional teams – rather than being a back-office function.’

For example, if there are decisions to be made around investing in new shops or product merchandising and space allocation, then that’s increasingly where finance contributes at Greggs. ‘What we bring to that is analysis,’ says Smith. ‘We’re usually armed with more facts than opinions, and can often bring more of a financial handle to the conversation.’

Smith believes it is this approach that has contributed to recent success in ensuring that the company grows profitably, but he adds that the business partnering journey is an ongoing one. ‘One of the next things we’ll look at is to articulate more clearly the value we’re adding. We’ve talked about creating a value map that lists all the primary areas we work with and quantifies and prioritises where we’re adding most value as a team.’

When Smith joined Greggs in 2002, it was operating as 12 regional businesses, each with its own managing director. Starting as divisional finance director for Yorkshire, he was promoted to group financial controller in 2007 as functions were centralising nationally.

He then took on a wider role as head of finance in 2010. ‘At that stage I had a team of 100 people,’ he says. ‘but in 2015 I relinquished responsibility for financial accounting to focus on managing the business partnering part of finance and to increase our focus on forward planning.’

After gaining a BA in economics at Lancaster University, Smith worked as an auditor with Leeds practice Robson Rhodes and qualified with ACCA. ‘I chose ACCA because I felt it was a great professional business qualification that would not restrict my movement between sectors, and it’s internationally recognised,’ he says.

Two years at the pet food division of Nestlé and five years at Yoplait Dairy Crest (both in the south-east) established his credentials in the food industry. When the Greggs job came up, it was an opportunity to return to his home town of Leeds.

Greggs is constantly evolving. Two current innovations are franchising and building up presence in locations other than in the high street. ‘For example, we might be in the airport or station, or by the side of a road in a retail park,’ Smith explains. ‘It’s about being where our customers need us.’

Greggs has traditionally run and managed its own shops but is now building franchises with partners including Moto, the UK’s largest provider of motorway service areas, and Euro Garages, which operates petrol station forecourts in the north of England. In recent years Greggs has focused its investment on existing stores, including adding seating where possible.

‘That has driven sales in the stores, and that sales growth is very profitable because we’re not having to pay extra rents or hire new people – just driving more sales through existing operations,’ he explains. It’s being integral to decisions like these that Smith enjoys most about his role.

‘It’s an interesting business and an exciting sector where there are a lot of competitors,’ he says. ‘We’re up against others who are constantly innovating, so there’s no resting on our laurels. I enjoy being involved in direction-setting and moving forward. So rather than looking at how we did last week or last month, it’s more about where we’re heading in the future.

‘I really enjoy that element of being involved with the chief executive and operating board in strategy and forward planning because it feels like we’re adding a lot of value in making the right decisions for the future.’

"Most people now shop at Greggs to eat on the go. They’re not buying half a dozen buns in a bag to eat at home later"