Former diplomat Kishore Mahbubani, dean of the school of public policy at the National University of Singapore, explains why he is optimistic about the future of the world 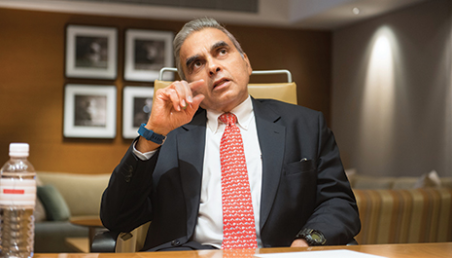 This article was first published in the October 2016 Singapore edition of Accounting and Business magazine.

Professor Kishore Mahbubani, former diplomat, public intellectual and current dean and professor in the practice of public policy at the Lee Kuan Yew School of Public Policy at the National University of Singapore, is an optimist. A former ambassador to the United Nations (UN), Mahbubani believes that if you take a step back from the daily headlines, you will see that things around the world are getting better, not worse.

‘It is a fact that objectively things are getting better and better,’ says the ex-diplomat, who was in Singapore’s foreign service between 1971 and 2004. Fewer people are dying in inter-state conflicts these days, he says. In addition, the UN has exceeded its millennium development goal of halving global poverty, and the middle-class population around the world is exploding.

Mahbubani believes that the future he outlined in his book The Great Convergence points to where key business opportunities will be found. A particular trend that holds potential for businesses, he believes, is the global explosion of the middle class. He cites figures suggesting that the global middle class will grow from 1.8 billion in 2010 to an estimated 3.2 billion in 2020 and 4.9 billion by 2030.

‘This explosion of the middle-class population means that there will be demand for all kinds of products,’ he notes.

He observes that there is a prevailing pessimistic view of the world springing from the fact that large numbers of people in Europe and the US have not seen an improvement in their standard of living in recent decades. Mahbubani recalls that over a breakfast meeting with Joseph Stiglitz, the economist said the standard of living of the bottom 90% in the US had not improved in 40 years. ‘Now that’s a challenge, obviously,’ he admits, adding that this is fuelling the rise of populist politicians.

He dismisses concerns over a shift in politics noting that these politicians will not gain more than a third of the votes and therefore face a natural ceiling that will prevent them from assuming office.

Yet Mahbubani also argues that while standards of living may not have improved significantly, quality of life has. He cites as evidence the availability of smartphones, which provide access to information and consumer products, and widespread access to global travel. ‘In 1990, India had zero cell phones. Now it has over a billion. That’s amazing.

‘Also, cell phone users all over the world are making the switch to smartphones, which means that people’s access to information, to new products, is going to expand dramatically. So business opportunities are obviously going to grow in China, India and South-East Asia.’

While Mahbubani believes in the potential of India, he feels it will never become a China: ‘It is a large country but has got to grow according to its own dynamic,’ he says.

‘It’s not rocket science – the Indians know what needs to be done,’ he says. ‘But of course, the Indian political system is far more complicated. It’s harder to get agreement.’

Yet India will have the fastest growing economy in the world in 2016, he points out. ‘It will grow faster than China. That’s remarkable.’

As a former diplomat, Mahbubani has had the unique experience of representing a very small country on the international stage. Part of his achievement, and that of his colleagues in the foreign service, is that they strove to enable Singapore to punch above its weight, he says. For example, despite its small size, Singapore became a member of the UN Security Council and Mahbubani was himself president of the council twice.

He explains the secret of the success of Singaporean diplomacy as follows: ‘If you’re reasonable, logical and charming, you can have an impact even though you represent a very small country.’

He recounts how a year after Singapore left the Security Council the Russian deputy permanent representative said he still told his staff to read the speeches made by Singapore, because ‘they contain the best analysis of the problem’.

‘So clearly that shows influence. If you provide a very good analysis of the problem, people listen to you,’ says Mahbubani.

And this lesson works outside the world of diplomacy as well, he believes: ‘Reason, logic and charm work very well in business too.’

Mahbubani is only too aware that the world is changing dramatically, and that finance professionals will have to adapt and adjust to this new world. ‘As I document in my book, The New Asian Hemisphere, we are entering a new era of world history marked by the end of Western domination of world history and the natural return of Asia,’ he says.

‘As we enter a new era in which the 88% of the world’s population who live outside the West play more active roles, future finance professionals will have to develop new levels of cultural sensitivity and understanding.’

He believes ACCA is on the right track with the seven key technical, interpersonal and broader qualities – the seven quotients – it has identified that professional accountants need in order to adapt to the changing practice of accounting in the years to come.

‘ACCA is right to emphasise that good technical skills must be accompanied by stronger emotional intelligence and the ability to envision a very different world.’

2004
Dean and professor in the practice of public policy, Lee Kuan Yew School of Public Policy, National University of Singapore