Tomáš Kouřil, CFO at O2 in the Czech Republic 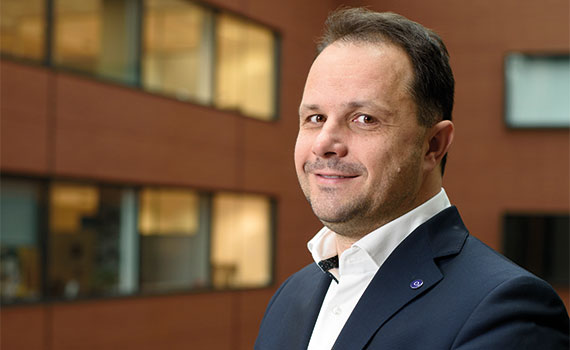 Fintech, smart homes and big data are just some of the ways modern technology is transforming our lives. Telecommunications companies have traditionally spearheaded such developments and, to keep his company at the forefront of change, Tomáš Kouřil FCCA, CFO at O2 Czech Republic, recently extended his responsibilities to include startups and the innovation sector.

‘In telecommunications, the world is changing so quickly, finance professionals need to understand what is happening,’ he warns.

Now in his 14th year with the telecoms giant, Kouřil has spent most of his finance career with global big hitters. But his story began in very different surroundings, far away from the world of Prague-based multinationals in which he currently works.

His office, located in a smart business park, overlooks the D1 motorway, the Czech Republic’s principal highway. At the other end of this road lies the provincial town of Třebíč where, while still at university, he was appointed group marketing director at Kapucín, a small Czech-owned firm supplying the construction industry and telecoms sector. Reporting to the chief executive, he was responsible for all aspects of the group’s marketing activity and learned a valuable lesson. ‘The key thing that I discovered was that without a solid finance background, it’s impossible to manage a business.’

Kouřil believes that his experience at Kapucín provided him with a firm foundation, making it an excellent starting point for his career. ‘It helped me to understand the bigger picture,’ he says. A small firm may by its nature be less corporate than a multinational corporation, but it also involves much more of what he refers to as ‘common sense’, which is so important in day-to-day operations.

Kouřil appreciates the chance he had to work closely with Kapucín’s owner, describing it as a privilege. ‘Working with something smaller helped me when I later moved to a corporation,’ he says, adding that at smaller firms ‘you see the results of your work sooner, even in the early stage of your career’.

Conversely, he explains that at large companies, teamwork and relationships are different. ‘At large firms, where you don’t know people by name or you are working anonymously with others, people start to behave differently.’

Later, Kouřil moved to Deloitte, where he primarily worked in audit. ‘The culture of a privately owned Czech company was quite different to the American style of management at the Big Four. What I liked most at Deloitte was the variety of clients and colleagues I worked with, and I learned a lot there.’

After four years, Kouřil switched to O2 Czech Republic, choosing to continue his career at a multinational company. The cultural difference between small and large companies still interests him – especially now, as the fourth industrial revolution ushers in unprecedented technological change, and even large companies cannot afford to stand still. Kouřil notes that telecommunications firms are facing pressure, especially on their profit margins, from new competitors.

‘We need to innovate in our traditional business,’ he says. O2 encourages internal innovation in order to help it understand and meet evolving customer needs. ‘We need a startup spirit and projects within the company. We are also investing in startups run by external managers,‘ he explains. ‘We believe that by putting our O2 “ecosystem” into startups we can help to scale up joint businesses. More and more of our traditional products are becoming commodities, so we are launching new products and entering what for us are new markets.’

Such markets include financial services, which O2 launched in the Czech Republic and Slovakia in 2015. ‘In just 12 months after we entered the insurtech [insurance technology] market, we had acquired 100,000 insurance policies. And in a further six months, we doubled that to 200,000. This probably isn’t what you would expect from a traditional telecommunications company, but we saw an opportunity and went for it.’

Another new venture came about after the Czech government introduced legislation in 2016 that obliged hotels, restaurants and retailers to provide electronic records of their sales to the tax authorities. O2 saw this change as an opportunity and swiftly introduced a new product in response. ‘Other similar projects will come in the future,’ he notes. ‘This is only the beginning.’

The two worlds, corporate and startup, have a symbiotic relationship, he adds. ‘A startup without access to a customer base? No way! Correspondingly, a corporation without entrepreneurial spirit lacks the agility to change.’ Kouřil argues that O2 has benefited tremendously from the startup platform: ‘It’s difficult to move what used to be a big ship like O2. Startups are much more flexible, which brings us back to the issue of small versus large.’

Startup work is not without its challenges, however. ‘You have to be very disciplined,’ he advises. ‘Things happen very fast, and it’s all very sexy, but you must be strict about how much time you spend on that, because the core business still has to be taken care of.’

Yet O2’s startup projects are reaping results. Take mobile app Taxify. In December, O2 sold its share in the ride-hailing platform for CZK70m, nine times its initial investment made 18 months earlier. Taxify founder Markus Villig praised the flexibility of O2’s startup team, which he said was ‘not at all common in large corporations’.

In 2006, Kouřil helped set up the O2 business in Slovakia, which started with applying for a tender licence. ‘It was not just about winning the tender – the work actually involved a business startup,’ he recalls, adding that the project was a new adventure and that he gained another skillset. ‘We started the entire telco business over a very intensive six-month period. The licence was granted on the very same day as my son was born. I will remember that moment for the rest of my life. My boss called me at the hospital, congratulated me – and then told me I was going to Slovakia straight away.’

Further challenges came in 2013, when Spanish parent company Telefónica agreed to sell a 65.9% share in O2 Czech Republic to Czech-based PPF Group, in a deal worth €2.5bn. The new company subsequently changed its name to O2 Czech Republic, and later decided to split up its fixed and mobile infrastructure operations.

Kouřil notes that this was the first voluntary spinoff in the telecommunications sector – ‘so there weren’t many examples we could be inspired by. We created everything through our best efforts, with no guidelines on how to separate the telco infrastructure,’ he explains, noting that such a process is now becoming more common. ‘We are seeing this becoming a trend, as other companies consider doing something similar, but not to the same extent as we did – rather, they are separating part of the business. We divided the entire infrastructure, which was a unique approach.’

‘From an accounting perspective, separating the infrastructure into the new company involved my accounting and controlling teams making decisions on about 750,000 items on the assets register,’ Kouřil says. ‘And then we had to decide whether the items went on the right or the left of the balance sheet. Often, very technical questions were raised, and we had to split up individual entries.’

Such an achievement did not go unnoticed. In 2015, Kouřil won the Czech Republic’s CFO of the Year award. He was nominated by fellow board members of the CFO Club, an association of financial managers of leading Czech companies. ‘I see it as a team award, and recognition for all the work done on the first voluntary separation of infrastructure in the telco world.’ He is clear that the accolade was not due to his work alone. ‘Without a great team, I would never have been able to receive the award. For me, this is very much a team effort.’

Today, Kouřil is also vice-chairman of the O2 Czech Republic board, as well as continuing to be involved in the startup scene. In looking back over his career, he is optimistic about the future of the finance profession in the Czech Republic. ‘I see young professionals with the right education and approach becoming part of the auditor community, which is definitely a healthy trend.’

But he stresses that finance professionals must continue to learn and develop. One area of development is to adopt a customer-focused mindset to enable them to understand what customers need.

‘My vision of modern finance is that we as an industry need to move from a purely supportive role to more of a business partnering function. We can be part of decision-making. You can influence decisions by presenting the financial perspective, and help the company create value,’ he says.

"The key thing I discovered early on was that without a solid finance background, it’s impossible to manage a business"

‘It is very useful to work directly with a business owner at some point in your career, and to enhance this experience by working at a large company and obtaining a relevant finance qualification.’

'Attention to detail is expected of a finance professional, but when you are promoted, you won’t be able to apply the same level of detail, so you must take a general, selective view and let other team members do their job.’

‘Remember that nothing is free in life. You must suffer if you want to achieve something. For example, for some of your career, you may only have limited time with your family.’

In Slovakia, which O2 entered in 2007, the company has been mobile operator of the year for eight years running and now has nearly two million customers.

As a part of its Smart Home concept, O2 launched the O2 Smart Box, improving customer experience with its home wifi network. It also brings O2TV, broadband and home security onto a single platform.

O2 runs innovation via its startup platform, which focuses on retail and multichannel companies, with startups using the O2 ecosystem to scale the business up. Technologies include online sales booster mluvii.com, and Pygmalios, which provides advance footfall analytics.

"A startup needs access to a customer base, while a corporation without entrepreneurial spirit lacks the necessary speed to change"