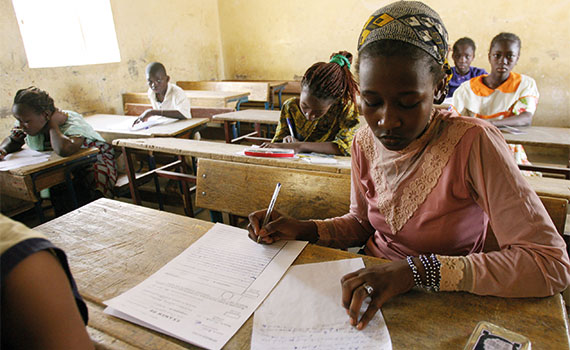 It’s well known that Africa’s long-term economic prospects are being constrained by severe skills shortages in many vital sectors, including accounting and finance. However, one of the areas that requires immediate attention is STEM (science, technology, engineering and mathematics). If Africa does not start building capacity in these subjects, its progress towards achieving sustainable and comprehensive growth will be severely challenged.

In his opening address at the Pan African Conference on Education in April, the assistant director general for education at the United Nations Educational, Scientific and Cultural Organisation (UNESCO), Firmin Matoko, said: ‘We need to help Africa tap into scientific inventions and discoveries that are happening around the world, and step up investments in scientific research to enable Africans to be producers of knowledge rather than consumers by embracing the advancement in technology and equipping the youth with relevant knowledge and skills the 21st century demands.’

Many African countries face significant challenges in educating their youth at all, due to lack of equipment and access to basic amenities like electricity, as well as non-attendance in school. As a result, many children may be unable to read even after several years of education. According to UNESCO’s global education monitoring report 2017/2018, only 22% of primary schools in sub-Saharan Africa have access to electricity.

Restricted access to education and poor learning outcomes have a major impact on the skills of the workforce and hence economic development. The growth seen in some African countries over the past decade is not the result of any concerted effort in addressing education shortfalls; it has been driven by thriving exports of commodities such as iron ore, crude oil and other minerals.

The African Union’s Agenda 2063 – a long-term strategic framework for the transformation of the African continent over the next 50 years – lists seven aspirations to be achieved by 2063. One of these is that Africa’s youth (the continent accounts for 19% of the global population aged 15-24 years, according to the United Nations Economic Commission for Africa) should be guaranteed full access to education, training, skills and technology, and to all necessary resources to realise their full potential.

This aspiration seems achievable given the timeframe, and some governments have taken note. Earlier this year, for example, Muhammadu Buhari, president of Nigeria, said science and technology remained a key instrument for the realisation of the country’s national Economic Recovery and Growth Plan, which aims to transform the economy from a resource-based to a knowledge-driven one. However, translating goals into reality demands focus and effort. African governments are good at articulating great visions, but have a less impressive record on implementation of these grand plans.

If these young people receive an education, particularly in STEM subjects, opportunity knocks. Karen Iten, marketing and communications project manager at the South African Institute of Chartered Accountants, says demand for professional accountants in South Africa is high and falls far short of the needs of commerce, industry and the public sector. ‘The Department of Labour and its ministerial taskforces have classified the profession as a high-demand occupation and one of the 10 professions in the country that is in short supply,’ she explains. Initiatives from high school level upwards help to  raise awareness of the importance of pure maths and promote the accounting profession.

Bridging the skills gap and building the right talent for Africa’s future cannot be left to government alone, however. The private sector needs to adopt a more collaborative and concerted approach to help drive initiatives that will build capacity at the scale and speed required. According to The Business of Education in Africa report, produced by the investment and advisory firm Caerus Capital, the private sector can help address Africa’s educational challenges, if investors and policymakers together seize the opportunities.

In South Africa, the government has recognised that skills development is a key ingredient in the quest for economic growth and prosperity. It has therefore mandated organisations to spend 1.5% of their payroll on training their workforce.

Financial services group MMI Holdings, for example, is investing in nurturing students and partnering with professional bodies to raise the quality of education. Former CEO Nicolaas Kruger says 60% of the allocation of funds via its foundation is channelled into education initiatives.

Finally, governments need to introduce measures to reduce the brain drain – emigration of highly qualified people in search of opportunity – by creating a conducive environment for young professionals to thrive in their country of birth. A draft African Union report, The Revised Migration Policy Framework for Africa and Plan of Action (2018–2027), urges African countries to halt the exodus of skilled nationals to developed countries by providing employment and home-based professional development opportunities.

Many girls in sub-Saharan Africa do not participate significantly or perform well in STEM subjects. This situation becomes more pronounced as the level of education increases and a combination of factors, including cultural practices and attitudes, and biased teaching and learning materials, perpetuate the imbalance.

The Forum for African Women Educationalists (FAWE) – a pan-African non-government organisation founded in 1992 – has developed a STEM model to increase and sustain access, interest, participation and performance of girls in these subjects at all levels.

Founded by five women ministers of education to promote girls’ and women’s education in sub-Saharan Africa, the FAWE model trains teachers to adopt and use STEM curricula, teaching and learning materials and classroom practices that are gender-responsive. As well as teachers, it involves education planners, curriculum developers, publishers and women leaders, and educates parents and stakeholders on the importance of girls’ participation in STEM.

The Science, Mathematics and Technology model was initiated in 2005 and has been introduced in Burkina Faso, Cameroon, Kenya, Malawi, Mali, Mozambique, Rwanda, Swaziland, Tanzania, Uganda, Zambia, Zanzibar and Zimbabwe.

Over 15,000 students have benefited from FAWE’s STEM programme since 2005.

Lending a hand in Tanzania

Every year, thousands of children who complete primary and secondary school education in Tanzania are unable to progress further due to limited access to vocational training and tertiary education. Meanwhile a lack of skilled labour has been identified as one of the major constraints to the east African country’s economic growth and development – a problem common to many countries on the continent.

In 2014 the African Development Bank (AfDB) approved a loan of US$52m for Tanzania to finance technical vocational education and training and teacher education (TVET-TE). The primary purpose of the five-year initiative is to help bridge the skills gap and increase access to education. The TVET-TE project has benefited thousands of children, especially from rural areas, and is supporting Tanzania’s National Development Vision 2025, which seeks to propel Tanzania towards the ambitious goal of becoming a middle-income country by 2025.