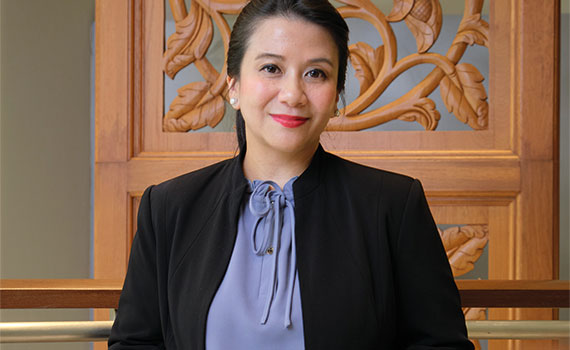 This article was first published in the November/December 2019 Malaysia edition of Accounting and Business magazine.

The role of a tax professional was not uppermost on Farah Rosley’s mind when she was a student or even when she began her finance and accounting career. A lot, however, can change in two decades. Farah, who is a partner and the tax global compliance and reporting leader at EY, has spent the last 20 years advising clients on corporate tax, audits and investigation, and transfer pricing projects. She is also the current president of the Chartered Tax Institute of Malaysia (CTIM) – only the second woman to hold the position.

‘I didn’t think of tax when I started my career, but I was persuaded to try it out. Maybe because I was young, I didn’t think much about the options that were available then. Today, I’d probably have a lot more questions, but at that time, I thought why not give tax a try,’ says Farah, confessing that she never fully embraced the discipline when she was at university.

‘It was very theoretical – a case of reading to understand the tax system, breezing through the exams and scoring,’ she admits. But as she became more involved in the work, her initial apprehension and earlier disinclination faded; you could even say that she developed a passion for it.

‘When I began pursuing tax as a career, I thought it was very interesting. It’s alive, dynamic and very applicable to business,’ she says. ‘I was working on a whole suite of tax issues, from transfer pricing to corporate advisory to incentives and structuring.’

One of the turning points in her career came when she was involved in an engagement to assist a foreign company in the tax restructuring of its investment in Malaysia. ‘The company was exploring various jurisdictions to expand its business. I went in with the team and brainstormed on the most suitable structure, the tax implications and the best positions to adopt in respect of the business expansion,’ Farah recalls. ‘The work involved understanding the business strategy, taking into account practical considerations and interpreting the tax legislation and rulings available to lend support to the recommendations. The matter was then presented to the company’s management and its board, and subsequently the company implemented the recommendations and executed its business plans successfully and effectively.’

Over the past two decades, Farah has conducted group tax reviews and planning, incentive applications, and tax audit and investigations for local and crossborder organisations. She has also conducted analytical studies of incentives and special packages, and assisted multinational corporations including many Fortune 500 companies in location studies. In addition, she has reviewed specific tax issues faced by different industries.

‘I have grown to enjoy the work that I do,’ she says. ‘I’ve enjoyed the different perspectives that the tax profession has given me, and the dealings with the different authorities, officials, clients and their various industries that they are in, from corporates to individuals. I have enjoyed seeing how the team has grown and how we have helped them move up the ranks and do good for themselves. I’ve also enjoyed seeing the evolution of the tax legislation globally and in the country – how it has changed and is continuing to evolve.’

Of this change, one aspect that she feels is important is the reform and modernisation of the country’s tax system to meet its needs in the 21st century.

‘A modern tax system needs to be clear, consistent and transparent,’ she says, adding that there has to be trust and confidence in the system so that taxpayers will be more willing to support it in the knowledge that the tax collection will be used for the development and growth of the nation.

She is also optimistic about the work of the country’s Tax Reform Committee, established in 2018. ‘The committee is looking at reforming the country’s tax system and some of the areas being considered include whether new taxes should be introduced and whether the tax system should be made simpler,’ she says.

Transparency in the tax system is crucial, she reiterates. ‘This means that taxpayers are able to know and understand the interpretation of the law, and apply it consistently. It should not be a case of different taxpayers being treated differently, or for a transaction by one particular company to be taxed but not another,’ she says, pointing out that often, such discrepancies may occur because of how the law is interpreted.

‘If the law is too complex, then a business person would not be able to understand, appreciate and apply it,’ she says. ‘They may seek the assistance of tax professionals or associations, but at the end of the day, taxpayers themselves need to understand how to apply rules and be responsible for their own tax affairs.’

Farah says that another pertinent issue that needs to be addressed is the fairness of the tax system. ‘It is a certainty that you have to pay taxes, but on the question of fairness, there is a need for a broader tax base to capture a larger number of the taxpaying population,’ she says. ‘This needs to take into consideration the current needs of the economy and its impact on businesses and taxpayers.”

Widening the tax base, she points out, would mean more people are contributing, which would in turn support the development of the country.

‘If you look at tax collection as a percentage of GDP in the OECD countries, it’s 25% to 30%, whereas in developing countries it’s about 15% to 20%. This means developed countries have more resources from tax that can be used to generate economic growth,’ she says.

But are taxpayers willing to pay higher rates? This, she says, circles back to them being aware of their responsibilities, understanding the system and being willing to pay the right level. ‘It’s not about paying less or more, but the right amount of taxes; it must be equitable and it must be fair. You shouldn’t need to pay more than you should, neither should you evade and pay less,’ she says.

Taxes can also be used to encourage certain behaviour, says Farah. ‘If, for example, you want the business to develop, you could offer incentives on research and development. If you want to automate or hire skilled workers, you could give certain incentives to grow the business. These can be in the form of a reinvestment allowance or a tax deduction,’ she says.

What, then, does she make of tax avoidance and the ethics and morality of the practice? ‘Ethics to me is about judging what’s right or wrong. Businesses can plan their affairs such that they are not breaching any of the tax rules or regulations,‘ she says, conceding that when there is uncertainty and various interpretations are available, then ‘people will end up with options that may be more optimal or advantageous to them’.

‘You can vary the transaction so that you have an optimal tax position that is commercially driven, efficient for the business and supportable based on the interpretation of the law. But when you stretch an argument and you start to manipulate the law and breach the rules, then that’s when it becomes unethical. So, at the end of the day, as a tax professional, you have to put your hand to your heart and ask if this is something you can happily say is the right interpretation of the law. Is it too complex that no one understands it? And if you don’t understand it and your client doesn’t either, how can you say then that it’s an ethical transaction?’

Farah believes that information sharing and knowledge dissemination are crucial to addressing many of the issues surrounding tax, whether they relate to instilling trust in the system or to professionals exercising the right judgment. In this, stakeholders such as ACCA and the CTIM have a role to play, whether through talks, seminars or workshops.

A firm believer in supporting the next generation of tax professionals, Farah was responsible for initiating the EY Young Tax Professional of the Year programme in Malaysia in 2013. Globally, the programme started in 2011, and to date 30 countries in the network have come on board. ‘I support this because it raises awareness of the profession and encourages our young ones to consider a career in tax,’ she says. ‘It also helps improve understanding and shows how tax professionals can help businesses and taxpayers manage their affairs better.’

What’s next for Farah? It’s a question she struggles to answer initially, but after some thought, she says the prospect of taking on new roles and learning new things excites her. She relishes her roles with EY and the CTIM, and takes the weighty responsibilities in her stride.

‘I truly believe that you have to be focused in what you do and you need to continue to learn and be current,’ she says. ‘Being focused isn’t just for work matters but everything – whether you are dealing with a client or you’re with your family. I believe that you have to do the best for your family, your clients and colleagues, and you also have to take care of yourself in order to give your best. All this comes back to being focused. This focus gives you the ability to think straight and deliver the best.’

Farah Rosley is a partner and the tax global compliance and reporting leader at EY in Malaysia. She has more than two decades of experience handling a variety of tax audits and investigations, incentives, corporate tax, transfer pricing and structuring assignments. Her knowledge and experience cover industries including services, telecommunications, property development, construction and manufacturing.

A regular speaker at conferences and seminars, Farah has also participated as a key member of special government initiatives and studies on specific tax matters and policies for industry sectors. In addition, she has authored many articles and commentaries for various publications.

A bachelor of science (hons) graduate in accounting and finance from the University of Hull in the UK, Farah is an FCCA and is president of the Chartered Tax Institute of Malaysia.

EY in Malaysia has a network of more than 590 tax professionals across 16 locations serving a broad range of clients across all principal industry sectors and market segments nationwide. The practitioners blend local country technical knowledge with appropriate regional and global insights on the latest developments in tax policy, legislation and administration – offering leadership in all tax disciplines, including business, indirect, international and transactional.