Political, social and business issues are now merging as never before in our world, and there’s a role for all of us to play 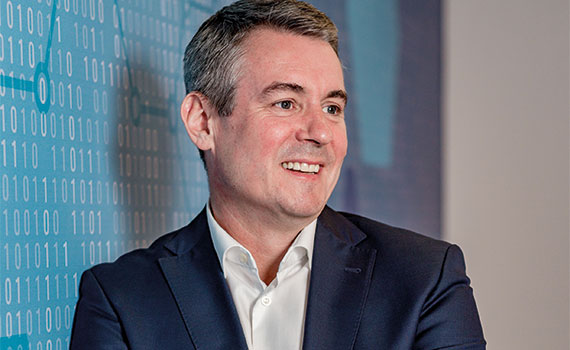 This article was first published in the April 2020 Ireland edition of Accounting and Business magazine.

The offices of EY Ireland on Harcourt Street have been part of Dublin’s corporate landscape since long before the world’s finance and technology giants made the Irish capital a cornerstone of their operations. Step inside, though, and it’s quickly clear that the accounting and consultancy firm is in lockstep with the world rapidly changing around it.

Wavespace is the latest example of EY’s commitment to capturing the zeitgeist of 21st-century business. Opened in February 2020, this innovation centre features a state-of-the-art auditorium, design studios and an emerging technology lab, and is conceived as a hotbed of solution finding and co-creation.

Side by side with the launch of Wavespace, EY Ireland is rapidly expanding its headcount in technology and innovation. Last year, it announced its 3,000-strong workforce across the island of Ireland would be boosted by a further 600 recruits. While EY will continue to actively recruit for traditional skills sets across its core areas of business – in tax, audit, advisory and financial transactions – it is now also seeking to recruit those with skills in data science, artificial intelligence and emerging technologies. Given the challenges that 2020 has already visited on the world, it’s a safe bet there’s a busy schedule ahead for those who can bring substance to complex problem-solving.

‘Wavespace is a significant investment by all our partners, but that investment is really for our clients,’ says Frank O’Keeffe FCCA, managing partner, EY Ireland. ‘It’s a fantastic space but the real magic is in the people and the technology. It will help to deliver world-class solutions around strategy, new markets and new businesses.’

If Wavespace is emblematic of an organisation that is increasingly client-focused and market-oriented, the same philosophy may be said to apply to O’Keeffe in his leadership role. Appointed managing partner two years ago, he ranks customer focus among his highest priorities. ‘Since 2018, I’ve concentrated on three things: first, the marketplace and really listening to our clients, understanding what their needs are, not just today but in the future; second, recognising it’s all about our people, how we identify talent in the business, nurture and mentor it; and third, my role in chairing the operations of the business. I spend a considerable amount of time thinking about where we want EY to be in the next three to five years, and what investments we need today to make that happen.’

Back in 2010 when AB Ireland last caught up with O’Keeffe, he was a year into the role of partner in charge of EY’s Entrepreneur of the Year Award, a connection that would continue, alongside the ‘day job’ of audit partner, until 2014. While Ireland’s economic headwinds at the time were bleak, O’Keeffe was far from downbeat about the country’s prospects. ‘Part of the excitement and ambition I had for Ireland was from my involvement with entrepreneurs,’ he recalls. ‘They are a phenomenal barometer for the economy in general. I was interacting with people who were going around the world, building new relationships and new markets, and being value creators back here in Ireland.’

He took the profound impact of that experience – in particular, seeing up close how entrepreneurs ‘created businesses and jobs, assessed risk, and attracted the best people in their organisations’ – into his next role in EY.

Promoted to head of assurance in 2014, over the following four years he oversaw an effective doubling in size of the firm’s operations in terms of headcount, revenue and clients. Pivotal to that success is the deeper understanding of relationships and building trust, as well as the value of calculated risk, that he garnered from that experience with entrepreneurs.

‘We are in a people business,’ he says. ‘People buy people and they buy trust. During those four years I really honed my craft around culture and around leading large teams, high-performing teams and partner groups. By 2018, we were effectively the largest assurance practice in Ireland.’

EY Ireland’s assurance team today numbers no fewer than 1,000 auditors. While new services such as Wavespace are important to the future, O’Keeffe is clear where EY’s core offering lies. ‘Accountancy and audit are the foundation of the EY brand and will always be the bedrock of our business,’ he declares. ‘Currently 50% of our business in Ireland is in assurance, which is predominantly accountancy and audit-based, and 50% is around the other services we offer, including corporate finance, taxation and consultancy.’

In addition to creating its own revenue streams, new technology directly affects how that offering is delivered. ‘What puts EY at the fore of technology and digitisation is how we work with data for the benefit of our clients. We are focused on using data, analytics and real-time solutions across all of our traditional offerings in audit, taxation, finance and consultancy to deliver an exceptional service,’ he says.

Having presided over strong growth in his current and his previous roles, and with ambitious targets set for the years ahead, O’Keeffe is at pains to stress that the firm’s achievements are collective ones. ‘When you’re in the unique position I am, with an equity partnership of nearly 100, there’s a huge amount of trust involved. The most important word in my role is “team”, and that’s about respecting, trusting and understanding the skillsets of our key leaders across the organisation, and also making sure we have a level of culture in our business where we are entrepreneurial but also realistic.’

If there ever was a time when the success of a firm like EY could be measured purely in terms of turnover and growth, that time is emphatically gone, O’Keeffe says. ‘What’s vitally important to me, as managing partner, is to preside over not just the performance of our business but the health of our business, and that’s all about sustainability’.

In organisational terms, that ambition is reflected in EY Ireland’s goal to be carbon-neutral by the end of this year. However, O’Keeffe sees sustainability as a much broader remit.

‘Political, social and business issues are now merging as never before in our world, and there’s a role for all of us to play,’ he says. ‘When I think of our purpose of building a better working world in EY, that extends to the communities and cities we work in and to the wider planet. We have to collaborate more to truly respond to the distinct societal and economic challenges we all face in the places we live.’

If his connection with entrepreneurs informed his thinking about growth, then key to this expansive vision is the role he has played in EY’s diversity and inclusion programme. ‘Setting up our diversity and inclusion programme was one of the highlights of my career,’ he says. ‘Our objective was to ensure that when people were walking through the door every day, they were comfortable to be the best of themselves and to be themselves. What’s been nice over the years is the external validation that programme has received, in terms of the accolades and awards, but what’s key is how we feel as an organisation, and that makes me feel really proud.’

As an ACCA member, O’Keeffe has no doubts that the qualification has a major role to play in delivering the kind of mobility and flexibility that professionals now widely aspire to.

‘One of the things that attracted me to ACCA was the sense of it being an international passport that gives you the discipline and tools to take on multiple challenges. I know a significant number of ACCA members who have gone on to do amazing things, often in completely different sectors. The training and professionalism it provides is world class.’

A decade ago, O’Keeffe struck an upbeat note as he assessed the country’s then unprecedented economic challenges. In a new decade, with fresh storms brewing, what are his expectations? ‘A number of geopolitical and global matters are going to be highly significant for Ireland in the coming year,’ he says.

‘In terms of Brexit, it is vitally important we get the right trade deal. We have elections coming in Germany and the US that will be very important, and we have the coronavirus, which is already impacting on the global economy, especially supply chains. I remain an optimist but the world is getting more complex every day. We need to make sure Ireland stays flexible, open and competitive for our economy to thrive, for businesses to thrive and for people to be able to work, and enjoy their work, and for all that to have a positive social impact too.’

"Political, social and business issues are now merging as never before in our world, and there’s a role for all of us to play"

2006
Becomes an audit partner with EY

2019
EY Ireland announces 600 new jobs across the island of Ireland, including more than 300 in Dublin

2013
The firm rebrands globally as EY

1989
Ernst & Young is created through a merger of the fourth and fifth largest accountancy firms in the world, which had been originally founded in the 1900s as Ernst & Ernst and Arthur Young & Co, in Ohio and Chicago respectively