From cybersecurity in the early days of the internet to IFRS adoption in Africa and now green finance consultancy, Joseph Owolabi FCCA is passionate about leading change 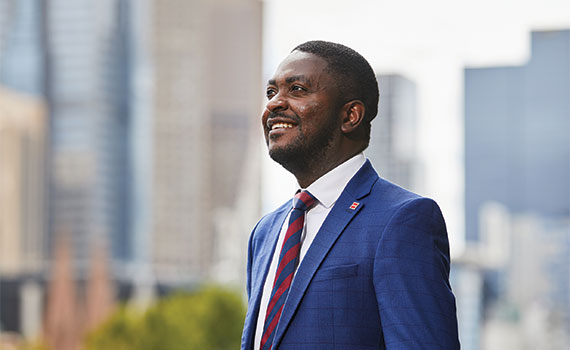 As 2019 drew to a close, Joseph Owolabi FCCA took a leap of faith, quitting a steady job with a Big Four firm in Melbourne, Australia to set up his own consultancy focused on climate change. At the time, the country’s catastrophic summer bushfires were raging, wreaking widespread destruction on many fronts and moving sustainability up the agenda.

‘Australia’s fires were not actually the inspiration for this step – before them South Africa, New Zealand, Indonesia, the US and many other countries had also been suffering from drought, bushfires and other natural disasters exacerbated by climate change,’ says Owolabi, speaking in an interview before the Covid-19 pandemic took hold.

Sustainable business is however an issue he feels passionate about. To adequately address global warming by 2050, he estimates that annual investment of around 1%–2% of global GDP (around US$1.7 trillion) is needed. He would like to see more companies explore various forms of green financing, such as green bonds, to invest toward meeting sustainable development goals (SDGs – see also page 28 of this issue) and ethical supply chain processes.

‘The greatest risk for any organisation these days is not the liability on its financial statements, it’s reputational risk,’ he says. ‘If you’re not a sustainable business, you erode investor trust – which is, in effect, the social licence to operate.’

Owolabi’s interest in sustainability is one of a number he has developed over the years while working with some of the world’s largest companies, SMEs and not-for-profit organisations. His firm, Rubicola Consulting (which opened for buiness in January this year), was, he says, born out of a desire to address a number of gaps he had observed along the way.

Named after Melomys rubicola, the first Australian mammal thought to have become extinct as a result of climate change, the company’s focus is on assisting CEOs and boards to identify new and emerging risks from climate disruption while implementing strategies for sustainable business models. Already, it is assisting an unlisted Australian company working towards its IPO, as well as a New Zealand company looking to raise venture capital funding.
The consultancy is the latest development in a career that has seen Owolabi hold leadership positions in three of the Big Four firms and becomea recognised thought leader for the profession.

Clearly, he was always a bright spark. The youngest of three siblings from a middle-class Nigerian family he was a top student at high school in Lagos and at university.

If not for a serendipitous moment in time, however, he might have ended up pursuing a quite different career, possibly even on the front line in the battle against the coronavirus – he had initially planned a career in medicine, and was studying at the University of Lagos College of Medicine when a fellow student planted an altogether different seed.

‘My friend had a brother working at KPMG, and said, “You should join one of the big consulting firms and solve complex problems – those guys will train you and help you grow into a true professional.”’

Attracted by the prospect, Owolabi read up about consultancy firms, and the idea caught his imagination. At the time KPMG was scouting universities for top talent in any academic discipline. It was enough to persuade him to alter course for a career in advisory – although ironically KPMG is the only one of the Big Four he has not worked for.

The decision to change direction took him on a journey along a road less travelled: to pre-empt cybersecurity risks when the internet was still quite new; to be a pioneer of IFRS Standards adoption across sub-Saharan Africa; and most recently – and most pressingly, he says – to act as a global sustainability champion.

After graduation, and a year of compulsory national service, Owolabi accepted an offer in banking. But consultancy as a career option kept nagging. As a ‘bit of a futurist’, he was already interested in IT audit risk, systems and processes. In 2007, an offer to join PwC’s graduate programme came at the right time. ‘I seem to have a flair for anticipating services and solutions that will trend in the future,’ he says. ‘The first revolution I anticipated was cybersecurity.’

While at PwC and simultaneously studying for the ACCA Qualification, he developed skills in global financial reporting standards. After completing his ACCA exams, he taught financial reporting subjects and the Diploma in IFRS module at an approved learning partner, further consolidating his mastery of IFRS. So when the International Accounting Standards Board moved towards bringing all countries together on a single set of global accounting standards, Owolabi was ready to step up.

Progressing to a role as a capital markets and accounting consultant at PwC, he worked closely with professionals from South Africa and Europe to help African companies understand the impact of IFRS, and build capacity and competence in their finance teams. At the age of 27, Owolabi was on his way to building a global career.

His interest in sustainability began when a senior PwC manager proposed a Nigerian equivalent of the Sarbanes-Oxley Act, the legislation which introduced auditing and financial reporting regulations for all US public companies. Owolabi put up his hand to assist. During his research he discovered that some countries were already thinking beyond narrow financial reporting.

Over the next few years, he noted that multinationals operating in Nigeria were also reporting on their environmental impact and community engagement, even though there were no local guidelines for non-financial reporting. ‘I wanted to see how I could play a role in the adoption of sustainability reporting in Africa,’ Owolabi explains.

An opportunity, though, didn’t arise until 2014, when a conversation with the managing partner at EY West Africa led to his appointment as the firm’s climate change and sustainability services leader for the region.

In that newly created role, Owolabi helped the Nigerian Stock Exchange develop guidelines for sustainability reporting, and the Federal Government of Nigeria in reporting progress on its emissions reduction commitments under the Paris Agreement. He was also involved in the listing of the first sovereign green bond from an emerging market.

By now Owolabi was keen on moving across the world to Australia – a country where there is plenty to be done on sustainability issues. With more than 200 listed Australian companies operating in Africa, he was also excited about the potential for growth in trade and business ties between the two continents.

In particular, he sees opportunities for collaboration between Australia’s mature mining industry, and Africa’s largely untapped resources sector, which is expected to contribute significantly to sub-Saharan GDP over the next 10 to 30 years. Already, Australian investment in African mining projects is valued at more than A$40bn (US$26bn), he points out.

Among other areas of potential, Owolabi says Africa’s nascent banking sector can learn from Australia’s 2017 investigation into misconduct in the banking, superannuation and financial services industries, which reported early last year. And with Africa’s tech industries on the rise – attracting significant investment from Silicon Valley, the UK and other parts of the world – transferring knowledge and collaborating on cybersecurity and artificial intelligence offer plenty more opportunities, he adds.

In 2017, following a lead from an ACCA connection, Owolabi joined PwC in Melbourne, Australia’s second biggest city, as a senior manager in its capital markets and advisory services business unit. A year later, he was headhunted to be a director with Deloitte Asia Pacific.

In these big-time roles, Owolabi was involved in major capital market transactions, including Viva Energy’s A$2.65bn (US$2bn at the time) IPO – Australia’s biggest stock market launch in four years, and Wesfarmers’ spin-off of its Coles food and liquor business. He also assisted Telstra, one of the largest telecoms companies in Asia Pacific, in implementing the new leasing standard IFRS 16 for over a million lease contracts in its portfolio.

It’s been a rollercoaster ride, but Owolabi still finds time for other activities. Now, as well as running his own business, he is board chairman of the not-for-profit organisation Australian Sickle Cell Advocacy, which provides awareness and support for people with sickle cell anaemia, an inherited red blood cell disorder.

He is also actively involved in ACCA. He was a network panel member in Nigeria for three years and in Australia/New Zealand for two, and is presently a member of ACCA’s Council, to which he was first elected in 2015. He also mentors ACCA students. ‘ACCA has given me so much, and I am honoured to give back where I can,’ he says.

In an era where accountants are, as he puts it, ‘compelled to focus on outcomes’, Rubicola’s founder believes there is ‘overwhelming evidence’ that creating sustainable impact will deliver better returns in the long term. So what does he have to say to climate change deniers?

‘Look at the world around you,’ he declares. ‘The effects of climate change are there for anyone to see.’

"The greatest risk for any organisation now is not the liability on its financial statements, it’s reputational risk"

The business case for sustainability

According to Owolabi, sustainability reports provide ‘an amazing opportunity for organisations to revisit their strategy statements – mission, vision and purpose. Boards and audit committees should review their corporate risk register to determine if climate-related risks have been captured and their response articulated and implemented.’