For KBC Bank, new technologies are key to its plans to shake up the banking market, as the challenger bank’s director of products Darragh Lennon FCCA explains 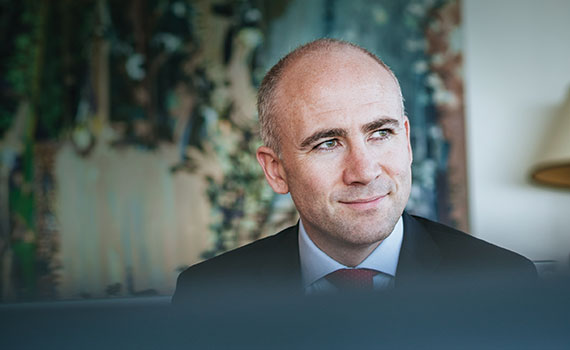 This article was first published in the January 2018 Ireland edition of Accounting and Business magazine.

If the story of Irish banking has largely been one of survival and consolidation over the past decade, it has also been one of surprisingly effective change management. While a return to full health may still be some time off, Ireland’s banking sector has defied the odds – and the critics – and today shows a level of confidence and competition not seen in almost a decade.

While incumbent banks still hold a position of advantage, Irish banking’s almost seamless transformation from on-street to online has given KBC Bank Ireland and the other challengers a unique opportunity. The lender has been present in Ireland in various guises since the 1970s, but 2017 was a pivotal year for its presence here, as that was when its Brussels HQ designated KBC Bank Ireland a core part of its operations.

A vote of confidence in the economy the designation may be, but it also reflects the strong financial returns delivered by the Irish division. In 2016, KBC Bank Ireland reported a net profit of €227m and a 70,000 increase in customer numbers.

Darragh Lennon FCCA, the bank’s director of products, declares: ‘KBC is now Ireland’s leading challenger bank and we like to think we are in a strong position to shake up the market. We’ve been successful in building our customer base to approximately 250,000 to date and we want to grow it to around 400,000 by 2020.

‘To do that we are very much focused on a digital-led customer strategy, which means giving consumers a really first-class online offering.’

As an example of what he means, Lennon points to what he says is a first of its kind: its recently launched current account onboarding app. ‘Using various elements of IT – for example, facial recognition – you can now have an account opened and digitally provisioned in five minutes and five easy steps from your smartphone,’ he explains. ‘Bringing that kind of insight and innovation to our services is key for us in delivering on customer expectations.’

While a more fluid and competitive banking sector is seen as a positive by most consumers, Irish people have historically shown a marked reluctance to play a part in bringing this about. The Central Bank’s 2010 code of conduct on bank account switching has made the process of moving providers easier, but has failed to prompt any large-scale changes in behaviour. Central Bank data from 2015, for example, shows that, over a six-month period, a paltry 5,400 of the country’s five million current accounts were switched to alternative banks.

Lennon recognises that persuading consumers to move is central to KBC meeting its aim of capturing a 10-15% share of the market. In the absence of a more progressive code of banking practice or a change in consumer culture, he says that KBC’s approach will centre on listening to consumers: ‘People want immediate access to products and very quick decision-making. We are working, for example, on a three-hour mortgage approval process. We also recently extended our contact centre hours to 24/7, and there has been a really positive reaction to that.’

While online and phone are now the key access channels for banking, KBC recognises that the on-street presence cannot be phased out entirely. ‘There are certain interactions where people still want to engage face to face,’ Lennon says, ‘but we don’t think we need 60 to 70 branches nationwide to manage that; we think it’s more like 16 hubs.’

One such hub, recently opened in Blanchardstown Shopping Centre, Dublin, was a further opportunity for the bank to differentiate itself from its competitors. ‘Our view is that we should be open when the shopping centre is open, so we are going to operate to hours that suit our customers rather than traditional banking hours,’ Lennon says.

A quirky advertising campaign, courtesy of London-based agency 18 Feet & Rising, has further steered the bank clear of the somewhat self-important messaging favoured by Irish financial institutions. ‘As a brand, we don’t want to look or feel the same as other banks,’ Lennon explains, adding that, for all its millennial vibe, the advertising isn’t necessarily aimed at a younger audience. ‘Our customer base is very broad. In savings and investment, the base is an older demographic, while in the current account market, it’s younger. There’s nothing unusual in that and we find they all enjoy the difference in our marketing approach.’

It hasn’t been all light-hearted fare over the past year, of course. Like its competitors, KBC Bank Ireland has had to confront the ongoing fallout of customers being incorrectly moved off tracker mortgages. In November, it revealed it had set aside €54.4m to deal with the issue. Making the announcement, the bank said that it ‘fully acknowledges the past errors that occurred in relation to tracker mortgages should not have happened’.

A native of Bray, County Wicklow, Lennon graduated from University College Dublin with an economics degree and joined Irish Intercontinental Bank, which was the forerunner to KBC Bank Ireland. ‘I saw that a lot of my seniors were accountants and decided to pursue the ACCA Qualification. I saw it as having the most credibility globally. I’d travelled extensively in Australia before joining the bank and could see how it was valued there.’

In 2005, he took a leap of faith in joining the emerging accountancy practice MKO Partners (now EisnerAmper Ireland) as corporate finance director. ‘It was an incredible experience and I learned a huge amount from it,’ he recalls. ‘There were just eight people in the firm when I joined and 50 by the time I left. I got to work in places like Sweden and Singapore, and to set up private equity property funds – things I couldn’t have done without the ACCA Qualification.’

The decision to rejoin KBC in 2010 came in recognition of the opportunity the changed landscape of banking was presenting. ‘I felt it was a once-in-a-lifetime chance to learn. Having been there when things were on the way up, I wanted to be part of dealing with them on the way down.’

Appointed head of corporate recovery in 2012, he had the task of setting up a new division to deal with real estate corporate and SME exposure. ‘We didn’t have the process or people at the time, so key to the role was to build that up, structure it in a certain way and work with customers to make the best of difficult situations.’

In 2013, he became director of retail recovery and professional products, where the focus was on mortgage arrears and, he says, keeping as many customers in their homes as possible. ‘You are leading a team that is dealing with very difficult situations on a daily basis. There’s a great sense of achievement when you put a solution in place that works for the customer in the long term.’

Taking on the role of director of products in 2017, Lennon finds himself confronting Ireland’s property market in its latest challenging iteration – this time, with supply as the major issue. ‘It’s a situation where up to 50% of mortgage applications go nowhere because people don’t find a property,’ he explains. ‘Customers think once they get mortgage approval they’ve cleared the biggest hurdle, but they then go to the market and often find they can’t secure a property – that’s deeply frustrating for them.’

The challenges of housing notwithstanding, the positive overall direction of the Irish economy is reflected in KBC Bank Ireland’s plan to re-enter business banking this year. ‘We’ll be offering a full business banking service, one that will initially focus on the professional services sector. Our view is that other banks have been underserving their business customers.’

Lennon says that KBC’s enduring commitment to Ireland shows it is not opportunistic. ‘KBC sees the opportunity here, but it’s always seen it. The day after we announced that Ireland was a core part of the group, our group CEO Johan Thijs told staff here that KBC Bank Ireland doesn’t just have a staff of 1,100 working for it, it has 35,000 people, across six countries. We’ve been here in one form or another for 40 years, but we’re now in our strongest position ever in the market.’

"Using facial recognition, you can now have an account opened and digitally provisioned in five minutes from your smartphone"