ACCA Malaysia gave a warm welcome to UK-based members and students, as well as Malaysian employers, at an evening reception at The Adelphi in London 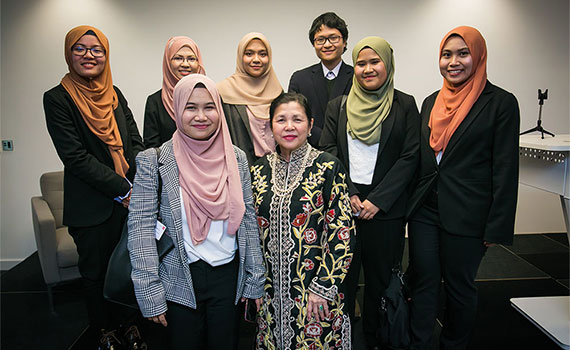 ACCA members, students and Malaysian employers gathered at The Adelphi, ACCA headquarters, in March for an evening of celebration and networking. Hosted by the ACCA Malaysia team, UK-based Malaysians were invited to the event, ‘Jom bersantai (Malay for ‘let’s chill’) with ACCA’.

Edward Ling, head of ACCA Malaysia, got the evening’s celebrations under way with introductions before handing over to ACCA chief executive Helen Brand, who shared ACCA news including exciting changes to the qualifications and ACCA’s 200,000th-member milestone. She thanked members and employers for their support, highlighting ACCA’s legacy of over 80 years of partnership in Malaysia.

Guest of honour was London-based member Mei Sim Lai FCCA. Lai is the representative deputy lieutenant of HM Queen Elizabeth II for the London borough of Brent, founder and principal of LaiPeters & Co and chairman of the Mulan Foundation Network, a charity that recognises the achievements of Chinese women.

Lai enthralled guests with her story of how she left Malaysia with a one-way ticket to the UK to become a respected professional accountant, setting up her own boutique practice in 2007 after many years as a partner in a mid-tier firm. She is a strong advocate of gender equality and champions women in the workplace, for which she was awarded an OBE in 2004.

This month, she becomes the chairman of the British Malaysian Society, a bilateral friendship organisation that enhances British-Malaysian relations – a fitting appointment for a woman whose myriad roles helping others touched all who attended the evening’s festivities.