The rise of e-sports offers opportunities around the world

Worth billions globally, the e-sports industry is gaining ground in the Middle East and Africa, with tournaments being held across the region 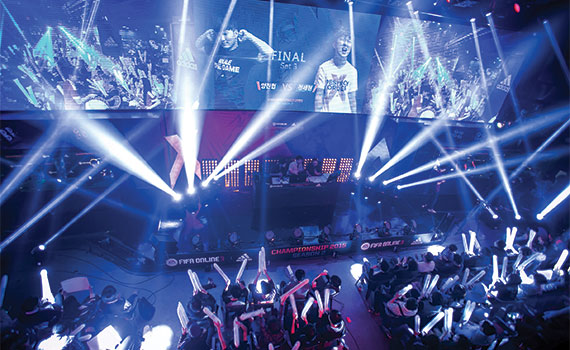 Not so long ago video gamers were seen as ‘not having a proper occupation’ by parents around the world, but this group can now earn millions in some regions as e-sports have transformed into a billion-dollar business. Market research and consultancy firm Ovum has predicted that the total value of the global e-sports market will reach US$1.9bn by 2022, bolstered by massive popularity among millennials.

E-sports are organised, multiplayer video game competitions, particularly between professional players. China, the US, South Korea, Sweden and Canada lead in terms of prize money won. However in other parts of the world the sector remains in its infancy.

‘In the Middle East and Africa, there are e-sports competitions with money prizes and sponsorships, but neither are yet at the global level,’ Cristina Liberal, an ICT analyst at BMI Research told Accounting and Business.

Still, both regions have significant potential. A relatively young population, access to technology, high levels of social media engagement, links to a common language and a solid base of interested and engaged core sponsors are some of the many reasons why e-sports are making inroads in the Middle East, say Steve Bainbridge, head of sports law & events management at corporate law firm Al Tamimi in Middle East, and Raj Pahuja, head of corporate commercial in Al Tamimi’s Bahrain office.

‘From a growth perspective, the United Arab Emirates (UAE) and the Kingdom of Saudi Arabia currently stand out as the markets to watch,’ say Bainbridge and Pahuja, ‘While the UAE has a strong reputation for developing and setting best practices and infrastructure for tournaments of all description, Saudi Arabia has a large population and its government is now also showing interest in e-sports.’

‘We would highlight the UAE and Saudi Arabia – [they have] high availability of broadband infrastructure, youthful outward-looking populations and strong sales of PCs in general but also high-end gaming PCs and dedicated consoles,’ says Liberal.

Bainbridge and Pahuja also note that the governments of the UAE and Saudi Arabia appear to be taking the lead in the region. The Dubai Future Foundation, for example, wants to develop a purpose-built X-Stadium to hold world-class e-sports events, while the Saudi Arabian Federation for Electronic and Intellectual Sports and the General Sports Authority have also committed to creating an all-inclusive ecosystem around e-sports in the kingdom – from game creators, graphic designers, publishers and broadcasters to tournament organisers, sponsors and professional players.

‘The recognition of e-sports as an official sport by the government has helped a lot, especially with parents, and has improved the overall reputation of gaming in society,’ says Reza Babaei, head of the secretariat at the Iran eSports Association. ‘Also, it has brought faith to the athletes that they’re doing a more serious job.’

‘The number of players in the region is rising. Currently, Iran and Saudi Arabia have massive numbers of players and these countries and also Lebanon and Jordan have had international achievements in term of professional e-sports titles,’ says Babaei.

Africa has also been touched by the rise of e-sports. The African Gaming League held its first tournament in August 2016 in four cities in Nigeria – Lagos, Port Harcourt, Uyo and Abuja.

‘For one, Liquid Telecom, the ISP subsidiary of Econet Wireless and owner of sub-Saharan Africa’s largest multi-market fibre-optic backbone network, is driving the rise of gaming and e-sports across [the region],’ says Liberal. Under a five-year initiative, Liquid Telecom is running and supporting continent-wide launch pads, forums and training sessions for game developers.

‘Countries that stand out in Africa include South Africa, Kenya, Uganda and Nigeria – [these have] high smartphone penetration (with the exception of South Africa) and high levels of engagement with e-commerce and digital monetary transactions/payments,’ says Liberal.

However, in the absence of a sound regulatory system, e-sports event organisers are still getting their bearings in the Middle East. ‘We have seen particular strength in e-sports at the grass-roots level although there is still work to do at the more elite level,’ say Bainbridge and Pahuja. ‘A number of successful events have been held, yet coordination between various leagues and event organisers has been elusive.’

This has given foreign companies a chance to tap into the market. Alisports, an arm of China’s technology conglomerate Alibaba Group, organised its first international e-sports championship tournament, World Electronic Sports Games (WESG), in 2016. This saw participants from 12 Middle Eastern countries and a total prize pool of over US$5.5m. Alisports started domestic recruiting for the third WESG in May.

‘For the previous WESG, even though Iran joined the event very late and [the organiser] couldn’t promote it very well, there was still a registration record of around 120 Dota 2 teams and 80 Counter-Strike: Global Offensive teams,’ says Babaei, referring to two of the more popular competition games.

Currently, competition organisers and leagues set their own rules for amateurs, which can vary greatly, but the E-sports Integrity Coalition signed up E-sports Middle East as a member last year.

E-sports may also need larger audiences to grow. ‘UAE has good infrastructure for everything and the presence of national investors and sponsors is great, especially in terms of prize money,’ says Babaei. ‘Their only problem is that the number of audiences is still very limited.’

Another key issue is the Islamic moral code. The Ministry of Culture and Islamic Guidance banned video game Dota 2 due to concerns over its appropriateness and the portrayal of female characters. This has led to changes in some game sprites – two-dimensional graphics that are integrated into a scene.

‘Cooperation from the game publishers on sensitive issues like this will make things much easier and help the community to be active and gain more audiences,’ says Babaei. ‘The problem is resolved for now but may come back in other ways.’

Bainbridge and Pahuja say: ‘Governments around the region are both security conscious and vigilant in protecting public morality from inappropriate content, so review mechanisms should be tailored to minimise inconvenience in the transmission of online content between various jurisdictions.’

Nonetheless, they add, ‘None of these issues create insurmountable challenges. In fact, the recent record of rapid growth and flexibility in other dimensions of sports and events activity in the Middle East suggests it could be an ideal location from which to lead global e-sports growth.’

As for Africa, Liberal believes the main obstacle there is the lack of funding and spending capacity, as well as the lack of reliable high-speed internet that would allow players to compete with other regions at the same latency levels. She adds: ‘In general, the biggest obstacle for both regions is the lack of sponsors, promotion, regular competitions and infrastructure to compete at the level of Europe, North America and Asia.’

As in any fast-growing technology-related sector, there are opportunities for accounting and financial professionals.

‘For e-sports startup companies, we can give them input in terms of how to work out a successful business model, build up the projections, [complete] business plans, and provide valuation services when they go out to the capital markets,’ says Cecilia Yau, China and Hong Kong Entertainment & Media leader at PwC. ‘Accounting firms can also help during the negotiation process with the investors.’

Babaei has not as yet seen demand for accountancy services from the sector. However, he says, ‘I think sooner or later e-sports companies will need accounting firms as it already happened for many big names in the market,’

‘I think for e-sports, it will be a B2B demand more than the B2C model, except the pro athletes who have contracts with their teams and their sponsors,’ he adds. ‘In the B2B model, beside the e-sports organisations, there should be many people who need accounting services such as organisers and involved sponsors.’

What’s all the fuss about?

It is not easy to make an online game that will be popular with amateur and professional players, a key requirement of commercial success.

There are four critical elements to a successful e-sports game: playability or enjoyment, which guarantees a scale of players and fans; watchability, including screen and pace; a highly competitive and balanced competition mode; and a usable networking system with a reasonable matching mechanism, says Zara Zhang, consulting associate director at Deloitte China.

‘Both industry practitioners and customers of e-sports are more likely to accept and embrace the cutting-edge technologies which may bring higher digital level and better watching experience relative to those of traditional sports,’ she says.

Because e-sports are typically played online, they have to be accessible on mobile devices and be suitable for live streaming so that customers can play anywhere and any time, which leads to higher customer retention.

E-sports can be far more entertaining for audiences than traditional sports not only because of a high level of professional competition, but also because of the many funny moments when things go wrong, as well as the crossborder nature of shows and the global reach of e-sports stars.

What’s more, unlike the long-term stability and rules of traditional sports, the most successful games have to keep changing to ensure users – the customers – maintain a continuous sense of freshness and enthusiasm.