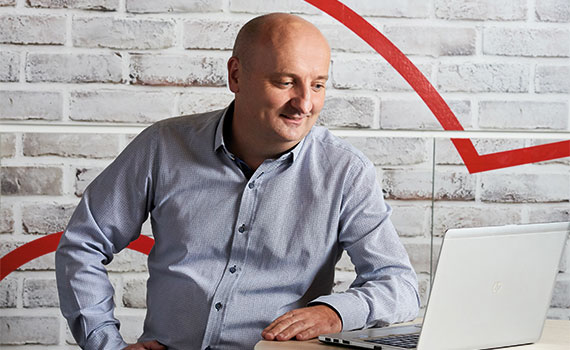 When he left Dublin on a gap year, with the urge to ‘follow the sun’, then-junior accountant Hugh Murnane had two passports in his possession.

One was the kind that enables international travel; the other was his ticket to funding the journey – an ACCA Qualification, which Murnane believed gave him the professional credibility to get work in any major city.

Most backpackers landing in Australia take casual jobs in pubs and the like, and while that ‘would have been appealing’, the now 46-year-old Murnane recounts, it didn’t pay much. However, a few months of professional contract roles in Sydney and Melbourne fuelled his Ford Falcon, financed the road trip, and would eventually bring him back to Australia where Murnane, FCCA, family man and resident of Sydney’s prime eastern beaches, is now chief financial officer Australia at Omnicom Media Group (OMG), a circa AU$2bn operation.

‘My older brother, who is also an accountant and FCCA, told me he felt it would open doors in business. Every big company needs a CFO,’ he reasoned.

So Murnane chose ‘the more efficient route’ – ACCA, a career passport which was portable and respected around the world.

After qualifying at Dublin Institute of Technology, Murnane worked first as an accountant at Arnotts, Ireland’s department store institution. Later, after returning from Australia, he built up the finance function for IT startup AEP Networks, an encryption specialist, from scratch.

There Murnane’s career blossomed, from head of finance at music giant Sanity, Virgin & HMV to CFO at Initiative Australia, a AU$300m media buying business, and then CFO for Oceania region at TNS, part of British multinational media company WPP, before moving to his present role at OMG.

OMG manages all the media agencies within global parent Omnicom Group, a diverse group with nine different businesses under its umbrella, each with its own executive team and individual CEO. Murnane sits at the top of the financial food chain, overseeing a team of 57 in finance and 13 in IT responsible for the management of millions of invoices a year.

On a typical day, his role is split 60/40 between finance and commercial operations. Commercial involves anything from being a sounding board for all business decisions, including hiring of staff, potential acquisitions, new business opportunities and bringing a financial voice to the OMG Australia management team and the OMG board of directors. ‘Both areas can require quite different skillsets but operational outputs feed directly into commercial decision making,’ Murnane said.

Getting it right is reliant upon three key fundamentals: processes, people and systems, all of which have been restructured during Murnane’s time at OMG.

‘We have robust, transparent systems in place where we measure everything, including giving daily reports on cash, debtors and creditors,’ says Murnane. So if any potential issues are flagged, they’re identified and worked through early on.

Media is a fast-paced and competitive business. Like the accounting profession itself, it’s also an industry in disruption. Advertising spots can change at a moment’s notice and clients might change their minds quite late in the day. Furthermore, it’s OMG’s job, as the advisor, to demonstrate bang for buck.

With traditional media, Murnane explains, it can be hard to quantify, for example, how many people have taken notice of a particular billboard. With online content, website optimisation provides the evidence not only of who clicks and when, but how long they stay there. Reflecting this trend, he says, Google and Facebook came from nowhere 10 years ago to become two of the group’s biggest suppliers now.

A lot of the group’s peer networks and clients have outsourced their finance function to external third party providers. This is a strategy that Murnane is cautious about engaging in, having seen the pitfalls that other businesses have encountered.

‘External providers can’t easily explain a query, and this can be quite frustrating to stakeholders,’ he says. ‘Finance departments need to understand the business, and that’s so much easier if they feel part of the business locally. People look at offshore outsourcing as a like-for-like replacement and that’s never the case.’

Speaking with other CFOs, he hears this view frequently, and finds that some companies, having tried outsourcing to countries such as the Philippines, India and Malaysia ‘have pulled up stumps and come back’.

He is a fan of digitisation, however, and is steering Omnicom’s finance function towards a paperless operation, which saves time and money.

The company’s accounting processes have also been streamlined, and the automation of some tasks has seen jobs growth in the finance team outpaced by other sectors of the business.

‘Data digitalisation is the big thing in finance at the moment – you need to be able to give them the numbers in a user-friendly fashion, and not just static numbers, but something they can drill into, go below the headline and see what’s making it up.’ Using this technology, he explains, ‘every OMG manager would have a dashboard to get analysis of a client’s revenue line, (and could) compare it to figures from last year, or the previous month, or to the budget’.

When he first came to Sydney in 2003, ACCA had a low profile in Australia. ‘It’s been a pleasure to see how it’s developed in that time,’ Murnane says. He believes the alliance with CA ANZ (Chartered Accountants Australia and New Zealand) is the right way to continue building ACCA’s brand recognition in this part of the world.

Outside of work, family occupies much of this father of three’s time. The Botany Bay playground of his three Aussie-born kids is a long way from Murnane’s own childhood home in Tipperary, Ireland, but things have panned out well.

‘While I remain proudly Irish and may never support the Wallabies (Australia’s national Rugby Union team), I truly love Australia and am appreciative of the opportunities and lifestyle it offers,’ he said.

"One of the best things finance can do for any company is to enable the business to work efficiently, and not occupy management’s time on day-to-day stuff"

The group is headquartered in Sydney, with branches in Melbourne, Brisbane, and affiliates in Perth and Adelaide.