As FD of the African Union, Assietou Diouf is bent on whipping its finances into shape, beating corruption, and executing Agenda 2063, Africa’s 50-year development framework 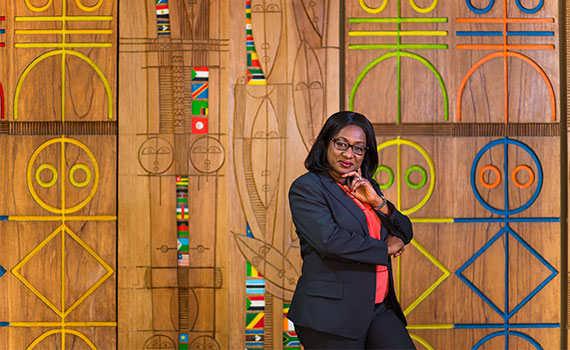 Driving the socio-economic transformation of an entire continent is an assignment that holds little attraction for lovers of the easy life. For Assietou Diouf, though – the woman responsible for managing the financial affairs of the African Union – it is all part of a formidable job.

As director of programming, budget, finance and accounting for the Commission of the African Union, Diouf is, in essence, the organisation’s FD. ‘Agenda 2063 defines the strategic objectives, initiatives and indicators to achieve inclusive growth and sustainable development on the continent over the next 45 years,’ she says. The ambitious framework is designed to ensure the African Union delivers on its vision of an ‘integrated, prosperous and peaceful Africa, driven by its own citizens and representing a dynamic force in the international arena’.

As the custodian of the African Union’s financial resources, Diouf says the work of her department impinges on all areas of Agenda 2063 to ensure that the right financial environment is in place to support its various programmes and that the budget aligns with the priority areas. Diouf says: ‘This requires us to work with internal and external stakeholders [including member states and development partners – international financial institutions] to ensure adequate resources are available to support the various continental initiatives.’

She is also responsible for implementing best practice in public financial management at the African Union and supporting member states and institutions to do the same.

Forget the notion that this is merely bland aspiration. The African Union has taken a tough stance on difficult issues such as corruption, and designated 2018 as African anti-corruption year with the theme ‘Winning the Fight against Corruption: A Sustainable Path to Africa’s Transformation’ – a theme also adopted by the 31st African Union summit, held in July in Nouakchott (the capital of Mauritania). Diouf says: ‘Corruption is often quoted as the cancer of the continent. It’s not a practice exclusive to the continent, but in the current economic and social context it does affect Africa’s development agenda significantly.’

The United Nations Economic Commission for Africa has estimated that between US$50bn and US$80bn a year is illegally earned, transferred or used, much of it through misinvoicing. The organisation says this retards Africa’s growth, weakens public institutions and the rule of law, discourages a culture of paying tax and adding value to natural resources, and results in overreliance on official development assistance.

Diouf believes the estimate illustrates an increased awareness of the scale and impact of corruption and says that the continent doesn’t lack initiatives to address the issue. As an example, she points to the Mo Ibrahim Index of corporate governance.

The African Union expressed its determination to win the fight against corruption by means of its Convention on Preventing and Combating Corruption, issued in 2003 and since ratified by 38 states. Diouf says: ‘It has been embedded in all continental frameworks and largely domesticated in national legislation and priorities.’

Beating corruption is just one element of the African Union’s work, however. At the 31st summit ministers of finance and heads of state and government discussed several key financial issues which fall within Diouf’s remit. Perhaps the most significant is strengthening the financial environment of the institution itself to support the self-reliance of Africa.

Diouf says: ‘The African Union has embarked on a reform of its own budgetary process by implementing a set of management rules – dubbed golden rules – and strengthening its governance structure.’

She reports that these measures have led to a paradigm shift and reduced the 2019 budget by 12% compared with 2018.

Rwanda’s president Paul Kagame, chairperson of the African Union, said in a speech at the summit: ‘This is the most credible and transparent budget in our history. As a direct result of the growing confidence in our finances, the African Union is in a position to work towards a long-term partnership with the United Nations Security Council for stable funding for peacekeeping operations in Africa.’

In another sign of growing economic progress, five more countries – South Africa, Namibia, Burundi, Lesotho and Sierra Leone – have signed up to the African Continental Free Trade Area (AfCFTA). It brings the number of AfCFTA members to 49, out the African Union’s total country membership of 55.

The other major economic issue under scrutiny at the July summit was migration. In recognition of the loss to the continent this causes, 2019 has been declared the ‘Year of Refugees, Returnees and Internally Displaced Persons’. Diouf says: ‘The aim of the 2019 theme is to bring attention to, and provide durable solutions to forced displacement in Africa.’

The budget may have been an acknowledged success but improving the African Union’s financial affairs remains a concern. Diouf’s mission is to financially transform the institution and work towards implementation of the African Union’s 2016 decision that all member states should impose a 0.2% levy on eligible imports to fund the organisation and ensure Africa takes responsibility for funding its own development agenda rather than relying heavily on foreign donors.

Governance forms another large part of Diouf’s role. She says: ‘As director of programming, budgeting, finance and accounting of the African Union Commission, my main responsibility is to act as principal adviser to the chairperson and deputy chairperson on these matters. I lead the development and implementation of financial and budgetary strategies, policies and management systems, and promote best practices in accordance with international standards.’ Her standards work includes the progressive implementation of IFAC’s International Public Sector Accounting Standards (IPSAS) framework.

Diouf is also accountable for the prudent use of the financial resources, the African Union’s budget and the management of its diverse portfolio of programmes funded by members states, donors and international organisations.

The role of the profession

As a qualified accountant, Diouf has views on the role that the accountancy profession can play in the African Union’s vision. She says that accounting is perceived as a powerful management tool thanks to the development of technology in general and the use of enterprise resource planning applications in particular. She says: ‘Financial reporting feeds, supports and influences the decision-making process.’

But she does not hold back criticism when she comes across shortfalls in professional duty. ‘Professional international frameworks have been developed and widely adopted as the best practices within the profession with a great emphasis on governance, compliance and ethics,’ she says. ‘The rising profile of accountants at all levels of the value chain has exposed some unfortunate cases of falsification, manipulation and misreporting of financial data, which can lead to inappropriate management decisions.

‘Accountants must be guardians of the integrity and accuracy of financial information for appropriate use by public and private stakeholders,’ she believes.

Given that statement, her view on the importance of the accountancy profession comes as no surprise. For her, bodies such as ACCA play a key role by raising and maintaining awareness of ethical values, ensuring that professionals come to work not just with the required technical expertise, but also ready to meet upcoming challenges.

She says: ‘In the context of Africa, where opportunities for continuous education, and access to information, technology and education funding remain a privilege for the few, a professional qualification requires dedicated commitment.’ The issue of the high cost of accounting education needs to be addressed, as does access to higher accountancy education funding, she believes. ‘We do not have enough training bodies across the continent so that we can train African accountants,’ she adds.

From her perspective as the African Union’s FD she would like to see Africa develop self-reliance through sustainable financing. On the whole, though, she is confident of what is to come. ‘I am conscious that there are great challenges ahead,’ she says, ‘but so far, so good. We’re on track.’

"Corruption is not exclusive to Africa, but in the current context it does affect Africa’s development agenda significantly"

Before joining the African Union in 2016, Assietou Diouf worked as a senior finance executive in Africa, Europe and the Middle East.

She started her career as a senior auditor in Paris, and also worked for BCEAO (the central bank of West African states), Crédit Agricole, and Barclays Bank. In all her positions, she has been instrumental in implanting international standards and regulatory frameworks in the finance function, including IFRS Standards, Basel II and III, and Sarbanes-Oxley.

A qualified accountant, she is a member of the French Ordre des Experts-Comptables and of Onecca (National Institute of Chartered Accountants of Senegal).

"As a result of the growing confidence in our finances, the African Union can work toward a long-term UN partnership for stable funding for peacekeeping operations in Africa"

According to Diouf, to achieve its Agenda 2063 ambitions, the continent must:

Address the challenges faced by Africa’s women and young people.

As a 50-year plan, Agenda 2063 will be implemented in 10-year phases, the first of which runs from 2013 to 2023. Each phase defines targets, strategies and policy measures to be implemented at continental, regional and/or member state level. At the end of each phase, there is a monitoring and evaluation process to assess how the continent is performing against its targets.

For example, under the Comprehensive African Agriculture Development Programme, African governments have agreed to allocate at least 10% of national budgets to agriculture and rural development, and to achieve agricultural growth rates of at least 6% a year. These targets are measured annually to track the level of execution and growth of the agricultural sector in each country, then consolidated and analysed.