The introduction of water charges prompted many protests, but two recent reports suggest the experience has given the government some lessons for future tax policy 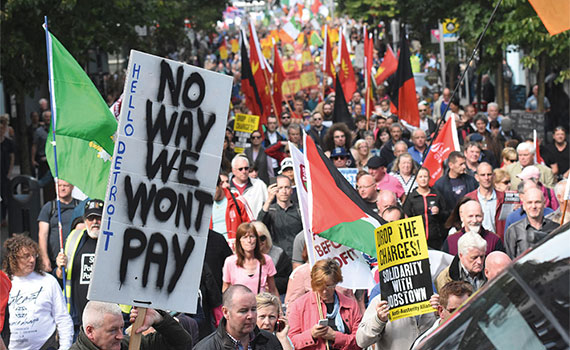 For some, it was an austerity measure too far, for others a charging regime that would bring Ireland into line with the rest of Europe. Whatever your take on water charges, few could dispute that their implementation was a PR disaster for the government, culminating in one of the most dramatic reversals of public policy in recent years.

Against a backdrop of widespread protest, the demise of the charges was also unusual for a number of reasons. Firstly, because they appeared to be gaining general public acceptance before being scrapped and, secondly, because the success of the campaign against them largely failed to develop any further political momentum.

With the issue receding from public debate, there is an opportunity for a dispassionate assessment, and recent investigations by public policy research units in two Irish universities have set out to examine why the water charging regime failed and to explore what lessons may be learned.

Jim O’Leary is senior research fellow at the NUI Galway-based Whitaker Institute and the author of How (not) to do public policy: water charges and local property tax. Published in September 2018, the report draws from interviews with policymakers, former government members and senior civil servants as it contrasts the failure of water charges with the successful introduction of the equally contentious local property tax (LPT).

While some limits to the comparability of the two are noted – one was a ‘relatively straightforward revenue-   raising exercise’ and the other ‘an ambitious, multi-faceted reform programme’ – the report argues that the complexity around water charges was largely ‘the result of policy choice’. It also points to a 2009 Commission on Taxation report that made a series of recommendations regarding both charges. However, while the recommendation around LPT were followed almost in full, those around water charges went largely unheeded.

Those recommendations included a gradual, phased rollout of the charges and a waiver system for low income households. O’Leary also argues that the intention that Irish Water should pass the Eurostat test and so be moved outside general government spending brought a range of consequences that ‘were not adequately anticipated by Irish policymakers’.

Eurostat’s classification methodology was ‘complex and elusive’ and ‘a treacherous basis for policy…In simple terms, it meant that the average household charge had to be higher than it would otherwise have been.’ He concludes that much of the decision making around Irish Water was ‘driven by a vision that would have been more appropriate for a seven-to-10 year timeframe than a three-to-five year period’.

Why the charges failed

UCD’s Department of Environmental Policy has also been investigating the issue, and a paper entitled You don’t miss the water ‘til the well runs dry’, also published in September last year, saw authors Peter Clinch and Anne Pender investigate the failure of the charges through the lens of public protest and opposition.

The paper argues that five factors ultimately proved decisive to the fate of the charges. These were: first, public acceptance of the concept of water as a human right and the argument that paying for services through general taxation protected this; second, poor levels of trust in government following the economic crisis; third, the personal values of water consumers, in particular the view that water provision should remain in public ownership; fourth, the way the charges were framed by government and protesters; and fifth, the timing of their introduction.

The UCD paper also elaborates on one issue that may puzzle future historians: the relatively high level of acceptance by the public before the demise of the charges. It argues that protests against the charges were representative of 30% of Irish households at most, while the remaining 70% were either Irish Water customers, or paying for water through group water schemes or privately-owned wells.

Both reports investigate the extent to which the fate of the charges was sealed by the results of the 2016 general election, with consensus that this was a culmination of events rather than a pivot point in itself. Although exit polls showed that just 8% of votes cited water charges as key to influencing their decision, Fianna Fáil support for the minority government that followed was contingent on the charges’ removal.

Clinch and Pender argue that, ultimately, campaigners against water charges won a decisive PR battle to present water services as a social good rather than an economic one, while O’Leary concludes that it was ultimately a lack of attention to ‘perfectly foreseeable events’ in the planning and implementation process that doomed the charges. ‘The overarching weakness of the policy position was that it sought to achieve too much too soon,’ he says.

Given that most of the pitfalls around the introduction of the charges had been anticipated back in 2009, the lessons for policymakers would seem to be painfully self-evident. While question marks hang over the sustainability of the current funding model, the UCD paper argues that ‘the political system will be extremely wary of returning to the water charges issue in the near future’.

The learning that consistency, clarity and fairness should be at the heart of any new revenue raising initiative may not be lost on policy decisions, but the lines around this particular battle are unlikely to be redrawn anytime soon.