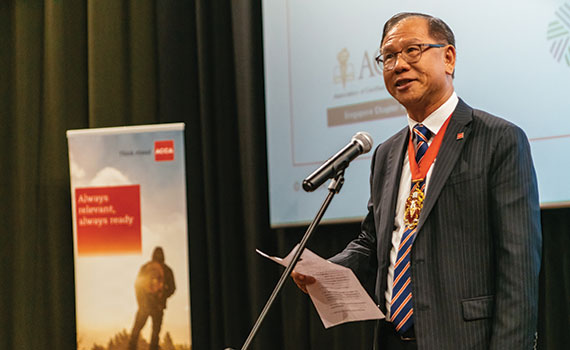 ACCA Singapore‘s second annual Ethics Film Festival, held in October, in partnership with the Singapore Film Society, aimed to raise awareness of the increasing importance of ethics in the profession.

This year, the event was extended to include Hong Kong and consisted of a series of documentaries that were screened across a two-week period in October. These included Banking on Bitcoin, a film about the digital monetary revolution, Big Men, which focused on oil discovery in Africa, and The Price We Pay, an exploration of the impact of tax avoidance. The festival was supported by the Association of Certified Fraud Examiners, CFA Society Singapore, Chartered Accountants Australia and New Zealand, Golden Village, and the Institute of Internal Auditors Singapore.

Coinciding with Global Ethics Day on 17 October, the Ethics Film Festival is just one of several events, including a number of breakfast meetings, that ACCA organised across the globe to shine a spotlight on the continued and growing relevance of ethics.

Speaking in a pre-recorded video which was screened during the launch event, Helen Brand, ACCA’s chief executive, said that it was important to think about ethical conduct in everything that we do.

‘Of course you have to think about it 24/7, 365 days a year. But having that one day in the year, where there’s a real focus and a retrospective look at what you’ve achieved and what you need to do better, is important for all of us,’ she said.

The opening address was given by Leo Lee, the then ACCA president, who noted that, as ACCA members, business leaders and finance professionals, the audience needed to recognise that ethics would always be at the core of their profession.

‘That is why we have the ethics and professional skills module in our ACCA Qualification to focus on developing vital and important ethical behaviours, and judgements to ensure finance professionals are equipped with the adequate skills to improve their employability and career success,’ he said.

Each film was followed by a discussion, with panellists talking about the ethical dilemmas facing accountancy professionals today. At the launch event, guests had the opportunity to observe as well as participate in a discussion about bitcoin and other digital currencies. Moderated by Dr Michael McMillan, director of ethics education at CFA Institute, the panel discussed hot topics such as the security of bitcoin as a currency, its investment value and what the Singapore government is doing in terms of regulation.

Part of the discussion drew upon the film’s example of Mt Gox, a cryptocurrency exchange that at one point handled more than 70% of all bitcoin transactions worldwide. McMillan asked the panel how, if bitcoin was based on the seemingly secure technology of blockchain, the loss of US$450m worth of currency could occur.

Panellist Zann Kwan, founder and executive chairperson for Bitcoin Exchange, took the opportunity to highlight the endemic issue of trust in centralised systems and said that in this case, it was not the fault of the technology but an internal control problem. ‘If you had transacted on Mt Gox and transferred the cryptocurrency to your wallet that you control, it would have been alright,’ she said. ‘People who had lost their cryptocurrency on Mt Gox left it on a centralised system.’

Caroline Lee, board member of the International Ethics Standards Board for Accountants and KPMG’s head of quality and risk management, Asia Pacific, also noted the presence of an ethical issue.

‘The Mt Gox platform originated from one for trading cards,’ Lee said. ‘So we’ve got to ask ourselves, how secure was the platform really? If you have a system that’s not well controlled, it gives rise to opportunities for abuse and misuse.

‘There has to be someone to stand up and say if the technology is being used in an ethical manner, and if the development has gone through a robust process.’

Yvonne Chan, CFO and director of corporate development at Maritime and Port Authority of Singapore, agreed, saying that in any means of exchange, ethical issues were bound to arise. ‘Cryptocurrency is the way now, and accountants need to cope with a new way that we may not be familiar with. We have a new evolved role as machines take over.’

In closing, Kwan noted that a crucial step in dealing with many of these issues was to raise the level of general awareness and education about cryptocurrencies.

‘The most important thing is to just start,’ she said. ‘Find out what a digital wallet is, what cryptocurrency is. Put $50 in it and see how to safekeep a decentralised wallet. It’s important to get your feet wet to see what it’s like.’

Kenneth Tan, chairman of the Singapore Film Society, which partners with ACCA to produce the Ethics Film Festival, talks about the synergies between the two organisations.

Accounting & Business: How did the partnership between ACCA and the Singapore Film Society (SFS) come about?
Kenneth Tan: ACCA first reached out to us in 2016 with this idea. It was a wonderful example of convergence as our treasurer and marketing director, Sherman Ho, who was leading the project from our end, is an accountant by training. In him, the festival found a movie buff and accounting professional rolled into one.

AB: How does the Ethics Film Festival tie in with the SFS’s objectives as an organisation?
KT: ACCA is a global body that upholds and furthers the highest professional standards in specialised technical practice, business ethics and good governance, while the SFS’s objectives are to promote film appreciation. I think the medium of cinema is a beautiful and timeless way to support a worthy cause because it transcends economic sectors, geographical territories, cultural and linguistic boundaries, and demographic differentiators.

AB: What did you think of the films being screened at this year’s festival?
KT: I am very happy that we’ve been able to curate festival line-ups that have been quite varied. This year, for example, we opened with Banking on Bitcoin, which is a Netflix documentary – a terrific reflection of the times. Such films are definitely growing in number, and I think it not only reflects on the need for public awareness and discourse, but also shows us that technology is democratising the process of storytelling via film. More people than ever are able to use film to convey their messages to greater audiences.

AB: You’ve been involved with the SFS for more than three decades. What sparked your interest in film?
KT: I’ve loved going to the cinema for as long as I can remember. In my teenage years, I became fascinated with not just the content of the movies, but also how cinemas scheduled their screenings, how studios marketed their new films, and how halls were designed.

AB: What role does SFS plays in the community?
KT: We bring partners together, including non-industry ones like ACCA. We help to navigate the complexities of the film industry, and that is one of the value-added contributions we make to festivals. It is very fulfilling to see people come and watch a programme you have curated, and see what those viewings and conversations build between people and communities.