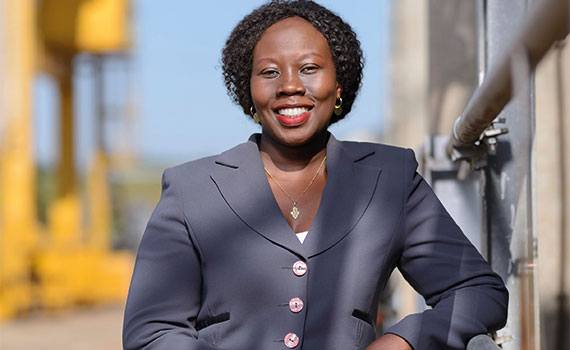 Josephine Ossiya FCCA is a woman of power in more ways than one. As CFO of Bujagali Energy she has had to dig deep and draw on all the skills she acquired from her ACCA training. Bujagali Energy owns Uganda’s largest hydroelectric power station, at Jinja on the shores of Lake Victoria. The company is a special purpose vehicle for a complex public-private partnership set up in 2004 to help close the growing power gap (which stood at 80MW when the project was in its planning phase) in a country where 97% of the population at that time lacked access to electricity.

As the only female CFO in the company’s history and one of just a handful of female CFOs in Uganda, over the years Ossiya has had to prove that women in finance in Africa mean business.

Her career to date has been varied, spanning international borders as well as industries. In addition to roles in the energy sector, she has held positions in telecoms infrastructure, banking, fast-moving consumer goods and utility companies.

It was the ACCA designation that gave her the grounding to move seamlessly between these industries. She says: ‘I chose the ACCA Qualification because it’s easily recognised across borders, and the training applies to all sectors.’

Ossiya’s professional training proved fundamental in changing the game for Bujagali Energy, which has faced major challenges around the high cost of the electricity that it generates. Crucially, that training gave her the skills to participate in the restructuring of the company’s debt, which was one of the strategies taken to reduce costs, and to implement a set of new strategies, processes and procedures to ensure compliance and control.

In 2016, there was growing public concern about the high cost of power in Uganda: industrial customers felt the price charged was prohibitive and discouraged economic growth. In the end, the Ugandan Manufacturers Association (UMA) appealed to the country’s president Yoweri Museveni, who promised a phased reduction in tariffs (user rates).

Ossiya agrees that the lack of government subsidy for electricity prices has affected the level of industrialisation in the country and the progress of rural electrification. ‘Electricity lines have been run, but people were not connecting to them because they found the connection and cost of electricity too high,’ she explains. The electricity tariffs are determined by the Electricity Regulatory Authority in consultation with the Uganda Electricity Transmission Company. ‘They have to be cost-reflective but as such they are not necessarily affordable to all,’ Ossiya points out.

Capital recovery for investments made in the sector plus other operational costs have to be factored into the tariffs charged. Along with the lack of subsidies, that pushes the tariffs up.

To understand the complexity of the issue for Bujagali Energy, you have to appreciate the financial architecture that underpins the the company. ‘Bujagali Energy is a public-private partnership with the government, which has itself invested US$20m in the power generating plant,’ Ossiya explains. ‘The government also plays a significant role by providing sovereign guarantees for financing for the project. During the hours of peak consumption, Bujagali Energy contributes approximately 48% of energy to the grid, so its costs make up a large portion of the final price charged to consumers.’

The tariff the company charges the government for electricity depends on a mix of components, such as the operation and maintenance of the hydroelectric plant as well as loan principal and interest repayments and other charges related to the project’s financing. ‘My company’s role is to ensure that the plant is available to generate power whenever required; as such, payment to the company is not based on energy actually delivered to the grid, but on the plant’s availability to generate power,’ Ossiya explains.

In a bid to address the UMA’s concerns, the government, together with Bujagali Energy, explored options for bringing the rates down. Together they concluded that the best option was to restructure Bujagali Energy’s debt. The debt was originally scheduled to be fully repaid by 2023, but in July 2018, after months of negotiation, the repayment term was extended to 2032. This significantly reduced the monthly principal repayment, which in turn cut the monthly pass-through costs to the government, and ultimately led to price reductions.

‘Now our hope is that demand from companies and local communities will rise and they will connect to the grid, which will be a huge boost for our economy,’ Ossiya says.

The second challenge facing Ossiya was to ensure that all the information and control needs of the company were being met, particularly as they related to the financial stakeholders in the public-private partnership. At the start of her tenure as CFO in 2014, she began to implement robust internal control systems based on her broad understanding of the public-private partnership concession arrangements, and the needs of the key actors involved in managing the Jinja power plant.

‘The complexity around controls and communication with key stakeholders was huge,’ says Ossiya. Implementing new controls required a strategic change management plan that could be sold to both the executive and Ossiya’s own staff. ‘Often, people think you’re making more work for everyone, when you’re really just trying to simplify the process and make it more efficient,’ she says.

As with any new initiative, training and building new skills were key. ‘Once my people understood how the new system worked, they began to appreciate it and eventually run with it. As for the executive,’ she adds, ‘it’s my job as CFO to demonstrate the cost benefit of any project, even where the benefits might not be quantifiable. Once you can do that, you start getting people to relax. The key thing was to understand their needs and be all-inclusive.’

Ultimately, she was able to harmonise the reporting to meet all the requirements of the board, and Bujagali Energy is now able to achieve near-100% compliance with regulatory and investor requirements.

Ossiya’s main objective now is to ensure the finances of the company are properly managed and the supply chain closely monitored so that Bujagali Energy can meet the demands of a growing economy. With the company’s debt load and controls in hand, she has turned her attention to more bread and butter responsibilities. She explains: ‘As the finance person, supply and logistics fall under my remit, so I have to make sure that all the spare parts are in place, that there are funds for labour and consultants, and that all the necessary permits are up to date. I have to make sure we’re collecting revenue on time, paying our suppliers on time, and of course anything related to working capital management. As CFO, keeping things running smoothly and ensuring the plant can produce at maximum capacity is always top of my mind.’

And as if all that weren’t enough, Ossiya is not only a member of the boards of the Bank of Uganda, Britam Insurance Uganda, Britam Asset Managers Uganda and Britam General Insurance Kenya, but also a partner in accountancy firm Rona & Partners and the owner of rice and turmeric processing business Mychere. By embracing finance and farming, she is helping build one of Uganda’s most modern industries while keeping her feet firmly planted in one of its oldest.

"Now our hope is that companies and communities will connect to the grid, which will be a huge boost for our economy"

‘Accountants need to pay attention to the detail of transactions, and be ready to dig down and investigate. At the end of the day when you provide any assurance you have to be sure that the transaction was authentic.’

‘Be forward thinking in terms of supporting your CEO and giving the right information, so he or she can make the right decisions.’

‘Get into all areas of management and strategy, and be sure you’re abreast of new technologies. Get your hands dirty when it comes to analysis and forecasting. Think about where you want to take your company, and put in the controls necessary to mitigate the risks.’

‘To be a CFO you have to have a very high level of resilience and, above all, to be fearless. If you think the deal isn’t good, you need to say so. After all, if anything goes wrong, the first person the chief executive will go to for answers is the CFO.’

Bujagali Energy (BEL) is a special purpose company with a complex ownership that includes investors led by Norwegian government agencies, the UK’s CDC Group, the Aga Khan Fund for Economic Development and Jubilee Holdings, based in Nairobi, Kenya. BEL has a mandate to build, own and operate the 250MW Bujagali hydroelectric power plant (valued at cost at US$902m), which it will transfer to the government after 30 years (in 2042).