A career in the hospitality sector has taken FD Sathyapal Nair FCCA around the world to the luxury Shangri-La Hotel, high in the towering pinnacle of London’s Shard 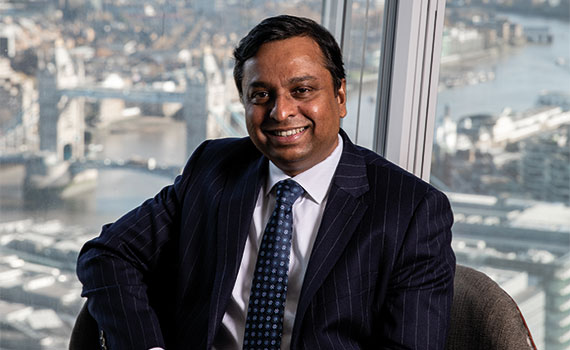 The Shard, built on the site of Southwark Towers, PwC’s former 24-storey London home on the south bank of the Thames, was already one of the most recognisable buildings in the country by the time it opened in 2013. At just under 310 metres high, it is the tallest building in the European Union (it can be seen from 25 miles away), but it is the striking glass design by the Italian architect Renzo Piano that really sets it apart. It may not be to everyone’s taste, but it certainly grabs your attention.

The building has had a rocky history. Its development was opposed by a number of heritage groups, there was a three-year delay in opening, and the 10 luxury apartments (£50m each, if you’re interested) at the top of the building are still unsold. But the view on a good day – in every direction – is staggering.

On floors 34 to 52 of the skyscraper, the Shangri-La hotel makes full use of this huge asset, with every one of its 202 rooms and suites, not to mention four restaurants and bars, wrapped in floor-to-ceiling glass. It is quite the workplace for the hotel’s director of finance, Sathyapal Nair – although he is quick to point out that much of the finance function’s work takes place at the business’s less vertigo-inducing administration offices on the ground floor.

This is the Shangri-La group’s first hotel in the UK and one of only three in Europe. The Hong Kong-based company, which has more than 100 hotels and resorts (operating under four brands) in 22 countries, predominantly in south-east Asia, took a 30-year lease on 19 of the Shard’s 95 floors when the building opened. The emphasis is firmly on luxury: rooms start at around £400 a night, rising to £11,000 or so to sleep between the 1,000-thread-count sheets at the Shangri-La suite.

Opening a new hotel as part of an iconic Asian brand, in an iconic London building, was a significant step for the Shangri-La group, with no guarantee of success in the highly competitive London hospitality market. ‘We are a flagship property for the group, very high profile,’ says Nair. The pressure for the hotel to be a financial success in difficult conditions must be intense. So far, the Shangri-La At The Shard has not made a profit, although room occupancy rates have been steadily rising and stood at 79% in 2017.

While Nair reports to the group CFO in Hong Kong, the hotel at the Shard is, essentially, an autonomous business. ‘It’s what I would call a self-accounting property,’ he says. ‘I am responsible for all the finance work here, including tax returns and the statutory audit. My typical day is like a meze plate, a little bit of everything.’

He runs a finance team of 13 in London, including three who work on procurement. ‘Everyone in the team participates in everything we do, though. I want to give them all exposure to all parts of the business. It’s good for them, and it’s good for the function too: if someone goes on holiday, there is always someone there who knows how to do their work. I see us as a Formula One team – I might be the driver but it takes all of us to win a race.’

Nair’s focus since joining the hotel has been firmly on controlling costs and driving up revenue. He has had visible success: revenue from rooms increased 11% between 2016 and 2017 (to US$29.3m) and the two critical measures of success in the hotels sector – average daily rate and revenue per available room – rose by 6% and 11% respectively over the same period. Even so, the hotel still made a net loss of US$15.2m in 2017. But its finance director is confident. ‘We have a strong focus for the next few years and we have support from head office.’

Nair is clear about the Shangri-La’s unique selling points. ‘We have a great location in a very vibrant neighbourhood, we have excellent and friendly service, and we don’t compromise on quality,’ he declares. ‘We make sure we buy the right products, good-quality products, and if that affects the bottom line, so be it.’

Controlling costs and maximising revenue – within the constraints of maintaining the high levels of quality and service that guests expect – have been the priorities. ‘We’ve managed to make some significant cost savings – of between 2% and 3% – by making better decisions,’ Nair says. ‘The volume of products that we buy helps.’

He has been forensic too about managing revenue, questioning the profitability of every decision. ‘I like to challenge everyone on how they are spending money, and how it’s helping the business,’ he explains. ‘I’m always asking them about the return on investment and how it’s helping the business – if you’re spending a pound on this, what will you get back?’

The challenge has been finding ways to encourage staff across a wide range of roles to focus on revenue, in an accessible way.   ‘I like to ask people to think small and only look at the bigger picture at the end of the month,’ he says. ‘So, for example, I often set them daily targets – I tell them that if you bring in this amount every day, you will be fine. It helps people to see the possible in every situation.’

It is a strategy that has worked well. When ‘a new concept’ was introduced for the bar at the ground-floor entrance to the hotel, the team responsible for running it came up with a range of promotions that helped them to meet their daily targets, resulting in a significant increase in revenue.

Nair joined Shangri-La in May 2017, another step up in a successful career in hospitality that has taken him from India to the US and Europe. He had a talent for maths and, it seems, for commerce from an early age. ‘My parents used to tell me to save my money and look to your future, so I always took care to save up my pocket money,’ he says. When his aunt and uncle needed to borrow some money from the family it was the young Nair who lent it to them – at, he adds, a competitive rate of interest.

After qualifying as an accountant in India in 1990, he took a post as senior accountant with Abjar Hotels, which owned the Sheraton, Ramada and Renaissance hotels in Dubai. ‘The opportunity came up and I took it, so I could say I found myself in the hospitality sector by accident,’ he says. He soon realised, though, he had stumbled across a business environment that was perfect for him. ‘I like to work with people, and the really good thing about hospitality is that you get experience and knowledge of a lot of business areas, such as sales and marketing, at the same time. I like to learn how the whole business works, to contribute and ask challenging questions. That job in Dubai made me want to pursue a career in hospitality.’

It was a decision that has since taken him all over the world. He moved to the Marriott International group in 1996, working in Dubai, the US, Mumbai and London, before heading to Hilton Hotels, where he was finance director of the group’s Gatwick and Brighton hotels.

Keen to keep his accounting knowledge up to date as he travelled, he qualified as a US CPA in Colorado in 2002 and with ACCA in 2006. ‘Finance skills are very transferable in the hospitality sector because hotels are the same everywhere in the world, but the approach to accounting is different in each country, so I wanted to learn more.’

While in previous roles he was responsible for multiple hotels simultaneously, looking after the Shangri-La feels like a much bigger job. ‘It’s very busy,’ he says. ‘I often find myself here at weekends.’

The hotel’s operating lease means that there are landlords and building owners to deal with (the Shard is 95%-owned by the state of Qatar), adding further to the complexity.

The hotel is keen to be part of the local Southwark community rather than just literally rise above it, and sources as much as it can from the famous Borough Market across the road, which is itself a big tourist attraction. ‘We want to support local vendors as much as possible and they keep their prices competitive for us, Nair explains. ‘We have a vested interest in the market and they have a vested interest in us.’

Next year will see the start of a capital expenditure plan to keep the hotel up to date. ‘That’s very important for us. We want to be one of the best and create a real presence in the London market. It’s an iconic building. People come here to propose, to get married, to celebrate birthdays and other events. They are occasions that they want to remember for the rest of their lives, so everything has to be right.’

"People come here to propose, to get married, to celebrate birthdays, so everything has to be right"