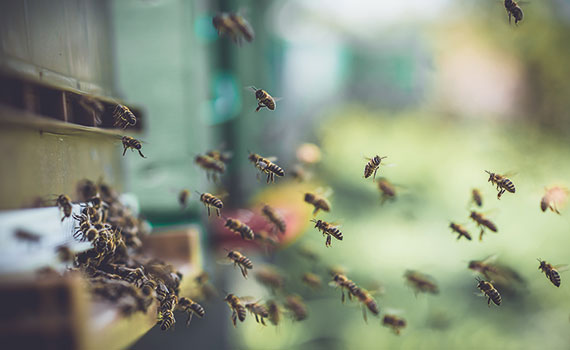 Tax has long been a policy tool of choice all around the world for influencing social and economic behaviour. But can it be used to help drive a sustainable global economy?

This is the challenge explored in a recent ACCA report by Femke Groothuis, co-founder of the Ex’tax project – a thinktank focused on fiscal innovations to boost the United Nations’ Sustainable Development Goals (SDGs). The report, Tax as a force for good: rebalancing our tax systems to support a global economy fit for the future, calls for a rebalancing of tax systems, and sets out how governments must think more widely about what they should be taxing, and how those tax revenues should be put to use.

The headlines may be dominated by whether multinational companies are paying their ‘fair share’ of corporate tax around the world, but Tax as a force for good focuses on other, less publicised taxes – in particular, labour and green taxes. It is these taxes that can directly impact the world’s social and economic challenges of unemployment and pollution.

The report stresses the urgent need to focus taxation on resource use and pollution rather than on labour. It describes adapting tax systems in this way as a ‘survival of the fittest’ challenge: it is not the biggest or strongest that will survive, but those that adapt in time to changing circumstances.

Groothuis notes how tax systems have evolved over recent centuries – the 18th-century window tax in England and Wales has been replaced by fossil fuel duties and progressive income tax in the modern world. But this evolution was firmly rooted in the industrial revolution, and as we enter the fourth industrial revolution – one driven by data and technology – so tax systems around the world need to adapt accordingly.

The starting point for this discussion centres on the UN’s 17 SDGs, described as humanity’s ‘to-do list’. Unemployment, underemployment and vulnerable forms of employment are highlighted as part of Goal 8 (decent work and economic growth), making the point that the global economy is nowhere near achieving full and productive employment.

Groothuis argues that this creates a barrier to inclusive growth. It has been calculated that just $0.64 of every dollar an employer pays in labour costs ends up in employees’ pockets (the so-called labour tax wedge). Research shows that high taxes on labour income can hamper job creation and work incentives. High payroll costs are an incentive for employers to minimise headcount, and affect employees’ decision to enter the labour force and the number of hours they work (the effect is particularly strong among low-income workers, single parents, second earners and older workers).

This matters, argues the report, because on average across the 36 member countries of the Organisation for Economic Co-operation and Development (OECD), more than half of all the tax revenue comes from labour. Other countries – the emerging economies of Africa, Asia and Latin America – rely more on sales taxes, but still raise significant amounts via labour. Green taxes hardly get a look in.

No alignment with sustainability

This disparity is at the heart of the report. Many of the world’s greatest social and economic challenges relate to disadvantageous environmental mega-trends – climate disruption, pollution and consumption patterns. The report cites the latest Intergovernmental Panel on Climate Change (IPCC) analysis, which warns that global carbon emissions must start to fall in the next 12 years if large-scale natural and human risks are not to play out irreversibly. Air pollution, mostly from vehicles and industry, kills millions every year, while a truck load of plastic waste is dumped in the oceans every minute.

The figures given in the report are staggering. The long-term negative impact on the global economy caused by carbon dioxide emissions in 2017 alone was US$16 trillion, while the global welfare losses from pollution stand at US$4.6 trillion a year, or 6.2% of global economic output.

Despite this, polluters do not pay. ‘Considering that we live in an era of climate change, water scarcity and geopolitical tensions over fuels and materials, it would be wise to use natural resources prudently,’ the report points out. ‘Our tax systems, however, are currently not aligned with the goal of sustainability, as the use of natural resources tends to be relatively tax-free, or even subsidised.’

It is not as if there aren’t options for green taxation. The policy toolkit developed by Ex’tax provides an overview of more than 100 ‘green’ tax base options that are available to governments, including ways to tax air pollution (such as carbon emissions), energy, food production inputs, fossil fuels, metals and minerals, traffic, waste and water. Each category is divided into subcategories. The waste category, for example, is broken down into electronic waste, packaging, nuclear waste, sewage, landfill and other types of waste. 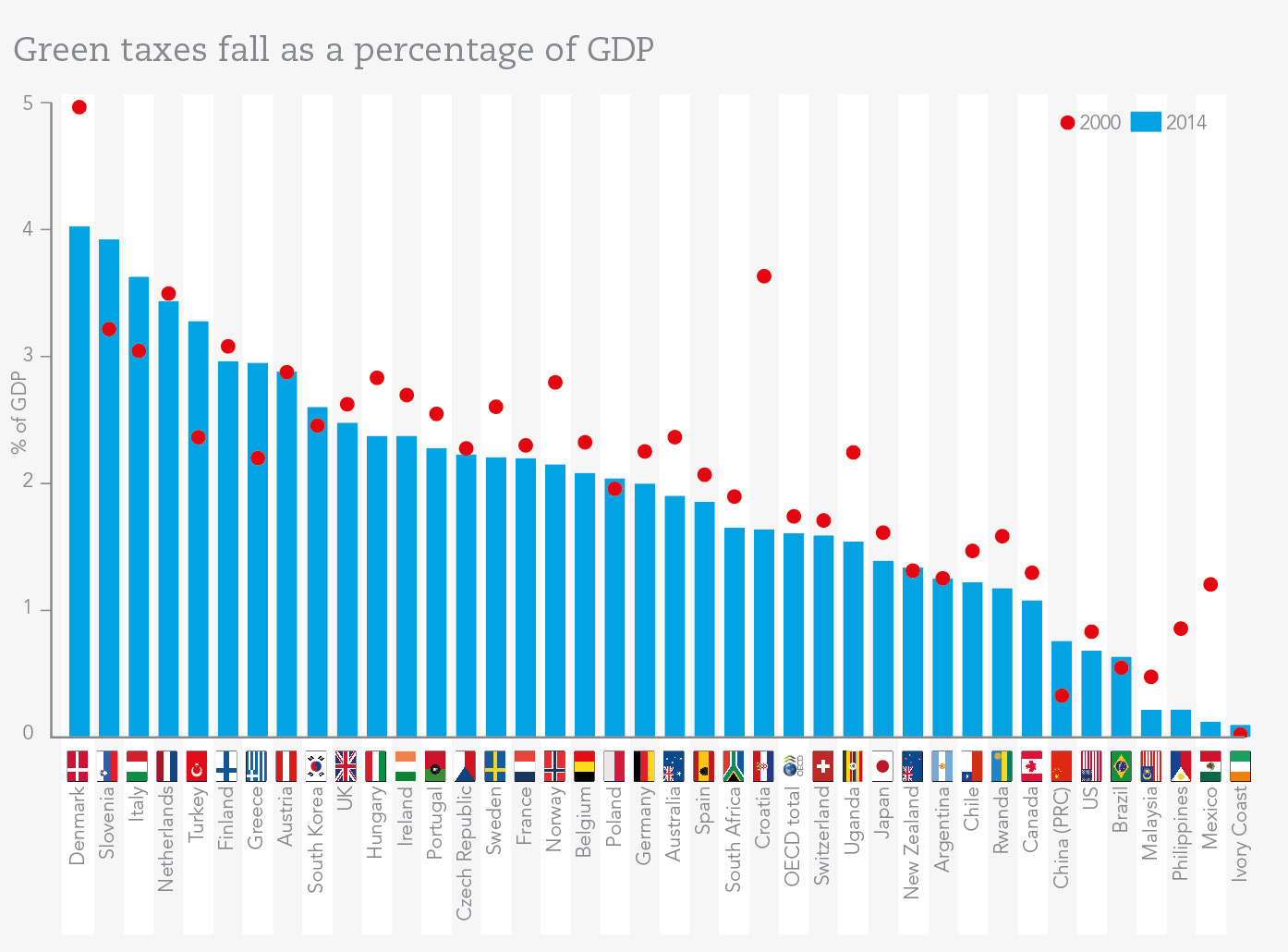 Green taxes can be highly effective at changing behaviour and averting environmental damage. The UK’s landfill tax, for example, has been instrumental in reducing the amount of waste dumped in the ground by 44% since 2000. And when the Stockholm, Sweden, began taxing vehicles to reduce the volume of traffic, air-borne pollutants dropped by up to 20%, decreasing the incidence of childhood asthma by 40%.

Crucially, the report argues that green taxes are growth-friendly – they distort the economy less than taxes on labour and income, and the administrative and transaction costs are lower than other taxes, notably income tax. Compared with emissions trading systems and direct regulation, green taxes provide more opportunity for recycling the revenues by reducing other taxes to compensate in part, or even to overcompensate, for any welfare loss that may occur.

But their use is limited. In 2014, green taxes raised 5.3% of total tax revenue in OECD countries (generating revenue equal to 1.6% of OECD GDP) – see the graph above. Having put the case for green taxes, Groothuis sets out the steps that can be taken to shift the tax base towards a green tax system – see box on opposite page. But she concedes that implementing such a strategy is not easy – short political lifecycles do not encourage long-term strategies, while industries with a vested interest in maintaining the status quo are often powerful lobbyists. International coordination would also be required, and followers of the OECD’s BEPS (tax base erosion and profit-shifting) project will be well aware of just how difficult it is to reach agreement in principle, let alone put any policies into practice.

In addition, an often heard worry is that environmental taxes can aggravate income inequality, as low-income households spend a higher share of their income on energy-intensive goods. In practice, though, plenty of policy options are available to alleviate the impact on specific households.

Business can play an important role in promoting the shift to a greener and more sustainable tax system. The report says: ‘The private sector can become a catalyst for better policy by engaging proactively with governments to push for forward-looking policies to promote circular and inclusive business growth.’

Circular business models require a shift away from the linear take-make-waste industrial model to a carbon-neutral and regenerative approach in which products are ‘made to be made again’. The report cites many ways in which businesses are leading through innovative models, but governments can do more to support circular business initiatives.

The report concludes: ‘By rethinking the design of our tax systems in a holistic way, taxes can become a tool supporting the ambitions of an inclusive global economy that is fit for the future.’ In other words, tax can be a force for good.

"Green taxes are growth-friendly – they distort the economy less than taxes on labour and income, and incur low administrative and transaction costs"

How to green the tax base

Femke Groothuis suggests the tax base can be shifted away from labour and income and towards a greener regime by:

Putting a price on pollution and natural resource use. Countries can start with the low-hanging fruit – options that suit national circumstances best. In light of the Paris Climate Agreement, the abolition of fossil fuel subsidies and the creation of effective carbon pricing are the likely first candidates.

Using revenues to lower the tax burden on labour and improve social protection. Careful design is required to ensure the needs of vulnerable groups are addressed through increased social protection or income support.

Monitoring and adjusting. In a fast-changing world, tax systems will need to adapt much faster than before.