With her passion for wellbeing a key part of her management strategy, Cindy Hook is relishing her latest role as CEO of Deloitte Asia Pacific 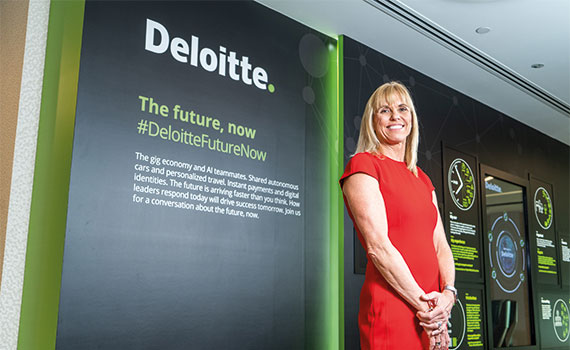 As a self-confessed Bruce Springsteen fan who has seen ‘The Boss’ in concert no fewer than 73 times, and someone who lists her alternative career ambition as rock star, Cindy Hook is certainly rocking it out on the accounting stage. In 2015, she became the first woman in Australia to lead a Big Four professional services firm, and most recently in September 2018 took on the role of CEO at Deloitte Asia Pacific.

Through all her breakthrough accomplishments, Hook says that she has never felt held back in her career. ‘I think one of the things that helped was being brought up in a family of all girls,’ she says. ‘My dad treated us all like anything’s possible and you can have whatever you want.’

This attitude, coupled with a love for tackling challenges head on, proved to be a winning combination, as Hook steadily rose through the ranks to reach the top of her profession.

Hook’s formula for success is, however, no special secret. ‘Anybody who rises to the top of the profession works hard,’ she says. She does, however, believe that a passion for what you do is also essential. ‘This means knowing what you love to do and what you’re good at, and finding an organisation where these things are valued and appreciated. I call that playing to your strengths.’

For Hook, even though she first got into the accounting profession because of an affinity for numbers and analytical subjects, it was really her love for businesses and people, and finding a like-minded organisation in Deloitte, that helped her to soar in her career.

She puts it this way: ‘I’m passionate about business, understanding businesses and what drives business performance. And I’m also passionate about people and helping individuals reach their potential, and that’s so much of what Deloitte is about.’

Beyond hard work and passion, Hook acknowledges that she’s also benefited from her interactions with role models, both within the office as well as at her clients. ‘I’ve had many good mentors along the way,’ she says. ‘But the people who really made a difference to me were those who sponsored me and decided to give me exposure, opportunity and connections.

‘Chaly Mah, the retired CEO of Deloitte Southeast Asia, was one such person,’ she says. ‘He helped me to navigate Asia. The relationships that he helped me build within this firm and the perspectives he gave me were instrumental in my being ready to take on this role.’

Appreciative of the support she’s received, Hook is now excited about paying it forward and bringing up the next generation of leaders. In a recent example, as she was putting together her executive team for Asia, she realised that not many women were being shortlisted.

‘As I started bringing up names, people would say ‘she’s not ready’ or ‘she doesn’t have the right experience’. In the end, I decided to interview them and I ended up picking three amazing women. As it turns out, they’re doing great, they’re growing immeasurably and they were ready for the roles.’

In fact, so deep is her passion for nurturing talent that today Hook defines her career successes not by personal accomplishments but by seeing the people in her charge succeed.

‘It’s really about the legacy that you leave behind,’ she says. ‘One of the proudest moments I had recently was when I stepped out of the CEO role in Australia. The board had to pick a successor and the firm had a strong line of succession candidates. I am really happy to see that the team is continuing to thrive.’

As a go-getter and someone who was comfortable working in a male dominated workplace, it wasn’t always apparent to Hook that not all women in the workplace were like her. ‘I’m pretty aggressive, pretty outspoken, not timid, but not everyone’s that way,’ she concedes. ‘I realised somewhere along the way that some women may not be as comfortable in these environments.’

Her opportunity to be a champion for gender equality then presented itself when she was appointed CEO in Australia. ‘People started asking me to do interviews because I was the first female CEO of a Big Four firm in Australia,’ she says, admitting that initially she was apprehensive about taking on gender questions, preferring instead to focus on how she would make a great executive. Then it struck her that she could do a lot more to advocate gender diversity and inclusiveness in the workplace.

‘In my job, I am in a position to help people overcome their mental barrier, whether they are a man or a woman, or even if it’s due to their cultural background,’ she says. ‘In some ways, I think men actually have less choice than women, and the reason why I say that is that the choice for a man to be a caregiver comes with a stigma in many places.’

Hence, today, Hook is on a mission to improve gender parity in the workplace. She says that even though much progress has been made over the past three decades, there’s still much to be done. ‘At Deloitte, women in leadership roles have increased around threefold, but women still only make up about 20% of our partners globally,’ she says.

One of Hook’s personal passions is wellbeing. A former marathon runner, she continues to keep fit by hiking, doing pilates and yoga, water skiing and mountain biking.

Ever since her time as CEO of Deloitte in Australia, however, she has started to integrate her passion for wellbeing into part of her management strategy. ‘I realised that the times when I tended to be my best at work were when I felt physically, mentally, emotionally and spiritually strong.’

This led her to think that if she could create an environment where everybody felt well individually, they would perform better, and together that would drive the higher performance of the firm. Subsequently, Hook started pushing for various wellbeing initiatives to be implemented at the office. One such initiative, a six-week step challenge, was initially envisaged for a few hundred people but ended up involving over half of the 7,000 strong Australian practice. As Hook recalls: ‘The competitive spirit started going and the step challenge became a wild success.’

It is no surprise that Hook has a fiercely competitive side to her. Attributing this to playing sports while growing up, she reveals: ‘I thrive on challenges. In fact, I get bored when I don’t have a challenge.’

The biggest challenge facing Hook right now is turning Deloitte into the most integrated professional services firm in Asia. ‘One of the biggest trends in the world is rapid globalisation,’ Hook says. ‘Clients want you to provide them with the breadth of capability and the highest quality and consistency no matter where in the world they are. Integration in Asia is about breaking down barriers to ensure we do that for our clients.’

But with a diverse region like Asia, with its varying stages of market maturity as well as cultural differences,how will Hook enable integration?

Her strategy is two-fold. First, she believes that it is necessary to attract and retain human resources on the ground who understand the local market, while at the same time bringing skills and capabilities from other markets more seamlessly to the client. For this, Deloitte needs to embrace technology.

‘Clients are demanding more efficient, more cost-effective and higher quality audits,’ Hook says. ‘But to maintain that in an increasingly digitally enabled world, you’ve got to innovate. You’ve got to use technology – artificial intelligence and robotics, and everything at your disposal.’

Secondly, she believes that instead of trying to overcome differences, Deloitte in Asia Pacific should embrace its diversity. To represent her campaign, she has come up with the slogan: ‘United + Unique’.

With her three decades of experience in audit and accounting, Hook has witnessed major changes within the profession. On the one hand, big accountancy firms have evolved from primarily offering accounting, audit and tax services to becoming much more broad-based and multi-disciplinary in their approach to enabling businesses.

On the other hand, however, Hook gladly notes that the foundation on which the accounting and auditing profession has been built for over a hundred years continue to remain true. ‘Audit is about making investors feel safe and informed in terms of what they’re investing in and protecting the capital markets,’ she says. ‘In that respect, it has not changed at all.’

Even as auditors continue to serve this vital function in society, Hook believes that the skills that are ingrained in them also give them an advantage far and beyond the realm of accounting.

For one, Hook says that auditors are great at providing assurance and possess a certain level of scepticism, pragmatism and realism that has been finely honed through training on the job. On a personal level, this has given her the confidence to take risks along the way. ‘I think in order to really make the most of your career opportunities, you’re going to have to take some calculated risks.’

More than that, Hook believes that chartered accountants have a great foundation, because they understand how businesses operate and what drives business success.

‘I think some people look at accountants and just think you’re a technician but I would say auditors are much broader than that,’ she says. ‘Good accountants also have great people skills, the ability to read and understand cultures and are able to get along well with people.’

Looking back at the path she’s taken, Hook has no regrets: ‘Being a certified public accountant is one of the things that I’m most proud of, and it’s certainly served me well over the past 30 years.’

"The people who really made a difference to me were those who decided to give me exposure, opportunity and connections"

On 1 September 2018, Deloitte Asia Pacific was formed with the coming together of Deloitte practices in Australia, China, Japan, New Zealand and South-East Asia. This move allows for greater investment and focus on Deloitte clients in the region.

Together, the five geographies are expected to generate a combined investment of US$321m over the next three years. The investment will enhance Deloitte’s ability to serve global, national and private market clients by enhancing service capabilities and increasing talent resources. Deloitte Asia Pacific, with the five geographies combined, has almost 44,500 professionals, with the potential to create a US$10bn business by 2022.