More protection must be given to whistleblowers

Whistleblowers are critical in uncovering corporate financial wrongdoings, and EU member states must now offer greater protection for those who speak out 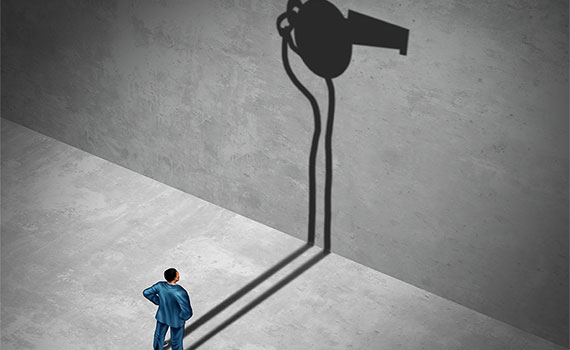 This article was first published in the June 2019 Ireland edition of Accounting and Business magazine.

Ireland’s whistleblowing regime is set to be strengthened to comply with a new EU whistleblowing directive that was approved in April by the European Parliament. Reforms must be in place by 2021 and will build on Ireland’s Protected Disclosures Act 2014, which itself marked a step forward legally for Irish whistleblowing, according to Kate Kenny, professor of business and society at the National University of Ireland, Galway (NUI).

Despite the substantial contribution to society of whistleblowers, they are more often punished or ignored rather than considered heroes.

Kenny points to her findings from interviews with people who had all reported unethical and illegal conduct at major corporations ahead of the 2008 financial crisis, only to see their own behaviour called into question rather than that of the institution. One example is the allegations of bullying faced by former Irish Nationwide Building Society executive Olivia Greene after she highlighted irregular practices at the now defunct lender.

‘Genuine whistleblowers are often poorly served and supported by society. I wanted to explore why this is so. Through hearing from those who have spoken out, I hope we might begin to reframe accepted attitudes towards whistleblowers,’ Kenny says.

The 2014 Act was a response to such concerns, and protects employees in the public sector and state-owned or directed companies who report authentic concerns about misconduct and malpractice from being dismissed or denied promotion. Whistleblowing employees who can prove unfair dismissal can be awarded compensation of up to five years’ pay, rather than the usual maximum of two years.

The EU directive, which offers more protection than Irish law, was also sparked by past failures to protect and/or listen to whistleblowers. A key inspiration was the case of Antoine Deltour, a former PwC auditor who disclosed to French documentary makers the tax arrangements of corporations in Luxembourg that allowed them avoid tax on earnings in other states. He and fellow auditor Raphaël Halet were both given jail sentences following their revelations.

According to Kenny, whistleblowers expose more cases of serious economic crime than all other detection measures – corporate security, internal audits and law enforcement – combined, while the European Commission calculated that up to €10bn annually could be saved in public procurement costs across the EU through a protection regime that encourages whistleblowers.

In the US, whistleblowers are also central to the Sarbanes-Oxley Act (Corporate and Criminal Fraud Accountability Act) 2002, which has a disclosure requirement, and the Dodd-Frank Wall Street Reform and Consumer Protection Act 2010. The Securities and Exchange Commission has awarded approximately $376m to 61 individuals since issuing its first award in 2012, describing whistleblowers as ‘the source of “smoking gun” evidence and indispensable assistance’.

Another important difference is that the EU directive puts the burden of proof on employers in cases where employees sue for what they claim was retaliation in the event of whistleblowing. In contrast, the burden of proof is on the employee in Irish legislation. While Irish law currently allows for up to five years’ remuneration for an employee dismissed for making a protected disclosure, the directive leaves the level of compensation in the hands of member states – although it says damages suffered by whistleblowers should be ‘compensated in full in accordance with national law’.

Kenny says regulatory bodies in Ireland lack the necessary powers, pointing to ‘the relatively small sanctions for transgressions highlighted by whistleblowers’. Such fines that have been handed down are ‘insignificant’ compared to the annual incomes of the financial executive or institution sanctioned, she adds, and there need to be more positive stories of disclosures being acted on to encourage whistleblowing. For example, Luxembourg’s courts have reduced the sentences originally imposed on Deltour and Halet in moves widely held to usher in a new approach to corporate revelations.

The EU directive requirements differ from Ireland’s regulations in the following ways:

Private entities with more than 50 employees or an annual turnover of more than €10m (and financial services firms of any headcount) must establish ‘confidential whistleblower channels’ and clear reporting processes.

Protection is extended to trainees, volunteers, self-employed and employees.

Member states will have to decide their own sanctions and enforcement mechanisms, but whistleblowers (and their supporters or family members) will benefit from special legal protection against all forms of retaliation, such as dismissal, ‘degradation or intimidation’.

Whistleblowers are entitled to access legal, financial, and psychological support.

Protection is extended to whistleblowers who approach the public and the media if no appropriate action has been taken after their initial report to the company or the authorities and the public interest is at stake.