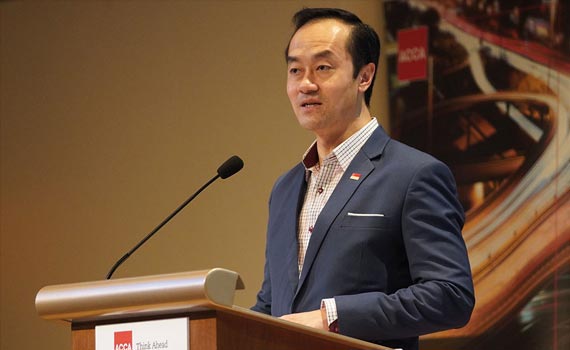 This article was first published in the June 2019 Singapore edition of Accounting and Business magazine.

Held at the NTUC Centre in Singapore, the event focused on exploring the roles and collaborative opportunities of the financial, legal, accounting and other professional services sectors in the development of Singapore and London as economic hubs, as well as regional gateways into the ASEAN region and Europe.

In his welcome speech, Stephen Shields, ACCA’s market director, partnerships and recognition, said that, as a global accountancy body, ACCA has always kept an eye on the future with the aim to develop capacity in the profession and encourage the adoption of consistent global standards.

‘The Global Connect event provides a great platform to share best practice around business models and partnerships, allowing banking and finance professionals, accountants and lawyers from both Singapore and the UK to network, share ideas and perhaps even germinate the next big joint crossborder project,’ he said.

Guests of honour at the event were Dr Koh Poh Koon, senior minister of state for trade and industry, and Natalie Black, HM trade commissioner for Asia Pacific, Department for International Trade, UK.

In his keynote address, Koh noted that with ASEAN’s GDP expected to grow 5% annually, and the region becoming the fourth largest global economy by 2030, there was a growing demand for professional services.

‘To seize these growth opportunities, ASEAN companies and foreign multinational corporations are steadily expanding their operations here and will in turn require more legal, accounting, marketing and financial advisory services. This presents significant growth opportunities for UK firms in the financial and professional services sectors that are looking to expand beyond Europe,’ said Koh.

To successfully penetrate the ASEAN market, however, Shields felt that it was crucial to leverage hubs such as Singapore to generate and capture international connections. He said: ‘[Hubs] are instrumental in developing a country and its surrounding region. Momentum builds as hub-based firms are incentivised to adopt new technologies and business models, making them pace-setters for the regions.’

Specific to Singapore, Shields identified the nation’s status and reputation as a hub in areas such as finance, transport, infrastructure, intellectual property and professional services, among others.

Similarly, he added that London benefited from a growing, mutually sustaining, concentration of financial and professional services. ‘The co-location of expertise and capacity stimulates greater efficiencies, accelerates productivity and fuels more rapid innovation.’ This ‘cluster effect’ makes London an ideal starting point for countries looking to invest in Europe. The UK is the world’s leading net exporter of financial services.

Black highlighted in her keynote speech Singapore’s already significant investment in the UK, which was represented by more than 40 Singaporean financial firms employing nearly 1,000 people. However, she said there was still scope for further collaboration ‘particularly in technology and innovation’.

‘The UK is the top destination for technology investment in Europe, with the sector growing at 2.6 times faster than the rest of the economy. With everything else going on, it is easy to forget the UK has more venture capital funding, produced more unicorns and IPOs, and has more skilled tech workers than any other country in Europe,’ said Black.

A keenly discussed topic at the event was that of the changing face of globalisation. Guest speaker, James Crabtree, associate professor in practice, Lee Kuan Yew School of Public Policy, said in his keynote address that while globalisation of the past was defined by physical trade, global value chains, labour cost arbitrage and blue collar outsourcing, future globalisation would be characterised more by services trade, regional value chains, locating hubs closer to customers and innovation, and white collar outsourcing.

In his presentation on the ‘Growth of economic hubs’. Anthony Walters, head of public affairs, ACCA Global, shared that by 2050 an estimated two-thirds of the world’s population was expected to live in cities, and that there would be an exponential rise in the number of mega-cities (10 million-plus inhabitants).

He added: ‘We are in the process of launching a high-level forum to discuss the role of global economic hubs, including Singapore, in developing professional accounting, legal and financial services. We’ll be bringing together thought leaders, professionals, our own members and government organisations to consider how to deal with some of the core challenges, as well as deliver on the opportunities.’

Another key topic of discussion was the rise of small and medium enterprises (SMEs). Crabtree said: ‘It used to be that only large companies [could] take advantage of globalisation. But what’s interesting about this coming era is that smaller companies are also going to be able to take advantage of many of the global opportunities. This is particularly true because of the advent of digital platforms. Crossborder e-commerce is growing substantially, largely because of platforms like Tmall and Taobao in China.’

He added that even for professional services such as accounting and legal, SMEs were now able to enjoy the same kind of advantages to source global talent and trade globally that were previously restricted only to big companies.

During the event, ACCA announced the launch of the AccXelerator programme, which is aimed at enabling small and medium practices to capture new opportunities in new markets and adopt scalable technology to grow rapidly and innovatively (see box).

Reuter Chua, head of ACCA Singapore, said: ‘There is no better time than now for companies in the professional services sectors to establish solid partnerships in a globalised world. With the rise of online marketplaces and crossborder e-commerce, the expectation is for SMPs to be equipped with the relevant knowledge, skills and abilities to help them to stay ahead of the game.’

The ACCA AccXelerator programme helps small and medium practices to accelerate their growth and transformation, develop new and innovative capabilities to adapt to emerging challenges, and to exploit new opportunities. It is a collaborative effort between ACCA, the Singapore National Trades Union Congress and AI Singapore.

Each run will be adjusted to suit the needs of every cohort. The first cohort will be limited to 10 participants. The cost of the six-month AccXelerator programme (11 CPD hours) is S$388 per person (non-refundable).