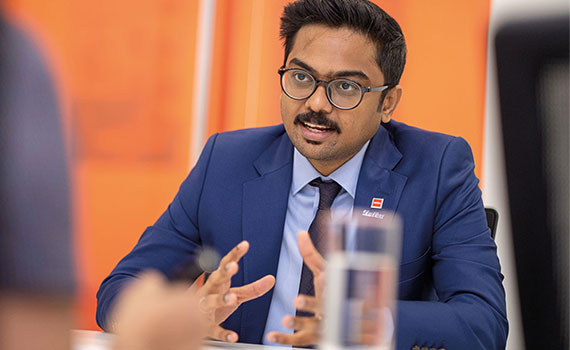 This article was first published in the September 2019 Malaysia edition of Accounting and Business magazine.

Thenesh Kannaa has had a busy decade. He co-founded TraTax, an independent tax advisory firm that sits among the top 10 in the country for indirect tax and transactional tax. His diverse clientele base includes SMEs, multinational corporations (MNCs), public listed companies and the government. He’s co-authored a number of books on taxation and is also a member of various committees providing input to the government.

That he’s achieved all this while still in his 30s is certainly remarkable but for Thenesh – modest and practical to a fault – these accomplishments are the result of diligence driven by ambition, the firm’s value proposition and, above all, the importance placed on seeking clarity.

It was the latter point that first led Thenesh to focus on tax, despite not having a penchant for it when he was undertaking the ACCA Qualifications. ‘I thought that tax was full of grey areas and it was best to keep away from it,’ he recalls. ‘My thinking was that things were either black or white. As a student you tend to think that there is a binary answer to everything, so it was an eye-opening experience to learn that in this world there is black, white and grey, and you just have to accept and deal with that. In that process of realisation I felt that, given the many grey areas, there was an opportunity to turn some of them into black or white,’ he says.

After gaining his ACCA Qualification, Thenesh had a stint in audit at a small firm before moving on to tax work at a legal practice, followed by some business advisory experience. It was then that he saw an opportunity and, together with his elder brother Renganathan Kannan, established the tax advisory firm Thenesh, Renga & Associates – otherwise known as TraTax. ‘If you see a road that is less taken and a market that is underserved then you capitalise on that,’ says Thenesh.

He believes that running the firm with his sibling is no different from working with anyone else, as it is open to accepting new partners who bring different strengths to the table. ‘I am a technical person – a “yes-means-yes” and “no-means-no” kind of person – whereas Renga is excellent at people skills.’ he says, adding that the firm is run as a formal organisation with performance management systems and key performance indicators in place.

That the firm’s services have received such an encouraging response from the market has taken Thenesh by surprise. ‘Our key objective was to close the market gap because we saw that the upper band of SMEs did not have easy access to these services,’ he explains. But to our surprise we had a lot of MNCs and listed companies appointing us as well.’

Although there were no major challenges at the start, he concedes that a lack of Big Four experience was perceived by some as a disadvantage. ‘But in hindsight it was a great advantage because you tend to think outside the box when you don’t know what the box is to begin with,’ he says. ‘So while many firms offer a service on a particular pattern, we tend to think from scratch. We think of innovative solutions for clients, and that’s been a key success factor for us.’

What sets TraTax apart from other firms is, Thenesh believes, its focus on partner-led services. ‘A typical tax practice has a tall structure where a lot of things go through the managerial level with the oversight by the partner. Partner-led services, on the other hand, are driven by the partner and are supported by the staff. It’s a different paradigm altogether,’ he says, adding that this means the focus is on the value of the jobs rather than the volume.

He describes TraTax as an outcome-centric firm. ‘For every job that we accept, delivering the best outcome is the most important thing,’ he says. And clients, he adds, understand the firm’s values and approach.
‘You can’t, for example, tell the doctor how to do surgery just because you pay him. Here, we are the tax agent. We are both the client’s agent to the government and the government’s agent to the client, so when you play this dual role you need to tell people when they are wrong. It is challenging but as long as you focus on the outcome then you know that eventually they will be satisfied.’

Thenesh also notes that delivering one job with excellence makes no difference. ‘We ensure that every job gets the attention that it deserves,’ he says. ‘Delivering the best outcome is part of our routine now, so we do it continuously.’

He clarifies that the best outcome need not be that the client ends up paying the least amount of tax. ‘We would like to see everyone paying the right amount of tax – not a cent more, not a cent less,’ he says. ‘Frankly, many MNC boards are paranoid if too little tax is being paid. In today’s environment, international structuring works do not aim at the least tax but the right tax.’

Besides his work at TraTax, Thenesh also serves a member of ACCA Malaysia’s ExpertLink panel, which comprises a select group of industry experts to advise ACCA on its thinking on current and future trends affecting the profession and business in Malaysia. One growing area of concern is the convergence between indirect and direct tax.

‘I think this is the way forward because globally there is increasing reliance on indirect tax revenue for the government and increasing need for integration between indirect tax and direct tax matters, particularly in the context of digital economy and crossborder transactions,’ he says.

Thenesh has also co-authored books on tax matters as well as presented on many topics in hundreds of forums, conferences and seminars organised by various professional bodies, all of which, he says, form part of his search for clarity. ‘Turning grey into black or white is not like pressing a switch; it takes time, and more often than not the goal is to prompt a conversation because it’s only when you realise that there is a problem that you can do something about it,’ he says. ‘That journey towards clarity is an ongoing thing.’

So what’s next for this high achiever? ‘I have always been, and will continue to be, a problem-solver,’ he says. ‘For us, the next item on the agenda is getting the right senior staff and partners to be part of TraTax. We’re looking for people with strong interpersonal skills, knowledge and, most importantly, a passion towards taxation and problem solving.’

Thenesh Kannaa is a partner at Thenesh, Renga & Associates (TraTax). He is also a member of the Malaysian Institute of Accountants and the International Fiscal Association, and sits on ACCA’s ExpertLink panel. His professional career includes prior appointments in a legal firm, accounting firms and academia. He has co-authored books on tax and is the author of the Malaysian chapter of the Holding Companies Database, published by the International Bureau of Fiscal Documentation in the Netherlands.

Thenesh is also a member of various committees that provide input to the government on tax matters including the Chartered Tax Institute of Malaysia’s technical committees on direct taxation, transfer pricing and indirect taxation. His articles on contemporary taxation issues and related matters have appeared in various magazines and newspapers, and he’s also appeared on radio and television.

TraTax is a firm of chartered accountants registered under the Malaysian Institute of Accountants with the legal name of Thenesh, Renga & Associates. It is a non-audit firm specialising in tax advisory. In 2018 the firm was rated in the Top 10 in Malaysia for transactional taxation by the International Tax Review, and sits in World Tax’s top 10 for the country for indirect tax.