Financial success at the rugby world cup in Japan 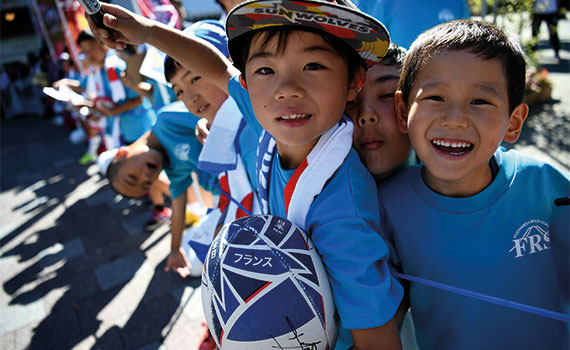 The Rugby World Cup in Japan is on track to break the revenue record set by the 2015 tournament in England, according to the sport’s governing body. Concerns over the unfavourable time zone and whether that would undermine media sales in the lucrative French and UK television markets have evaporated. Pre-tournament worries about the commercial programme and the perceived weakness of the host team limiting domestic interest also soon subsided.

Instead, the tournament’s impact on the region could be a ‘game-changer’, according to governing body and tournament organiser World Rugby. Japan’s bid beat those of Italy and South Africa – two countries with an established rugby infrastructure – to become the first host outside of the traditional rugby-playing nations.

One major factor in the decision to hold the tournament in Japan was the aim to encourage more participation in the game across Asia. A programme linked to Japan’s bid, called ‘Impact beyond’, confirms it has already hit an ambitious target of reaching 1.8 million new participants in the game across the region. More than one million participants interacted with the programme in Japan itself, while emerging rugby nations such as Pakistan (237,000), China (180,000) and India (106,000) made impressive contributions. Both sexes of all ages were also introduced to the game in Bangladesh, Indonesia, Laos, Malaysia, Nepal, the Philippines, Sri Lanka and Vietnam.

‘The Rugby World Cup council awarded the Rugby World Cup to Japan because we believed that it could be a powerful game-changer for sporting and social change in Asia, the world’s most populous and youthful continent,’ says World Rugby chairman Bill Beaumont. ‘I believe we can look forward to a very exciting and prosperous future for the game in this region.’

Japan Rugby 2019 is expected to deliver record revenues for a world cup tournament. An EY study, The Economic Impact of Rugby World Cup 2019, estimates that the total output to the Japanese economy will be US$4bn. The tournament is predicted to increase GDP by US$2bn and boost tax revenues by US$200m. Travel and accommodation could generate US$987m to the economy in direct expenditure. More than US$373m has already been invested in infrastructure projects, while the tournament has employed 25,000 people.

Japan Rugby 2019 is also hoping for long-term benefits. ‘Rugby World Cup 2019 represents an unprecedented economic opportunity for the whole of Japan, with a wide range of opportunities across many sectors,’ says organising committee CEO Akira Shimazu. ‘Through investment in infrastructure, supporting jobs or generating tourism revenue opportunities, this is a tournament that is on track to deliver a significant economic legacy for our nation.’ By comparison, Rugby World Cup 2015 in England produced an overall economic impact close to £2.3bn (US$2.83bn).

The quadrennial tournament is the commercial and financial vehicle that drives World Rugby’s investment in the global game, supplying more than 90% of World Rugby’s revenues from broadcast, sponsorship and other commercial income. World Rugby invested £482m (US$593m) between 2016 and 2019 at all levels of the game, following the 2015 tournament. This represents a 38% increase on the previous four-year financial cycle.
The governing body defers all revenues and direct expenditures related to Rugby World Cup until the year of the tournament – as such, all revenues relating to the tournament will be reported in its next set of accounts.

With the Japanese tournament being hosted across 12 cities, the economic benefits have been shared around the country. However, Singapore and Hong Kong – part of the original Japan bid – were not chosen among the final 12 tournament locations. Japan’s initial bid allocated some pool matches there in what it called a ‘tender for Asia’ to help globalise the sport, but the International Rugby Board (IRB), insisted matches must be staged within the host nation.

Preparations for the tournament were relatively smooth, with one major exception. Japan’s stadia development plans were surprisingly altered in 2015, after prime minister Shinzo Abe shocked World Rugby by scrapping plans for the national stadium in Tokyo, ending the host nation’s ability to stage matches at the stadium. Abe said the US$2bn cost of the stadium was too high and requested a new design. As a result, the stadium will now be ready in time to host the Olympic Games in Japan next year.

While World Rugby admits that the loss of the venue has had a ‘significant impact on the overall ticketing capacity and tournament budget’, the overall commercial success of the tournament has come as a surprise to the organisers. Land Rover and Société Générale are among the tournament’s sponsors and are believed to have paid 25% increases on 2015 prices to renew their Worldwide Partners rights.

World Rugby’s chief commercial officer Tom Hill confirms: ‘Commercial revenues are up. Broadcast revenues are up. Ticket sales are better than 2015. Sponsorship revenues are up. We were thinking potentially it wouldn’t be as attractive for sponsors as 2015, given the time zone, but it’s been more positive in terms of growth than we’d ever anticipated.’

400,000 visitors are expected to have travelled to the tournament.

31 matches were shown in Japan on free-to-air television channels.

20 teams took part in the tournament.