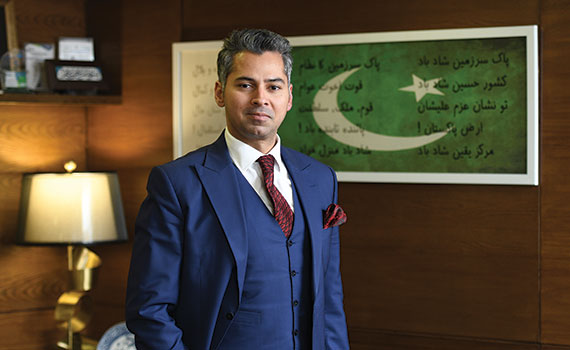 At the headquarters of U Microfinance Bank in Pakistan’s capital Islamabad, CEO Kabeer Naqvi FCCA recalls with obvious pleasure the day when loan customer Musarrat Khurseed told him how U Bank had helped transform her family’s life.

With the help of a U Microfinance Bank loan she was able to quit her retail job and open her own boutique, providing employment for 15 women from her region and increasing her income from just PKR200 (US$1.25) a day to PKR13,000 (US$82) a day. ‘Her comments made my day,’ Naqvi admits. ‘Our loans really have empowered Pakistani women, enabling many to create their own businesses and achieve financial independence.’

Naqvi’s enthusiasm for his work is palpable. He moved into the top job at U Microfinance Bank in 2018 and is optimistic about the impact microcredit can have in a country like Pakistan, where according to World Bank data just 7% of women and 20% of men have their own bank accounts, and the annual gross national income per capita in 2018 was just US$1,590.

As one of Pakistan’s fastest growing and digitising businesses, U Bank (as it is known) is in a position to pull thousands of Pakistanis out of poverty and assist them to grow their income in a sustainable way.

Naqvi has been a pioneer of microfinance in Pakistan. Armed with his ACCA Qualification, experience in commercial internal audit and a spell with EY Middle East as a tax consultant, in 2006 he returned to Pakistan to join new startup Tameer Microfinance Bank (now Telenor Microfinance Bank). ‘My past experience as CFO of Tameer and my ACCA membership were the key success factors that brought me to U Bank’, he says. ‘I understood the back end so well, which is precisely what was needed here.’

When he moved to U Bank in 2015, the bank was struggling, with a shortage of capital and mounting losses. Within two years, though, the value of the bank’s loan portoflio rose from PKR600m to PKR9.3bn (US$56.6m) and deposits from PKR1bn to PKR13bn (US$79.2m).

The bank’s parent company, Pakistan Telecommunication Company (PTCL), itself owned by UAE-based major telco player Etisalat, was sufficiently confident in the resulting turnaround that in January 2018 it injected PKR1bn (US$6.1m) of capital into the business, and later the same year agreed to offer it a PKR4bn (US$24.4m) unsecured subordinated debt facility. ’This showed confidence in our performance,’ says Naqvi. ‘We’ve been very fortunate that our shareholder has our back.’

Today, the bank is making robust profits. In 2019 the total loan portfolio amounted to PKR22bn (US$134m), and deposits were worth PKR23bn (US$140.1m), which Naqvi says is unprecedented. ‘No microfinance bank has grown this much in Pakistan. With 201 branches, we are now the largest microfinance bank in terms of total number of branches – and we were one of the smallest four years back.’

The bank has developed an extensive network across 160 cities and rural areas in Pakistan. Naqvi and U Bank’s management team have themselves travelled thousands of miles to personally inaugurate each and every branch, ensuring that the decision-makers remain constantly in touch with bank staff, customers and on-ground realities. The bank also has a growing network of 45,000 agent locations alongside its own branchless banking solution, UPaisa, a joint venture with Ufone, which is also a PTCL subsidiary.

‘Our expanding geographic footprint is a testament to our commitment to the economic enablement of the unbanked population of Pakistan,’ Naqvi says.

The extensive geographical spread of U Bank’s network helps with outreach to rural areas, which is of critical importance, given that agriculture constitutes 24% of Pakistan’s GDP and employs 42.3% of its workforce. It lends primarily to livestock (meat and dairy) farmers, as well as arable farmers, focusing on borrowers whose income is below PKR40,000 (US$250) a month and farmers owning less than four acres of land. ‘These are people who are financially excluded, and commercial banks do not cater to them,’ says Naqvi.

He recalls another satisfied borrower, an independent seamstress who used loans from U Bank to purchase additional sewing machines, which ultimately led to her establishing a successful clothing business. A typical initial loan might amount to PKR 50,000 (US$315), but successful borrowers return for larger loans, up to PKR 100,000 or PKR 200,000, as their business gradually expands.

‘It’s a circle, but they keep on graduating to a higher level of income and their businesses keep on expanding,’ Naqvi says with pride.

‘That was always the inspiration – to get the unbanked into the banking net and to serve them,’ he explains. ‘The end goal is socio-economic uplift.’ He adds that loans bring people into the formal economy where they pay taxes: ‘This is essential if you are to see real change in Pakistan economically – microfinance is at the forefront.’

As a financial institution owned by a listed company and dealing with many small clients, robust accounting is of critical importance to the bank’s success. Professionally trained accountants play a key role, not just in the finance department and for statutory outside audits, but also in departments for risk, credit, compliance and internal audit.

Naqvi has a message for other financial institutions in Pakistan – hire young talent. ‘Have trust in youth like I did. Invest in them. Believe me, they will give outstanding performance,’ he says. ‘At U Microfinance Bank, the average age of bank employees is 27 years, while that of the management team is 38. So, believe in youth: it will deliver.’

His message to young financial professionals is to keep faith and work for employers who support younger employees. Everybody wins.

Looking ahead, Naqvi says a key goal for 2020 is digital transformation, with the bank digitising both its internal processes and loan applications. ‘The bank is shifting towards acquiring loan applications on a tablet with the data coming in electronically and the loan disbursed into a mobile wallet, as opposed to a regular bank account,’ he explains. ‘We’re going to be graduating from a manual-run microfinance bank towards a digitally run bank in the future.’

According to Naqvi, digitisation could accelerate the bank’s recent growth even further. ‘Imagine the scale we can achieve if we use scorecards, mobile phones and digital channels to increase our business,’ he says.

Building on its current performance, U Bank looks set to seize a big slice of this growing market, with the aim of financial inclusion, sustainable development and poverty alleviation.

"Our loans really have empowered Pakistani women, enabling many to create their own businesses and achieve financial independence"

2018
President and CEO, U Microfinance Bank