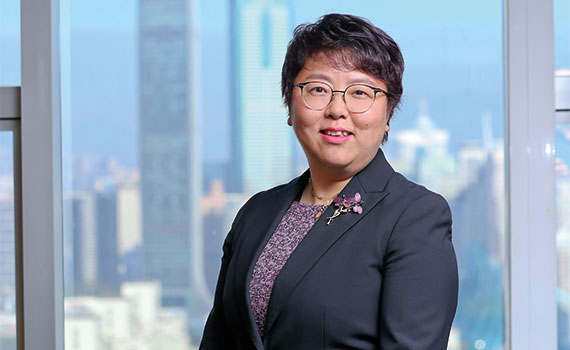 There are two numbers that CEOs always have to pay attention to, says Phoebe Yu. One is the sales price of a product or service and the other is the cost of production. Those are the first two numbers that shareholders and investors look at. And, in recent months, those are numbers that are taking up much of her attention.

Yu is CFO at Shenzhen Energy Group, a large Chinese state-owned energy producer listed on Shenzhen Stock Exchange. The company operates mainly in power generation and the supply of urban gas. It has fossil-fuel power stations, wind power farms, solar power stations and waste incineration power generation plants in more than 20 provinces across China. At the end of 2017, it reported revenue of RMB15.4bn. It is a large operation in a key industry that is undergoing significant change. And Yu is at the heart of it all.

The last few months have been tricky, with structural changes in China directly impacting the operations of the company and playing right into the variables that affect both sales prices and costs. And there is no shortage of those variables, which include everything from global economic slowdowns or upticks to the performance of domestic currencies and the volatility of the stock market. Often, these variables are completely unrelated to the business performance of the company.

Yu notes that nearly 3,000 coal companies have been shut down in China over the past five years due to supply-side structural reform in the mining sector. Meanwhile, the number of large coal producers dropped to 5,067 by the end of 2017 from 7,869 in 2012. Another 1,000 coal mines will be closed this year in 12 regions, including coal powerhouses Shanxi province and Inner Mongolia Autonomous Region. The result, Yu points out, is likely to be higher prices.

‘We also need to import coal from overseas, as currently domestic coal production cannot meet our demand,’ she adds. ‘It increases our costs as well.’

China’s central government in Beijing is now pushing for more power for both residential and industrial uses to be generated from natural gas rather than coal, particularly over the winter. The move is part of a push to cut down on the pollution that has choked many of the country’s cities.

In some provinces, such as Hebei and Shandong, there have been warnings of shortages of natural gas, leading to record prices. In 2017, liquefied natural gas hit RMB7,000 a ton, a six-year high.

‘There is not that much natural gas in our country,’ Yu explains. ‘The switching campaign has made us rely more on imported natural gas; this is another major source of increasing costs for us.’

An additional pressure on the group is the push for controls on electricity prices, reducing revenues further.

One of the main strategies Yu has actively adopted since she joined the group in 2017 is exploring new markets.

‘We need to find new growth pillars in the face of the restructuring reforms in our domestic market,’ she says. ‘We dipped our toe in the water and have put more effort into the internationalisation of the company since the Belt and Road Initiative (BRI) launched.’

The very first overseas project that Shenzhen Energy has up and running is the Sunon Asogli Power (Ghana) in Africa, a joint venture with the China-Africa Development Fund. The first phase of the project, a 200MW natural gas-fired thermal power station, came on line in 2012. A second set of generators began operation in 2017.

‘Following the success of the Ghana project, we are now speeding up expansion in overseas markets,’ says Yu. ‘Currently we are operating in Ghana and Papua New Guinea, and we have set up offices in Hong Kong, Indonesia as well as the US. Expanding in foreign countries is a main direction for the company’s sustainable development.’

But foreign expansion comes with myriad considerations of its own – not least environmental issues, which create both challenges and opportunities, particularly as new regulatory policies encourage the development of more clean power. Yu, a keen environmentalist who has served as supervisor of Shenzhen Mangrove Wetland Conservation Foundation, welcomes this.

‘I have always been passionate about environmental protection,’ she says. ‘Facing the climate change crisis, it is everyone’s responsibility to take action. It is also a sustainable approach for the company’s business growth,’ she adds.

‘We have a five-year plan, which highlights a two-pronged strategy of helping in the transformation to low-carbon energy suppliers,’ Yu says. ‘We are aiming to increase the company’s ratio of clean energy  production.’

In 2017, Shenzhen Energy won a bid for a hydroelectric project in Papua New Guinea with total investment estimated at US$877m; the project is expected to be completed in 2020.The company is also acquiring three California solar power plants from solar panel manufacturer Canadian Solar in a deal valued at US$232m.

‘Our finance team participated in every aspect of the foreign expansion,’ Yu says. ‘Due to different regulatory environments, tax reporting systems in particular, there are many issues that the finance team should pay attention to. In the US, tax schemes for renewable energy are very complicated, for example. Thorough understanding of the target company’s capacity and their tax reporting situation can help us make a proper final bid.

That deal in the US was particularly intense. ‘It was the most complicated deal that I had ever come across,’ Yu admits. ‘The skills and knowledge I learned from ACCA courses – for example, on international tax systems – helped me come through. To me, ACCA members are not only professional accountants; more importantly, they should also be recognised as complete finance professionals for their solid knowledge in accounting, finance, investment and risk management. They are well-equipped to cope with the complexity of economic development and lead the changes of tomorrow.’

Yu adds that support from members and staff who meet through ACCA’s myriad networking events are important for professional development and are an opportunity to connect with peers. In 2016, she became a member of the ACCA Council, a role that allows her to represent the views of members at a time when China is driving forward BRI as well as taking an active role in the revitalisation of the world economy.

While the push abroad proved to be a learning experience, Yu has always worked to remember the importance of protecting the bottom line. Good cashflow is always key to the success of any operation.

‘We have acquired a financial service company and made it our supplement business,’ she explains. ‘It can optimise the funding structure within the group and support subsidiaries that need money for project development.

‘We’ve invested RMB100m in this finance business and we hope that it can help our cash concentration rate reach 80% to 90%. Currently, we are at 70%, which is already quite high.’

Such a large pool of capital makes it easier to expand and facilitates the sustainable development of the company. ‘We have obtained a licence for our finance management firm. With that, we can get  loans from external banks at an interbank interest rate, which is lower than general commercial loan rates,’ explains Yu.

‘Working with IFAC members helped me understand more about the different approaches and systems that other countries are currently adopting,’ she says.

Staying up to date with the profession and technology has been a touchstone through a 30-year career and, she says, something young finance professionals should take into account.

‘Many people say that accounting is a profession that always follows rules, which makes it lacking innovation and creativity; thus there are concerns that many accountants will be replaced by trendy technologies such as big data and artificial intelligence,’ Yu says.

‘What I see, though, is that there are a lot of different rules or formulations. A good accountant decides which formulation has to be applied to your current situation and that judgment can only be fostered by years of experience and understanding of a company, industry and market as well as the global economy. What we should do is to actively use innovative technologies to help us make that final decision.’

The group started out as a provider of electric power in Shenzhen and neighbouring cities in Guangdong province before expanding across China. At the same time it explored renewable energy projects in Jiangsu, Sichuan, Yunnan and Inner Mongolia.

The company has also expanded into the waste disposal industry as part of efforts to tap into the growing environmental protection industry.

In addition the company also owns an ocean-going fleet of six Panamax bulk carriers and a finance subsidiary.

"Facing the climate change crisis, it is everyone’s responsibility to take action. It is also a sustainable approach for the company’s business growth"