The governance lessons of Carillion's collapse

The collapse of Carillion is a lesson in how not to do corporate governance, and companies should see it as an opportunity to reassess their processes, says Steve Giles 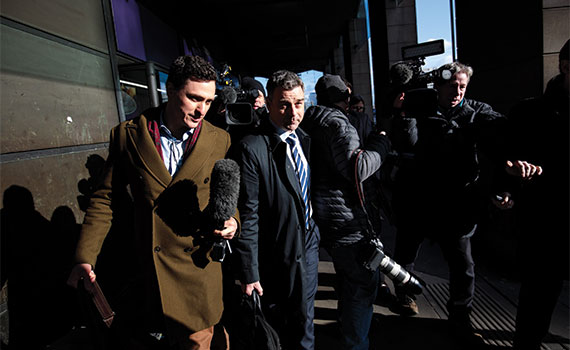 ‘Making tomorrow a better place’ -was the strap-line chosen by Carillion for the cover of its last-ever annual report and accounts dated 31 December 2016. In retrospect, it is hugely ironic.

The accounts were unqualified and were signed off on a going-concern basis on 1 March 2017. Carillion’s finances then quickly unravelled: the company issued the first of three profit warnings on 10 July, announcing £845m of write-downs on four contracts and the resignation of the CEO; the share price plunged 39% as a result; and five months later, on 15 January, the company was forced into compulsory liquidation, with debts of £1.5bn and only £29m cash in the bank.

Carillion was Britain’s second largest construction and outsourcing operation, a FTSE 250 company with annual revenues of £4.4bn. The liquidation has repercussions for all stakeholders: the shareholders who have lost their investment; the 43,000 employees whose jobs are threatened; the 28,000 pension scheme members whose retirement income will be reduced; the thousands of suppliers, sub-contractors and creditors whose invoices are unlikely to be paid; and the many local communities and customers, including the government, who face non-delivery.

Ultimate responsibility for Carillion’s failure lies with its directors, both individually and collectively.

The authorities are now asking tough questions around a central theme: where was the board? While the official investigations focus on the actions of directors, they are also looking at possible governance shortfalls in other areas, including audit and pensions regulation.

Carillion’s case shows 10 areas of weakness. Organisations wishing to promote more effective corporate governance should review these areas, as there are some important lessons to be learned.

Carillion’s board comprised seven directors: an independent chairman, two executives (the CEO and CFO), and four experienced independent non-executives. Their conduct is now the subject of a fast-track investigation by the Insolvency Service. Here are four key areas where their performance is questionable:

Given this, the viability statement in the 2016 report and accounts looks complacent: based on ‘reasonably probable and more extreme downside scenarios’, the directors reasonably expect the company to ‘continue in operation and meet its liabilities as they fall due over the three-year period’. The board may have carried out scenario analysis but was the stress-testing of cashflows rigorous enough?

Second, the published accounts: what questions did the non-accountants on the board (including the CEO) ask to satisfy themselves that the accounts gave a true and fair view? Ignorance is no defence. There are many training options available today, such as Cranfield’s executive development courses and the Institute of Directors’ chartered director programme.

The Financial Conduct Agency is investigating the ‘timeliness and content’ of a series of benign statements Carillion made to the market between 6 December 2016 and 10 July 2017. The directors’ judgment here was probably to protect the share price, as indicated by increasing dividends each year. One of the acid tests of leadership is how well those at the top deal with bad news. The Carillion board failed.

Audit is a vital component of corporate governance. The absence of audit red flags over Carillion threatens trust in the process. The FRC has responded quickly by announcing its investigation into the work of KPMG, Carillion’s auditor since 1999. From a governance standpoint, there are three areas of concern.

First there is the audit report. With hindsight, KPMG’s clean bill of health for Carillion in 2016 is surprising. Its unqualified audit report is now under scrutiny by the FRC. The investigation into KPMG’s role in Carillion’s collapse covers three aspects of its audit:

KPMG says that Carillion was audited ‘appropriately and responsibly’.

Then there is the issue of audit independence and competition. MPs are asking questions about KPMG’s independence. KPMG audited Carillion for 19 years; it has received over £20m in fees since 2008; there was no tender for the external audit service; and two of the last three FDs of Carillion are KPMG alumni. So, how close was KPMG to Carillion and was the relationship too cosy? Also, there are concerns at the extent of the work done for Carillion by the Big Four firms, who have collected a total of £71.6m in fees since 2008. There is likely to be another review of anti-competitive practices.

Finally, internal audit. Carillion outsourced its internal audit function to Deloitte in 2009 and has paid £12m in total fees since then. The audit committee was ‘satisfied’ with internal audit effectiveness in 2016. Did Carillion receive value for money? This depends on the remit, but it seems unlikely if the internal auditors were preoccupied with traditional risk and controls testing. (Deloitte declined to comment.)

There is a step-change taking place in internal auditing, involving directing the work towards helping the board and senior managers protect their organisation’s assets, reputation and sustainability. For example, internal audit should include modelling and managing capital and liquidity risk. This might have been very valuable to Carillion.

One of the most sensitive issues in the Carillion collapse is pensioner rights, with a focus on how the directors discharged obligations surrounding the company’s 13 final-salary pension schemes. The 2016 accounts record a net retirement benefit liability of £587m. MPs and The Pensions Regulator are investigating the circumstances.

Carillion’s plan to address the pensions deficit was based on scheme rules and actuarial recommendations. The directors resisted calls by the trustees to raise funding contributions from the company in 2013 (and earlier years), citing constraints in cashflows connected with its business model. In contrast, they recommended increased dividends – hence much of the criticism. However, the trustees informed the regulator of the disputes. The regulator has powers to intervene (for example, to insist the company redirects its cashflows to repay the deficit more quickly), but it did nothing, only starting its investigation after Carillion’s liquidation. From a governance perspective, this looks like an example of ineffective regulation.

The board sets the tone – the culture and values that determine the environment in place at all levels of an organisation. The decision-making and judgments of the Carillion board are under investigation and are vulnerable to criticism in two areas.

First, executive remuneration: Carillion’s two executive directors received over £2.5m in remuneration between them in 2016, including bonuses totalling £385,000. These payments are substantial but are in accordance with the directors’ remuneration policy, agreed by shareholders. A more worrying aspect is the decision by the board in 2016 to amend its rules and relax the clawback provisions for directors’ bonuses. Whatever the reason, in retrospect this decision appears to be inappropriate.

Then there was the failure to deliver. The speed of Carillion’s collapse is notable. The board was not prepared for its January 2018 debt rescheduling package being rejected by its bankers. Whether through arrogance (thinking that Carillion was too big to fail) or over-optimism, there was no contingency plan. It suggests a lack of urgency and follow-through in the board’s decision-making.

There are tried-and-tested methods for raising cash in an emergency, from a rights issue or a debt/equity swap to selling assets or recruiting a turnaround specialist. The board was working on rescue plans – it paid KPMG £150,000 to prepare for a rights issue that never happened – but it was unable to transform those plans into actions to save the company. Ultimately, the Carillion board failed to deliver.

The Carillion debacle is a timely warning because change is coming to corporate governance in the UK. First, the government has announced a ‘world-beating package’ of reform that it hopes will improve the public’s trust in business. Second, the FRC is consulting on substantial changes to the UK corporate governance code. The revised code is expected in early summer and will apply to listed companies from 1 January 2019. These proposed changes will be reviewed next month.

Steve Giles is a consultant, lecturer and author specialising in governance, risk and compliance

"Carillion’s case shows 10 areas of weakness. Red flags were not raised, whether through negligence, complacency or incompetence"