Crowned Uganda’s CFO of the Year 2017, Alvin Mbugua’s latest role might seem unexpected but in fact it’s a stepping stone in an ambitious career plan 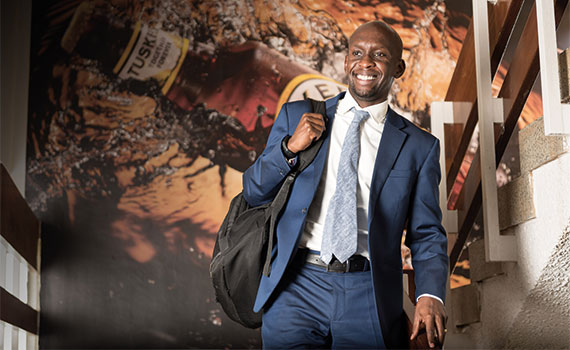 This article was first published in the May 2018 Africa edition of Accounting and Business magazine.

Alvin Mbugua has just secured a new role – and it’s not one you would automatically expect for an ACCA member with his experience. He recently became head of sales at East African Breweries (EABL) in Nairobi, but a month previously he was finance and strategy director of Uganda Breweries, a wholly owned business of EABL, which is itself part of the Diageo group and quoted on the Nairobi Securities Exchange (NSE).

This experienced finance professional is clearly ambitious and the sales position is a stepping stone in a strategic career plan that should, in due course, see him occupy a general manager/chief executive role.

Crowned CFO of the Year 2017 in awards organised by ACCA and Deloitte Uganda, Mbugua is enthusiastic about his new role and the future that lies ahead of him: ‘Part of the beauty and power of being a leader is that you can move into different roles within an organisation; you can transform.’

While, no doubt, there will be plenty of challenges to keep him occupied as head of sales, the business has some established advantages that Mbugua recognises: ‘In a young country, we are one of very few companies that have been around for close to 100 years,’ he says. ‘We have the second largest market cap [on the NSE] and good market share. We also have the cream of the talent driving and shaping the agenda of the market place.’

Mbugua is aiming high. He is clear that to aspire to the role of CEO of a fast-moving consumer goods (FMCG) business, he needs to know the market and the consumers inside out. ‘A CEO needs to be commercially astute and have an instinct to make the right deal. To understand the customer’s perspective, having an understanding of commercial theory and practice is crucial.’

Mbugua knows from his experience in other sectors – he has worked in oil and gas, supply chain and logistics (see CV box) – that in some fields the CFO would be able to move up to the top role without side steps. ‘A CFO in a bank, for instance, is able to move straight to CEO because there [the CFO] is seen as the number two.’

His previous experience will doubtless help him in his present role and beyond. Reflecting on his finance and strategy role, he says: ‘As CFO, I served on the executive team providing leadership on the key areas of the business.’

Always keen to be a positive catalyst for change and innovation, Mbugua says he likes to identify opportunities and then spend time ‘unravelling them to see whether there is a nugget at the centre that will benefit the business’. He has propelled change – including setting up teams and acting as product sponsor – that improved branding, cashflow and profitability. And with particular reference to accounting, Mbugua says that Diageo is working hard to continue automating the finance processes in the business – an important journey given the importance of cashflow and working capital management as the business continually invests in new production lines and facilities. ‘Cash,’ says Mbugua, ‘is the fuel for the car and sets how far you can go.’

In whichever industry he has been working, Mbugua says that the financial roles have fed his interest in the strategic intent of business. He says: ‘My interest in strategy has built over time. The financial piece demands interest and involvement in strategy almost by default. It is in finance that you see all the three elements that feed strategy in one place: data on the financial results, information on the operational efficiencies of the business, and feedback on how the customer is responding to you by way of how products are doing.’

For Mbugua, the finance leader has a duty to communicate that information to the rest of the executive/leadership team, so that they can understand and articulate strategy and see the position of the business compared with the competition.

Then, he says, the business can react by looking at its competencies, seeing what it does better than its competitors and what it can offer customers, which fits in with what it wants. In the end, all that is articulated through the numbers, but as Mbugua notes: ‘The financial results are the end game of a long stream of strategy and activity.’

While strategy describes what a business does, the final key responsibility for finance that Mbugua describes is governance and risk: the building of an ethical framework to describe how a business behaves. He says: ‘It is no good making money, then getting rid of it all in fraud or collusion. For Diageo, a blue-chip company, you can do so much, in terms of having the best controls, to be known as an ethical, upright company.’

His ACCA Qualification informs this view. He says: ‘ACCA gives you character and informs how you should conduct yourself. It is about more than accounting; it is about how you behave as a leader. ACCA provides you with a reputation, but you should always remember that one wrong call can cost you years of your career.’

Ethics are tested in the reality of the rough and tumble of the marketplace. Mbugua says that one of his most formative career experiences was an assignment in Ghana, his first outside Kenya, when he was in his early 20s. The organisation, out of cash and with few records, required turnaround. Within 18 months, the company was profitable and cash positive – but only after Mbugua had borrowed from the directors and temporarily suspended employee pay as the cashflow was repaired. ‘I was at a really young age to make those calls but it formed the backbone of how I lead my life and how I see my abilities. It shaped me.’

From that experience, he says that leadership is ‘about making the best of yourself every day and what is speaking to your life and guiding you. Are you, as an individual, doing the right thing?’ For Mbugua, that encompasses personal discipline, such as food ingested and exercise taken, and extends to the friends you keep and the networks you join. But more than that, he says, leadership is about building up the people around you by spending time with them. Perhaps it is no surprise that he spends time coaching, mentoring and developing the teams he leads.

In his career to date, Mbugua has gained extensive experience of different cultures and ethical environments, having worked in 17 African countries in the course of the past 15 years. He says he feels privileged by the experience and the exposure his career has given him, and that this international platform will spur him to look for a higher profile leadership role in due course of time, perhaps in an organisation such as the African Development Bank or African Union.

Mbugua is a graduate of the University of Nairobi, where he studied geospatial engineering. His interest in accounting and finance started during an apprenticeship with a small organisation. ‘I knew the company made a lot of money, but I realised I did not know how it made it or how the accounting worked.’ This led him to enrol on a course with ACCA.

Around that time, he approached Shell with the aim of pursuing a career in finance. He had some persuading to do: the finance director asked why he wanted to be in finance when, as an engineer, he would have been better suited to operations. However, he landed the job in the finance team and moved up the ranks, at the same time working on his ACCA Qualification. ‘I did not rush it. I took five years in all over the exams, at the same time undertaking assignments in different countries.’

He says: ‘You have to ask yourself: what are the things I am passionate about and where do I want to make a difference? Where do I belong and what do I want to contribute, and how can I go about building that?’

His answer is to work towards developing East Africa. ‘From my travels I see opportunities if the countries across the region can work together to become middle-income countries [as defined by the World Bank]. We have amazing resources, land and weather and we don’t make enough use of these. We should not be competing – that is detrimental. We should be collaborating to develop our muscle.’

"Part of the beauty and power of being a leader is that you can move into different roles within an organisation; you can transform"

‘When you’re young, try to get as many and as extensive experiences in finance as possible so that you can decide what kind of financial career would be right for you.’

‘Don’t focus on only one element of finance [whether that is financial reporting, financial controller, tax or treasury]. Try different roles, even if that means you don’t progress so fast.’

‘When you become a leader, extensive experience is important; you can make better decisions because of your experience.’

Products include beers such as the flagship brand Tusker, Guinness and Serengeti, alongside spirits from the Diageo portfolio and non-alcoholic drinks, including Alvaro and Malta Guinness.

EABL’s Senator Keg brewery in Kisumu, due to open in 2019, will employ at least 12 distributors in the area.