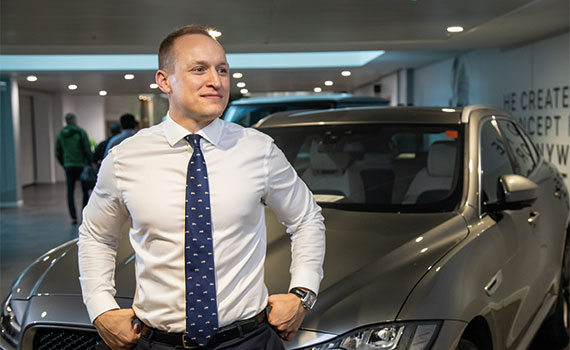 The one thing that anyone working in the automotive sector can say with confidence in 2019 is that within five or 10 years their business will be unrecognisable from today. And no one knows for sure what it will look like. The only certainty is that the product, and the way it is marketed and sold to consumers, will change fundamentally.

The billion-dollar question, to which no one can confidently claim to know the answer, is: what will the future look like? Right now, electric and driverless technology seems the best bet if you want to put money on it, but on the other hand several companies (including Aston Martin and Volvo-owned startup Terrafugia) are working on flying cars. We are at a stage where almost anything could happen. For anyone working in the sector, that is either terrifying or exhilarating, depending on point of view (and capacity for excitement).

Michael Mills, UK national sales finance and business transformation director at Jaguar Land Rover, is definitely in the second camp. ‘This job is hugely fast-paced; it’s exciting and mentally and physically challenging. I love it,’ he says. ‘But we are in a difficult place at a difficult time.’

It has been a testing few years for the automotive sector generally, and JLR is no exception. In the 2018 calendar year its sales fell by 4.6% year on year, with 592,708 vehicles sold in 129 countries (over 80% were bought outside the UK). A recent sudden drop in demand from China is a particular worry – sales fell by 21.6% over the year, while sales for December 2018 were more than 40% down on the previous year.

While what Mills calls the ‘unbelievable level of uncertainty’ created by Brexit has not helped, the broad consensus among sector commentators is that JLR’s focus on ‘clean diesel’ has not paid off, and that the company has been slow in exploring electric technology as an alternative. The Volkswagen emissions scandal that came to light in 2015 inflicted heavy damage on the reputation of diesel cars at a time when sales were already declining; the percentage of new cars with diesel engines sold in the UK fell from 50% in 2013 to 42% in 2017, and across all EU countries from 53% to 44% over the same period.

While JLR, which is owned by Indian multinational Tata Motors, remains a considerable force in the automotive sector, ultimately its success depends heavily on it identifying and investing in the right path for the future. In January 2019, JLR announced its intention to cut its workforce by a further 4,500 following 1,500 redundancies in 2018 (40,000 of JLR’s total headcount of 43,000 are based in the UK). The cuts are part of a transformation programme intended to deliver £2.5bn in cost reductions, operational efficiencies and cashflow improvements over 18 months.

JLR’s medium-term plan includes the launch of three new models of car between 2020 and 2024, which will increase its portfolio to 16 models. It is also introducing a modular vehicle architecture (where a number of different models of car are built using the same basic parts) from 2020 to bring greater standardisation and flexibility into its production line. The modular architecture will replace the six different platforms currently in use, result in lighter and more adaptable cars, and allow hybrid and fully electric vehicles to be produced on the same platform.

Much of the work takes place in JLR’s 380-acre design and engineering centre in Gaydon, Warwickshire, which is undergoing a £200m redevelopment. There is plenty of evidence on the site of the £4.5bn a year that JLR is investing in its future, the bulk of which is earmarked for R&D. So far, its venture into hybrid and electric technology has been encouraging. While sales of Land Rovers fell by 11.4% between 2017 and 2018, sales of Jaguar models, including the all-electric I-Pace model, rose by 7.2% year on year. Even so, alternative fuel vehicles still account for only a small proportion of the total automotive market (just over 6% in the UK). The transition away from petrol and diesel has only just begun, and the way forward is still unclear.

‘We need a number of irons in the fire so that when the market does move, we are ready and capable,’ says Mills. That inevitably means investing in technologies that turn out to be dead ends.

Even navigating the possibilities for electric vehicles is a minefield. ‘The supply chain in electrification just isn’t there yet,’ Mills says. ‘There are multiple possible routes in terms of batteries, for example, and no one knows which will prove to be the best.’

One of the irons recently added to JLR’s fire is a long-term strategic partnership with Waymo, previously known as Google’s self-driving car project (it’s now a standalone subsidiary of Google parent Alphabet). The companies are jointly developing what they say is the world’s first ‘premium self-driving electrical vehicle’, based on the I-Pace, which will form the basis of Waymo’s planned transportation service. Testing was due to start at the end of 2018, and up to 20,000 of the vehicles are planned under the agreement.

JLR and Tata have also invested in the new £150m National Automotive Innovation Centre at Warwick University, where 1,000 staff will combine expertise from academia, the automotive sector and its supply chain to explore advances in technology that can reduce dependency on fossil fuels.

Mills’ role as manager of the finance and transformation teams puts him at the rockface of JLR’s exploration of innovation and performance excellence. ‘It’s my responsibility to manage the delivery of projects and to hold the business accountable,’ he says. But when it comes to business transformation, the customer is very much at the forefront. ‘Our role there is to be the voice of the customer,’ he says. That means finding ways to ease customers’ journey through a changing sector. ‘We developed an app, for example, that assesses your driving, so you can work out if the I-Pace is the right car for you. That helps alleviate any fears people have of going down the electric route.’

Conscience of the business

Mills sees finance as the conscience of the business. ‘There is a healthy level of tension between the business and finance. Innovation costs money and can push boundaries. It’s our job to hold the innovators accountable, but at the same time allow them an element of rope to be creative and explore the possibilities. We need to get the best possible return on investment, so our engineers know they can’t go crazy – there needs to be a business case for the investment.’

Inevitably, this means his role is more about people management than it is about crunching numbers. ‘I do less “doing” [in terms of core finance work] than ever before,’ he says. ‘We have fiduciary duties, but that’s only 10% of what the finance function is today. It’s not a back-office job any more; you can really add value to an organisation, and ultimately, it comes down to relationships, people skills, emotional intelligence and your ability to influence the outcome. There are big characters in both camps – in finance and in R&D – and if you are at loggerheads, the work of both will be inadequate.’

Mills was born into a military family and had intended to join the RAF (‘I had a love affair with Top Gun,’ he says) before a rugby injury forced a change of plan. The maths graduate chose accountancy and a commercial route to qualification, winning a coveted place on the graduate programme at Johnson & Johnson. ‘I was given the option of a couple of qualifications but I chose ACCA because it felt more comprehensive and touched more bases, like law and ethics,’ he says. He spent a year working on an acquisition in Moscow before a call came about a role at McLaren Automotive, which was developing a supercar for the commercial market.

Mills describes the then CFO at McLaren, Richard Molyneux, as ‘an inspirational man’, who became his mentor, so it was no surprise that Mills followed Molyneux in moving to JLR a few years later, although he acknowledges the switch was a risky one. ‘I was looking for a change and the next challenge, and I knew I wanted to stay in the automotive sector, but I was nervous of the step-up to JLR and where it was going,’ he says. ‘It was in a period of change, but as I see it, that means there is an opportunity for you to add value. And they have invested billions into innovation and future growth, have strong aspirations and good people. It’s very exciting.’

Ultimately, though, he is not convinced the automotive sector will alter beyond all recognition, at least not in this immediate transformational phase. ‘We have no idea what the business will be in 10 years, because everything is changing, including the retail model. How are we going to sell cars in the future? Through our phones? No one can say for sure. But while the model is changing quickly, I don’t see it being completely torn up and thrown away. Customers still want what they want.’

"We need to get the best possible return on investment, so our engineers know they can’t go crazy"

‘Generally, people are where they are because they have worked at it. I’m not the most gifted accountant technically, but I will be the hardest worker in the room.’

‘No one is good at anything when they first start. I read a lot and listen to audiobooks, picking up nuggets of information that I can then test at work.’

‘You are only as good as your network. Invest in finding good mentors, and invest in yourself.’