Neither youth nor gender has been an obstacle for Prudential Life Insurance Ghana CFO Cherise Ige FCCA, who moved to Africa for its golden opportunities 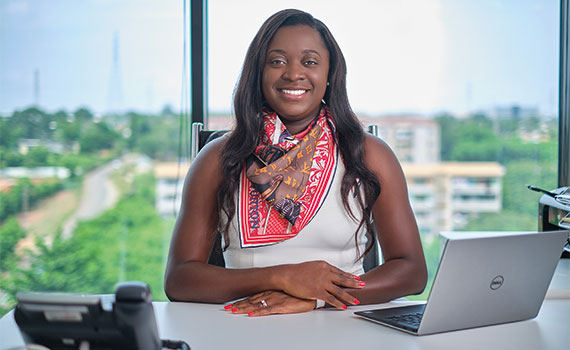 In 2013, when the multinational insurance group Prudential announced that it was opening for business in Africa, it predicted that the next century would be ‘the African century’. The potential was clear – at the time, less than 1% of the 1.2 billion people living on the continent had life insurance.

Prudential’s first foray into the African market was in Ghana (Kenya followed soon after), when it bought the Ghanaian insurer Express Life from the specialist microfinance fund LeapFrog Investments. At the time of the acquisition Express Life had about 16,000 health and life policies on its books. According to Swiss Re, life insurance premiums in Ghana amounted to US$171m in 2011, representing just 0.5% of the country’s GDP.

For Prudential, though, the potential of a market serving the protection needs of an expanding middle class in one of the fastest-growing regions in the world was – and is – clear to see. Cherise Ige FCCA, CFO of Prudential Life Insurance Ghana since 2016, says: ‘Investment in the continent is constant and there is a fast-growing middle class here. We are doing well and keeping other insurers in Ghana on their toes. We are the fifth largest insurer in the country now, and the scope for growth is enormous. If you have the opportunity, Ghana is where you need to be.’

Prudential Life Ghana now has more than 500,000 customers. Its products include a wealth plan that offers investment as well as protection for the policyholder – aimed at the better-off, who may be saving to buy a home or finance university education for their children. It includes life and serious injury cover, and premiums and interest are repaid if the policyholder completes the policy term without making a claim.

Establishing the business, though, has been about much more than selling insurance. Until recently, Ghana has effectively had no cultural convention of insurance – and virtually no actuarial profession.

‘When we arrived in Ghana there were a small number of actuaries in the entire country,’ Ige says. ‘We needed to tackle this in order to improve insurance penetration nationally.’

The company has set up a programme that supports top actuarial science students at three universities in Ghana with grants for books and exam fees, and apprenticeships for the best (almost 100 have benefited so far). It has also set about educating the population about the benefits of various forms of insurance. ‘We need to educate the market,’ Ige says. ‘People don’t necessarily understand why they need insurance. Of all insurance products, life insurance is the easiest to explain.’

Ige heads a team of nine in the finance function, which supports a rapidly expanding business. ‘When you are growing so quickly, there is always a lot to be done and you have to be able to adapt quickly,’ she says.

A top priority has been making the customer experience as good as possible. ‘We want to make it easy to pay customers’ claims to build trust in the insurance market,’ she says.

Budgeting is also key. ‘One of the central challenges is managing inflation increases and foreign exchange exposure,’ says Ige. ‘As a result, our budgeting process is very rigorous, and the finance function is responsible for its delivery.’

There are two qualified accountants on her team and another three are part-qualified. Ige herself was offered the CFO role four years after joining Prudential on a contract basis to help it implement Hyperion software.

‘I had an itch to work abroad at the time and welcomed the opportunity to work in Ghana,’ she says. ‘Everyone has been very welcoming in Accra and it is always sunny. Working here has really exceeded my expectations.’

Born in Jamaica, Ige has forged an impressive career after developing an ‘intense focus’ on accountancy thanks to a school careers day. ‘When I was in 11th grade, a man came in to talk to us about becoming an accountant. He seemed very sophisticated and well dressed, and said, if you want to be wealthy, be an accountant,’ she recalls, laughing. ‘That was it for me. Until that point I had little interest in the profession. That man should be proud because someone heard what he was saying!’

She moved to the UK to complete a degree in accounting with law, before qualifying with a small firm. ‘The ACCA and CIMA qualifications were the only ones I had come across in Jamaica, but I did look at the others when I was studying,’ she says. ‘I chose ACCA because of its flexibility in giving me the opportunity to work in either management or financial accounting across industries. It has helped me tremendously. As soon as I qualified, the job market opened up.’

She has worked in a number of sectors, from fashion to financial services, including time as a contractor in order to widen her experience. One of her most significant experiences came at food processor Tate & Lyle, where she started out as a group reporting accountant before shifting to project lead on a global restructuring initiative.

‘The directors asked me to lead the financial segment of a project team that was restructuring the entire reporting function – an opportunity that came at exactly the right time for me,’ she says. ‘Tate & Lyle is like Prudential in that it has a lot of business units, and the project plan was to switch from reporting on an entity and regional level to reporting by product line. We then pushed that restructure through globally. The project allowed me to gain real insight into the company and meet unit heads across the globe.’

Her move to Prudential in 2011 gave her more exposure to financial services. It was a decision that has paid off, having led to a challenging and high-profile CFO role in Ghana.

It is also abundantly clear that she loves working and living in the Ghanaian capital Accra. ‘Cultural differences are very easily managed, and there is huge scope for growth across the board,’ she says.

While Prudential Life Ghana has an excellent record on gender diversity – Ige is one of five women (63% of the whole team) at senior executive level – she is well aware that women in business, and in Africa in particular, can struggle to reach their full potential. Since 2017 Ige has been an ambassador for Women in Africa, which supports and promotes African women entrepreneurs.

‘There are some really talented women on boards in Ghana,’ Ige says, ‘but, overall, women need help across Africa. We support and encourage them, help them to find funding, encourage cross-country dialogue and provide mentorship. I’m up for anything that helps women achieve what they can and need to achieve.’

Ige’s impact in Ghana goes beyond business interests. She is an avid netball player who has played at country level in the UK and represented England as part of its national indoor team. ‘I’ve played since I was 11 and it’s a real love of mine,’ she says. ‘It’s not a popular sport at all in Ghana, so when I arrived here I created a netball forum and negotiated with the university in Accra to allow us to use the netball courts. I have gifted sports equipment to the university and coach members of the university and the forum I set up. We have more than 70 members now. It’s great to have something else to turn to when you have a stressful job.’

As for Prudential, since opening in Ghana and Kenya, it has added subsidiaries in Cameroon, Côte d’Ivoire, Nigeria, Togo, Uganda and Zambia. In a similar vein, Ige says: ‘The world is full of opportunities. You just need to grab them.’

"The scope for growth is enormous. If you have the opportunity, Ghana is where you need to be"

51%
The stake acquired by Prudential in leading life insurer Group Beneficial, which operates in West and Central Africa, enabling the company to enter Cameroon, Côte d’Ivoire and Togo