Coffee-making dogs and biometric monitoring: inside the brave new office

From coffee-making dogs and biometric monitoring to augmented-reality meetings and AI auditors, Timandra Harkness peers into the brave new world of tomorrow’s workplace 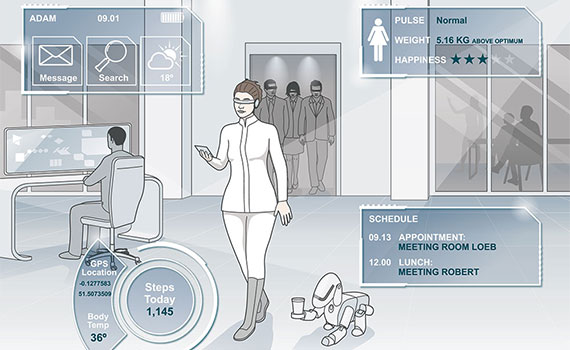 ‘Good morning, Timandra!’ The lift always sounds so perky, glass doors parting automatically as they detect the chip embedded in my hand. I don’t even need to tell it which floor I need. As I glide upwards, my virtual assistant Adam briefs me for the day ahead. I call him Adam because he’s the invisible hand that organises my life. ‘Your first appointment is at 09.13 hours in meeting room Loeb,’ his soothing voice tells me. ‘Your pulse is normal, and your weight is 5.16kg above optimum.’ The lift shudders to a halt at floor 713. ‘We therefore recommend that you walk up the final three flights of stairs.’

Bother the workplace wellbeing programme and its biometric monitoring. Officially it is optional, but it comes with free health insurance and an extra week’s leave so, really, who’s going to turn that down? Apart from Dave in cybersecurity, obviously.

By the time I reach my floor I am too out of breath to say ‘skinny camel-milk decaff latte with a Modafinil shot’, so it’s a good job Flynn knows my regular order and has it ready in his outstretched hand. Well, less a hand than a paw. ‘Good boy, Flynn,’ I say. Apparently dogs in the workplace are good for stress but because Iris in the ethics department is allergic to real ones, we got a robot version that also makes coffee and remembers what everyone drinks. Apart from Dave in cybersecurity, who randomises his coffee drinking so Flynn can’t detect a pattern.

I just have time before my 09.13 meeting to audit the annual accounts of Toyota General Ford. Or rather, to get RITA to audit them. Now that all financial records are kept on blockchain, it’s a simple matter of randomly sampling the automated audits to check they haven’t missed any anomalies – ideal for basic artificial intelligence (AI) like RITA, the Random Interaction Trail Auditor.

I finish my coffee and head into Loeb for my meeting. As I don my augmented reality headset I check that I’ve set my personal appearance settings to ‘smart’, and note with pleasure that the algorithm gives me a tie that subtly reflects the decor of the client’s own office. It has also adjusted the background view to match the other person’s time zone, so I am apparently backlit by a full moon over the sea. These psychological details are important because it’s a difficult meeting.

The problem is that a year ago I recommended a clever AI-based system that pays bonuses in cryptocurrency, converting them into local money when the exchange rate is at its most tax-efficient. That was fine until the company’s local tax office introduced its own AI, allocating taxation points dynamically without prior notice. And if you’re wondering how a government can get away with that, you haven’t been following the news. Since the Revenue Riots of 2024, financial ministries can’t crack down hard enough on even the most innocent tax-minimising schemes. Anything else would be political self-destruction.

While our own software runs a million stochastic models to predict the best way our client can adapt to the new regime, my job is twofold. First, mollify the client by reminding her that being seen to pay more tax is the best way to build a loyal customer base. Second, distract her with a new economic forecasting model that’s even better than the last one.

I am especially pleased with this because it was my own idea. Ever since the link between conception rates and economic growth was discovered in 2018, we’ve been buying pregnancy data from healthcare-wearable companies. Since we know when birthrates are falling, even before the mothers-to-be know, we can hedge against the recession that always seems to follow.

But that’s just one of millions of datasets we feed into our neural network. The algorithm also tracks bankers’ heart rates, skyscraper dimensions and internet searches for vintage Ikea furniture. (No, I have no idea why, but who cares? It works.) The only problem is, all our competitors have access to the same datasets. We need some kind of input they don’t have, a different window onto the future.

A virtual meeting with a colleague on four-year paternity leave gave me the idea. The chaos inflicted on him by a toddler was just the kind of random variable we needed. After all, our models don’t need to be more accurate than our competitors. Just being unpredictably different will give us the edge often enough to impress our clients. So now a group of children convenes once a week and their outputs go into FINN, our Future Investment Neural Network.

Obviously that’s not how I describe it to the client. For her, it’s a ‘focus group of deep-future investors, playfully scenario-building in a sandbox environment’. Nobody needs to know it’s six infants playing Mars Colony or Pet Cloning Clinic in a real sandbox.

When I get back to my desk, RITA has the audit ready for me. I spend the afternoon checking anomalies in carbon credits in the Asia-Pacific fuel cell sector. Probably an innocent case of mixing up their carbon-absorbing algae with their hydrogen-generating algae but one can’t be too careful; there are stiff fines for quota infringement.

As I pick up my jacket to go home, my virtual assistant Adam murmurs: ‘You didn’t seem very happy at work today. Want to talk about it?’ That’ll be the facial expression analysis program, or maybe my embedded chip is now measuring my cortisol levels. But I don’t really want to talk about it because I’m looking to move on from EYoitteKPWCMG to one of the other Big Four firms. Kothari Lodha or Ruihua BDO or, if I do really well, Zolfo Begbies Saffery Mazars.

Clearly I don’t want to mention this here, not even to a virtual sympathy-bot. So I mutter something about stress and accept the ‘optional’ post-work mindfulness session in the Easterlin Wellbeing Spa.

I hope the software can’t tell from my expression that I’d rather be having a beer with Dave from cybersecurity. I’ll have to text him our code-word to tell him I can’t make it after all.

Timandra Harkness is a writer, presenter and comedian