In this post-truth world, activist CEOs should support the common good in business and society, and drive the change that disillusioned workers want to see, says Robert Phillips 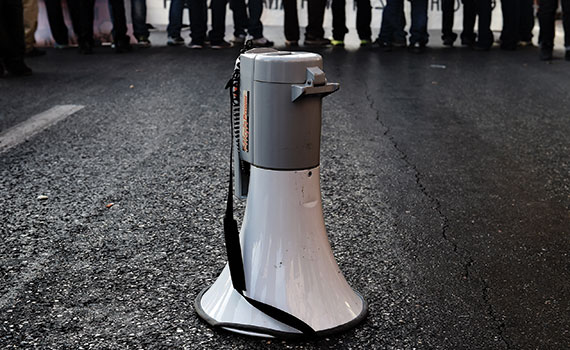 The only good thing about Brexit,’ a politician friend remarked recently, ‘is that it finally woke everyone from their slumber.’ The same could be said of the chaotic insurgency of Donald Trump. We have quickly realised that the settlement on which we once relied is broken and the status quo is not the answer.

This principle applies to business as well as politics – though some still believe business activism can be contained. I argue otherwise: contagion is inevitable. Citizens are angry and their voices have gone unheard, as workers as well as voters.

In his book The Second Curve, the management guru Charles Handy points out that, in any corporation, 80% of the workers are disengaged and don’t care, while 25% of the 80% would actively sabotage the organisation they work for. No longer can any leader rely on the dull, controlling managerialism of the recent past, and a corresponding corporate and political obsession with ‘risk mitigation’. Let’s face it, no nation that was risk averse would have voted for either Brexit or Trump.

Some are calling this ‘the post-truth age’; others ‘the new normal’ or the ‘interregnum’, where the old is not yet dead and the new has still to be born. Nomenclature matters little. ‘To live in freedom,’ commented the 19th-century French political scientist Alexis de Tocqueville, ‘one must grow used to a life full of agitation, change and danger.’ This is the world as it is now – seen as much in a workplace where people are threatened by automation, zero-hours contracts and loss of voice, as it is in the corridors of old political power.

Activism on the part of senior business leaders – sparked into life from Silicon Valley in the aftermath of Trump’s election as US president – is long overdue. Too many CEOs have been silent for too long on issues from corporate misdemeanours (carbon emissions, harassment, bribery – take your pick) and executive pay, to climate change and slave labour, hoping the status quo will preserve them. Like their political counterparts, they have relied on spin (PR or the ghastly CSR – corporate social responsibility) to save them. It can’t and it won’t.

A failure to become active now – to act with the radical honesty and transparency that shuns spin altogether – may well lead to sudden insurrections in the workplace, too. If any CEO still believes that they are in control, in reality that belief lies shattered. No one is in control any longer – even if you have the words ‘chief executive’ on your business card. Old hierarchies continue to crumble and fall.

The message of the anti-capitalist Occupy movement early this decade should have served as the wake-up call to the business world. ‘We are the 99%’ fired a warning shot of disaffection (‘a cry of anger by people who felt they had been abandoned by their leaders’, as the physicist and cosmologist Stephen Hawking later put it) that was soon to multiply inside and beyond corporations and ultimately manifest in votes for Brexit and Trump.

Activist business leadership at that point – or public leadership with a commitment to genuine accountability and public value – would have enabled CEOs to escape from their boardroom bunkers and PR-led echo chambers; listen to dissenting voices inside and outside their organisations; undo the hierarchies that were the source of their power; establish new networks among co-workers and wider stakeholders that supported the many, not the few; show humanity and vulnerability; and create new models of shared or common value that placed people and planet alongside profit. This is what CEO activism looks like in practice. Ironically, in a world where every leader and commentator seems to seek the holy grail of trust, measures such as these would have surely helped earn that trust.

In this new world, it is no longer maverick but essential that business leaders escape the beige and the bland and have a definite point of view. Among the global corporates, Unilever’s Paul Polman is perhaps the best-known example, championing his Sustainable Living Plan. Similar endeavours are being pursued by KPMG in its Global Responsible Tax Project, the UK’s Royal Institution of Chartered Surveyors in its public interest programme, and the Chartered Institute of Personnel and Development in its initiative The Future of Work Is Human. All put common good front and centre (in the interests of transparency, they are also  clients of Jericho Chambers).

Enlightened, activist CEOs will still, naturally, behave partly out of economic self-interest, protecting their licence to operate. But business activism can go beyond this and create a licence to lead. Activist CEOs can support the common good in business and society – and drive the change disenfranchised and disengaged workers want to see. While there are legal and regulatory obligations placed on every organisation, there can be no hiding behind these. Nor can organisations blindly pursue the primacy of shareholder value, called out by the much-admired business leader Jack Welch as ‘the world’s dumbest idea’.

To put it another way, the economist Milton Friedman was wrong. The social responsibility of business is to not to maximise profit. There is a human, moral and ethical dimension to business. But understanding this is only part of the journey. Actively supporting the common good is the right thing to do. Human value trumps shareholder value in this new world, whatever mad indices the markets may sometimes show.

Activist leaders in 2017 face four immediate battlegrounds. First, they will have to fight for truth – and not be beguiled by the dangerous pursuit of ‘fake news’ that so delights the US president. They will need to take this fight to the frontline of Facebook, Twitter and Google which, despite their recent protestations, remain part of the problem, not the solution.

Second, they need to put away their superhero capes and realise that this is no longer a battle they can fight alone. Activist leaders, supported by the connecting power of digital, will coalesce within new ecosystems of enlightened networks, finding like-minded partners and bringing together people and organisations to fight for the common good on real societal issues – from healthcare to education, affordability and housing to climate change. This will demonstrate a radical departure from the lipstick-on-a-pig approaches of conventional CSR.

Third, activist leaders in business will champion human potential. The motto should be ‘citizens – or people – first’. They will need to challenge the false orthodoxy of measurement (we measure ‘everything … except that which makes life worthwhile’, as Senator Robert Kennedy put it half a century ago), and resist the lure of buying ‘purpose’ from slick advertising agencies.

Finally, they will lead with courage – the courage to embrace the agitation, change and danger about which de Tocqueville wrote; the courage to speak with a ‘political’ voice; and the courage to listen to wise crowds of employees and stakeholders, embrace vulnerability and welcome dissent.

These are the new truths of the post-truth age. As George Orwell wrote: ‘In times of universal deceit, telling the truth is a revolutionary act.’ The counter-revolution can start now – and in the boardroom.

Robert Phillips is the author of Trust Me, PR Is Dead and co-founder of consultancy Jericho Chambers. He is a visiting professor at City, University of London’s Cass Business School

Nigeria has a viable government with control over most of the country, but there are significant levels of corruption – Nigeria is 136th in the 176-country Transparency International Corruption Perceptions Index.

To succeed, says Tosin Oluyemi, a Lagos-based finance professional and accountant at KPMG, companies need to look carefully at recruitment, appointing effective staff who understand the local business environment and how to comply with regulation. ‘Issues that overseas organisations find tough will pose little difficulty for those who know the business,’ he says. ‘So how far you can do business depends on who you’re working with.’

Tax officials can be unpredictable, but as Oluyemi notes: ‘A skilled tax manager can help a foreign company weather the storm of a tax default and continue to do business.’

Businesses in Syria – now in its seventh year of conflict – have to run the gauntlet of war, corruption and international sanctions. But that has not stopped accounting majors EY and Deloitte from operating there; Lebanese bank subsidiaries also conduct business.

Manufacturers and traders, however, have to pay off state and non-state actors at checkpoints to get goods from A to B.

Connections are key in Syria. ‘Big traders need preferential deals [with certain members of President Bashar al-Assad’s family], and everyone has a network,’ says a Syrian manufacturer. Moreover, traders require a good global network to get around sanctions.

The business opportunities brought by South Sudan’s independence in 2011 have largely disappeared since civil conflict restarted three years ago. Though the government – a party to the violence – has continued to welcome international businesses, security concerns and a turbulent economy make operations virtually impossible.

Ian Dent, managing partner of accounting firm IDIAA, which operates out of South Sudan’s capital, Juba, says one of the biggest problems is rampant hyperinflation (at 470% last December). Meanwhile, companies that pay employees in US dollars face currency shortages. ‘The international businesses that have been successful are in the services sector – for example, banks and insurance companies,’ Dent says. However, those fields are now crowded.

Ranked 16th on the Fund for Peace Fragile States Index, Zimbabwe is laden with potential investment opportunities, including mining and tourism, but has failed to attract overseas investors. Disincentives include an ailing economy, a long history of political volatility, company closures and a proactive government policy favouring local black-Zimbabwean-owned businesses.

Despite this, Kudakwashe Basikoro, a Harare accountant, says investors eyeing Zimbabwe’s financial sector should not be worried by the country’s Indigenisation and Economic Empowerment Act, which gives the government power to insist on 51% control of businesses by Zimbabweans. ‘The financial services industry is one of the sectors that have been exempted from the indigenisation laws,’ he says.

Concerns have, though, been raised about the release by the government of new ‘bond notes’, supposedly backed by US dollar reserves, to serve as a crypto-currency. The country has had no local formal currency since the collapse of the Zimbabwe dollar in 2009 amid hyperinflation. ‘The absence of a lender of last resort is a big challenge in the financial services sector,’ Basikoro says. ‘In addition to this, treasury bills are not being liquefied on maturity. These are some of the challenges that investors have to contend with, should they decide to invest in Zimbabwe.’