Devolution in Scotland is causing tax anomalies that affect many employees crossing the border, not just military personnel. And the situation is set to get even more complex 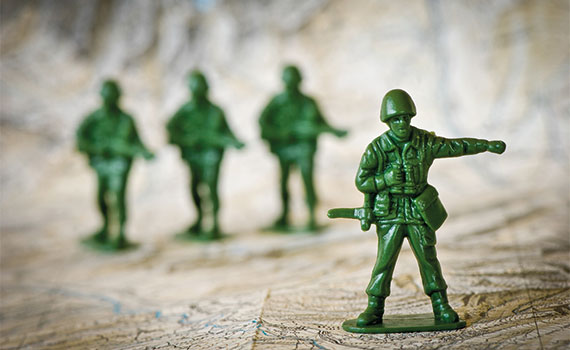 The tax anomaly resulting from Scottish devolution that has affected English submariners based in Clydeside has ramifications for any employee crossing the border.

Up to 8,000 military personnel in Scotland face paying more tax than their UK counterparts after Scotland’s new income tax system came into force in April. UK defence secretary Gavin Williamson has intervened to reassure servicemen and women that he is looking to mitigate the negative impact of Scottish taxes.

The new Scottish system introduces five income tax bands and rates versus three bands in the rest of the UK. As a result, those earning more than £26,000 will pay more tax compared with their rest-of-UK colleagues. In terms of the military, those affected include 1,400 submariners due to move to the Clyde naval base by 2020 and another 400 personnel moving to RAF Lossiemouth.

But this won’t just affect the armed forces. ‘Differential tax rates in different countries within the UK make relocation of staff more difficult,’ says Paul Falvey, tax partner at BDO. ‘Hence the suggestion of topping up the military salaries so that those posted to Scotland get the same take-home pay as colleagues south of the border.

‘As the differences in effective tax rates change over time, there may eventually be significant difference in take-home pay for individuals working in the same job in different countries. This may make recruitment more difficult in the high-tax location, and may even encourage businesses to form a local subsidiary, much as now occurs across the EU.’

Tax anomalies caused by devolution could in theory lead to more border-hopping to save money. ‘For example, you may choose to buy a house in Wales rather than England, as there is less Welsh land transaction tax to pay than English stamp duty land tax,’ says Falvey. ‘There may also be advantages for the self-employed. For example, under the current rules a married couple who both earn £155,000 would pay a combined £4,000 more in tax a year if they live in Scotland.’

Falvey believes the best long-term solution is for the regional UK governments not to use their powers to vary tax rates and for the tax rules to be simplified. ‘Unfortunately, simplification often demands political bravery, as it can mean that some taxpayers lose out, so it’s difficult to see that happening any time soon.’

At RSM, senior tax partner George Bull points out that the Scotland Acts of 1998 and 2012 made it possible for a Scottish and English taxpayer sitting next to each other and doing the same work for the same company to be paying different amounts of tax. ‘That possibility has now become a reality,’ Bull says. ‘This is no different to the situation experienced by multinational corporations seconding employees from one jurisdiction to another.’

Employers with staff who find themselves in this position may have little alternative but to fund tax equalisation arrangements for their employees, as many international businesses already do.

‘The only surprise here is that the UK armed forces hadn’t seen the problem coming, although they had a minimum of six years to take on board the implications of the legislation enacted in Holyrood and Westminster,’ Bull adds.

When a tax is fully devolved, such as a land and buildings transaction tax or a waste disposal tax, its administration and collection is relatively straightforward because the relevant tax authority can identify how much tax should be paid by whom, on what and when, Bull says. ‘The patchwork of changes we’re seeing across the UK, where particular differences are accompanied by partial powers, takes the complexity and potential issues to a completely different level.’

Employees who are Scottish taxpayers, wherever they work, should ensure their PAYE codes include the letter S, Bull advises. He adds, ‘Unless and until income tax is wholly devolved to a particular country, there’s no sign of these difficulties getting any easier.’

The UK already has a pretty complex tax regime. Divergence – particularly around tax – just adds another layer of complexity, according to Chas Roy-Chowdhury, head of taxation at ACCA. ‘We’ve got government employees – military personnel – who are not happy that they’re going to be taxed more if they’re positioned in Scotland not of their own choice,’ he says. ‘So in that sense I think it is throwing up problems in having devolution in tax.

‘At the moment, the rule changes just apply to Scotland, but there may be changes coming down the pipe too for Northern Ireland – for example, the rate of corporation tax will be cut to 12.5% if they get their power-sharing agreement sorted out.’

Roy-Chowdhury also thinks that more such issues are going to surface. He says: ‘I was on the committee run by HMRC looking at the devolution of tax, and we’ve got problems around lorry drivers who go in and out of Scotland and the rest of the UK. We’ve got farmers who move things right across the border. There are a whole host of other complexities where issues are about to be thrown up by having a divergent tax policy.’

Legal divergence in areas such as tax avoidance further complicates matters. For example, the Scottish government has set out a general anti-avoidance rule (GAAR) for the country that sets the bar for Revenue Scotland to take action against artificial tax avoidance schemes lower than it is for HMRC. The GAAR equivalent across the rest of the UK is a general anti-abuse rule.

‘So all round, there’s a lot of new complexity and uncertainty caused by politicians rather than a tax move, if you like,’ Roy-Chowdhury adds. ‘If we can’t have a single tax system, then the politicians need to work on their devolved plans – including the rest of the UK – and seriously look at simplifying the tax regimes.’