Treading on toes and making enemies is all part of the job for Zimbabwe auditor general Mildred Chiri ACCA, so qualifications and a thick skin are essential attributes 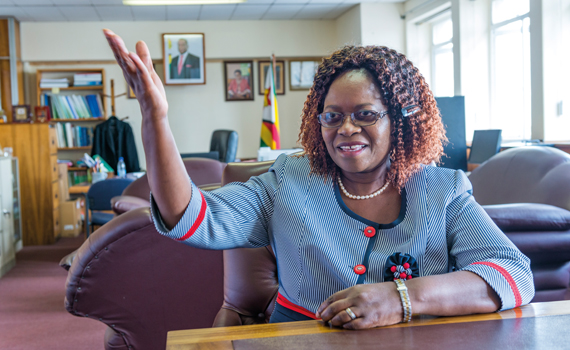 Mildred Chiri ACCA, auditor general of Zimbabwe, didn’t expect to build a career in public sector audit. She joined what was then the Office of the Comptroller and Auditor-General in 1983 after gaining a degree in accountancy. ‘I didn’t think I would stay long, but they had respect for people with knowledge of accounting and I was given some responsibility,’ she says. ‘I was exposed to a number of ministries and found it interesting.’ Every time Chiri considered leaving, an increase in salary or a new opportunity persuaded her to stay. As a result, she rose steadily through the organisation, ultimately being appointed comptroller and auditor-general (as the role was then called) in 2004.

The role made her responsible for the audits of Zimbabwe’s public sector, including government ministries and public sector enterprises. In 2013, Zimbabwe’s new constitution also gave Chiri’s Office of the Auditor General responsibility for auditing all the country’s local authorities. However, around half of the audits of the public enterprises and most of the local authority audits are currently contracted out to private firms due to a lack of resources.

Over the years she has been in charge, Chiri’s office has produced reports highlighting a range of concerns in Zimbabwe’s public sector. ‘One issue has been the lack of corporate governance in most public entities,’ she says. ‘In some cases, there was no board of directors, or the board was not fully constituted because the government took a long time to fill vacancies.’

There was also the issue of ‘ghost workers’ – false names registered on the public payroll. ‘The total financial prejudice could not be readily quantified but it was substantial,’ Chiri admits. Following this audit finding, the government took steps to clean up its payroll by carrying out a head count of all employees in central government. ‘It flushed out a lot of names that had left the public service but were still appearing on pay sheets,’ says Chiri.

Cases of excessive remuneration in some entities have also been revealed by the team’s investigations. ‘The challenge there was that the boards approved the excessive remuneration. But morally, the sums were just too high,’ she says. ‘That caused a lot of outcry from the public.’ Chiri’s team now looks at remuneration as part of its risk-related activities.

Audits have also identified procurement problems. ‘We found some tenders had not been conducted according to the rulebook,’ Chiri says. For example, instead of holding a formal tender process as required when a procurement value exceeds a certain threshold, contracts were being split into lower-value segments. This meant they fell below the value threshold and so could be awarded to any company invited to quote for the work in an informal process. ‘If it’s a formal tender, it’s open to everyone,’ Chiri says. ‘It goes into the newspapers and anyone can bid. What we found was that there was a tendency to turn away from tendering and split orders, and some of the companies that then bid were related – they shared the same directors.’

Publishing reports that identify weaknesses in Zimbabwe’s public sector can be challenging. ‘Human beings do not like to be criticised, especially in public,’ Chiri says. ‘It’s OK when you talk with people during the audits or in meetings but when it comes out in the press, that’s when you find out you are creating enemies; that’s the challenge. I have come to accept it, as this is the nature of the job. When you go after some people’s weaknesses, you are bound to step on their toes and they will not like you, but there are some who appreciate that I am doing my job.’

Having a thick skin is a necessary quality for fulfilling her role. ‘If you want to live a quiet life, do not be an auditor,’ she says.

Another challenge is that some audit report findings are exaggerated in the media. ‘They want to sell their papers, so they exaggerate,’ she says. ‘I have gone to the press and told them to retract their stories in some cases.’

One instance of erroneous reporting concerned Chiri herself, when it was reported last year that she had been dismissed by then-president Robert Mugabe. ‘Somehow the press got it wrong,’ she says. ‘I wasn’t removed from my post and at no time did I leave my post; it’s just that my contract came to an end in February 2017.’ Someone else was initially lined up to take over, but parliament did not give its approval. ‘So I continued in my post and when the minister forwarded my name [for reappointment] parliament accepted it,’ she says. ‘They said they had confidence in me and that I should continue.’ Chiri’s contract had yet to be finalised at time of interview but will be for six years, as stipulated by the constitution.

Does the political environment affect the work of the auditor general? That is a difficult question, Chiri says. ‘What I can say is that there are indications that the new government has the will to ensure there is transparency and accountability. That tone at the top is very heartening for us. If that momentum is maintained we are hopeful the recommendations we make will be implemented in future.’

Once resources become available her plans for the Office of the Auditor General include setting up a forensic audit unit. ‘We receive so many requests to conduct forensic audits and we have to contract those out,’ she says. ‘I’m hoping we can do this in the next two to three years.’ She also wants to expand the value-for-money unit, which could look, for example, at why some public entities fail to deliver adequate services, such as water supplies and water management services. ‘We need to carry out more value-for-money audits so that we satisfy parliamentarians as to the reasons why services are not delivered or are inefficient, and then we can give recommendations on what has to be done.’

Chiri is also overseeing a move towards increased professionalisation in the Office of the Auditor General. ‘Accounting and auditing standards are always changing, so we need people who are abreast of those changes,’ Chiri says. ‘We need people who are professional in their work and eager to continue their professional development.’ She is encouraging everyone in the team to study with one of three recognised accountancy bodies, including ACCA:  ‘We are currently sponsoring 16 members of staff to study for the ACCA Qualification, and 38 others are funding themselves.’

During her career, Chiri herself has gained multiple qualifications. For example, in 1991 she qualified with the Institute of Chartered Secretaries and Administrators (ICSA) in Zimbabwe and in 2002 she became an articled clerk with the Institute of Chartered Accountants in Zimbabwe. She has added to her credentials even more recently, gaining the ACCA Qualification in 2015.

‘I’m in my 50s so it was a way of motivating my staff, walking the talk, so that I could feel confident when saying we must be professionalised,’ she says. ‘As I am now a professional accountant myself, it’s easier to encourage others to follow that route.’

Gaining the ACCA Qualification was challenging. ‘It was hard studying at the same time as doing my job with the tight deadlines involved,’ she says. ‘Even when I was on business travel I would go with my books and study on planes. It was tough but I felt it was worthwhile. The qualification commands respect from the clients you audit.’

Chiri’s work has received public recognition. For example, in 2016, she won the Women’s Top Leadership Excellence Award for the government sector from the Women’s Institute of Leadership. She also gains huge personal satisfaction from her role. ‘What I enjoy most about my work is when the final report is out and it’s on time,’ she says. ‘When I see it published in the press, I see the end-product of the sweat of the whole office.’

She recognises there is still much work to be done, however: ‘I want to leave a good legacy so that whoever comes after me can build upon my work, rather than starting from ruins.’

"There are indications that the new government has the will to ensure there is transparency and accountability. That tone at the top is very heartening"

The Office of the Auditor General (OAG) is in charge of auditing all government ministries, parastatals, public enterprises and local authorities.

The OAG should have more than 370 staff, but currently employs around 320 due to a five-year recruitment freeze necessitated by Zimbabwe’s economic difficulties.

Under Zimbabwe’s 2013 constitution, the auditor general is appointed by the country’s president with the approval of parliament and can serve a maximum of two six-year terms.

‘Be focused and do your best in whatever you do. Ensure you apply all the ethics and morals that are expected of an auditor – and what your conscience tells you is the right thing to do. If you do that, you cannot go wrong. Even if you are challenged, you can always rise above water.’

‘Do your work professionally and ensure that you are technically sound. Then, whatever report you bring out, you command respect because people look at the source. If you are not properly qualified, that might cast some doubt.’

‘Remember that the sky is the limit. If you work hard, you will receive recognition.’