Leadership starts with yourself

Self-leadership is the key foundation for good leadership of organisations and teams. Sebastian Salicru looks at how to manage yourself in order to go on to great things 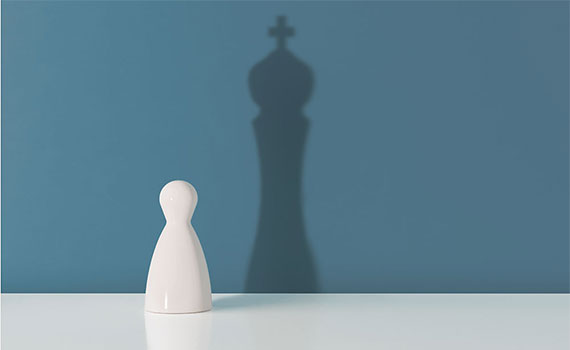 Any good leader – and any effective professional accountant come to that – needs to manage their own leadership skills. Self-leadership is the ability to achieve the direction and motivation to positively influence your own performance. It involves many skills, and there are a range of strategies and practices to build and sustain it.

In essence, self-leadership means developing the self-awareness and self-belief you need to take control of your life, set goals and make positive choices. Self-leadership is more about personal excellence and mastery than about having a view on leaders or leadership development. Here are some areas to work on in developing your own self-leadership qualities.

Self-esteem is the sense of self-worth and confidence in your abilities. An individual’s level of self-esteem is determined by the degree to which they accept themselves for who they are. This is why it is associated with terms such as self-respect, self-confidence, self-assurance, pride, dignity and morale.

High self-esteem is correlated with rationality, intuitiveness, creativity, flexibility, a willingness to admit and correct mistakes, cooperativeness and an ability to manage change.

The higher the self-esteem, the more honest and open the individual. People with high self-esteem believe in their thinking and have no fear of clarity or the truth; they make commitments, keep promises, deliver results, and challenge themselves with demanding goals.

Work to your strengths

American psychologist Donald Clifton was committed to helping people identify and utilise ‘their best’. He created a self-assessment tool called the Clifton StrengthsFinder. To date it has been taken by more than 15 million people around the world. Another character-strength assessment is the VIA Institute on Character’s survey, which you can take at bit.ly/CharacterStrength.

Most people think they know what they are good at. They are usually wrong. More often, people know what they are not good at – and even then they are more often wrong than right. However, it is more important to focus on developing strengths than on fixing weaknesses.

People who know and apply their strengths have greater success in life, so it is well worth identifying yours. Once you have completed your assessment, you should consider how to build on these unique strengths.

It is a myth that leaders are or should be well rounded. Tom Rath, co-author of Strengths Based Leadership: Great Leaders, Teams and Why People Follow, says that being well rounded simply means you are a jack-of-all-trades and master of none. You’re a generalist, not known for anything in particular. You don’t have a personal brand, trademark, uniqueness or differentiation, so you have no competitive advantage.

Great leaders cherish, practise and cultivate their talents and strengths. Think about what yours are (and get help to identify them if necessary); leaders who know their specialisms and prize them are usually willing to develop the unique strengths of others.

Some specialisms are eccentricities, and can easily be mistaken for weaknesses. But research shows leaders can promote creativity and innovation by leading through unconventional behaviour.

Kimberly Jaussi and Shelley Dionne at Binghamton University School of Management, New York, say that when leaders demonstrate unconventional or counterintuitive behaviour (such as standing on furniture, hanging ideas on clothes-lines or sticking out their tongues), they give the impression of being creative. Leaders who take risks by acting outside the norms demonstrate to the team that risk-taking is acceptable and encouraged.

Think of Steve Jobs, Richard Branson and Warren Buffet. Their eccentric leadership and passion for their work have left profound legacies. They had to break boundaries, challenge the status quo and, most importantly, leverage their unique strengths.

By being open about their eccentricities, they give permission to others to be creative, with their own behaviour showing what ‘outside the box’ looks like in the organisation.

Do the right thing

Character differentiates true leaders from pseudo-leaders, and it is character, as opposed to competencies, that is the foundation for leadership success.

Don’t mistake character for personality – they are two separate things. It is possible, for example, for someone to have a shy, nervous, shrinking personality yet also possess a character that makes them do positive things for many people. Others may have outgoing and friendly personalities but do things that disappoint, cheat or deceive others.

Your character defines your integrity; it is revealed in the moral and ethical choices you make. A firm adherence to a code of moral principles or values inspires trust.

Leaders with integrity live their principles and motivate their teams through ethical behaviour. Integrity creates conditions in which your teams and organisations will resist corruption and be more trusted and efficient. Integrity is a personal choice to hold yourself to consistent moral and ethical standards that are based on beliefs about the right thing to do.

Philosopher and motivational speaker Wayne Dyer declared: ‘Your reputation is in the hands of others. That’s what the reputation is. You can’t control that. The only thing you can control is your character.’

Reputation can be considered a component of your identity as defined by other people and is among the most treasured and powerful assets a leader can have. It is usually built over a long period, one deed at a time.

Leaders without character and integrity erode their reputations. Look at how Richard Nixon’s reputation plummeted following the Watergate scandal. As Buffett has said, it can take 20 years to build a reputation and just five minutes to ruin it. Think about that, and you’ll do things differently.

Having positive psychological capital means having the internal resources to deal with challenges at work. According to Fred Luthans, a management professor at the University of Nebraska-Lincoln, psychological capital consists of four components, which together are greater than the sum of their parts and are referred to by the acronym Hero.

A good example of how psychological capital relates to self-leadership is the story of Nelson Mandela. His 27 years of imprisonment didn’t compromise his resolution to unite his country. Analysing Mandela’s leadership style, Rene Van Wyk, an associate professor at the University of Johannesburg, concluded that his pursuit of a non-racial South Africa and fostering of political and economic rights for all through peaceful negotiation embodied psychological capital. She adds that Mandela viewed himself as an ordinary leader exposed to extraordinary circumstances, but used his psychological capital to conquer the most challenging political obstacles.

In a business context, a 2007 study by Luthans and others estimated that small increases in employees’ psychological capital could lead to large increases in return on investment.

These are just some of the valuable areas to consider as you develop your own self-leadership skills.

Sebastian Salicru is author of Leadership Results: How to Create Adaptive Leaders and High-Performing Organisations for an Uncertain World

"Most people think they know what they are good at. They are usually wrong"