Phil Baldwin ACCA, head of finance and operations, Albion in the Community 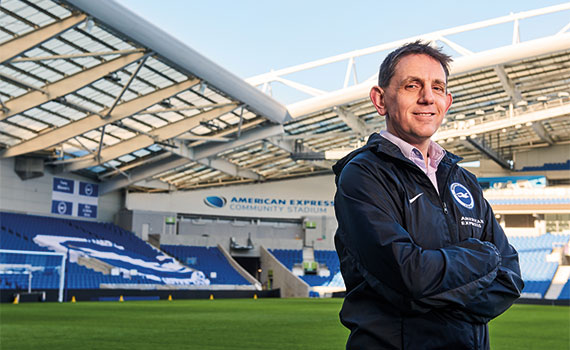 Launching the charity Albion in the Community (AITC) was, says Phil Baldwin ACCA, its head of finance and operations, ‘an expression of the football club’s commitment to being a positive influence on the community here in Sussex’.

Working out what that means can be tough, particularly for a Premier league club with a turnover of £140m, and a stadium that cost more than £100m to develop, just a short ride away from some of the most deprived areas in the south of England. So, what is the role of the football club and its charity in the local area?

Baldwin says the club’s owner Tony Bloom, a  businessman and a philanthropist, understands the important place a football club can have in society – something he shares with Martin Perry, a Brighton & Hove Albion director and AITC chair of trustees, who realised how football could transform lives when he worked on the Huddersfield Town stadium construction project, where classrooms were included in the build.

‘Both recognise the power football has to influence the lives of those living in the local community,’ says Baldwin. ‘When the stadium was first being developed, that sense of community was integral to everything being done. It was always going to be an asset for the community.’ Naming the ground the American Express Community Stadium was a signal of intent.

Baldwin helps set the strategic path for AITC, steers its governance and manages its financial affairs. He sums up his role as asking what the charity should do, how it should do it and how that activity relates to the club, the local community, local authorities and others in the third sector. ‘My first responsibility is to ensure the stability, resilience and financial longevity of the charity while ensuring the operating environment to deliver the impact we want within our myriad working relationships.’

A turnover of £3.5m a year and a headcount of 200 make the charity a significant force in Sussex. The positive impact it has is clear from a recent report that found AITC had directly contributed £28m in social value to the local community since the club’s promotion to the top flight; that works out as £8 of community benefit for every £1 invested in AITC via fundraising or grant applications.

AITC is keen to emphasise both its independence as a charity and its strong links to the football club. Those close links bring enormous pride and provide significant support. ‘There are many benefits of having such a close relationship to the football club, and the club benefits from it as well,’ says Baldwin. ‘We use the brand as leverage, and the club’s stock is enhanced through the work we do. The club releases assets to us, such as its brand, stadium and media reach. It’s a collaboration that means the football club and charity can change local lives for the better.’

Key challenges are communicating the scope of AITC’s work locally and raising money. ‘We are not completely funded by the club, although that is the perception. It also supports us in non-financial ways, which, if monetised, would be worth hundreds of thousands of pounds.’

Income also comes through grants and contracts from local authorities, and tapping into the purses and hearts of the public and the club’s 30,000 regular fans. ‘We’re converting that passion for the club into passion for the charity as well,’ he says.

In his five years in post, Baldwin has worked to stabilise the financial position. ‘Typically, grants have a lifespan of 12 months,’ he says. ‘We want a financial model where we control our income stream, rather than working under an unpredictable funding cycle.’

Creating diversified income streams – such as offering services to Sussex’s 600 schools and tapping into goodwill among local businesses – is reducing AITC’s vulnerability to income swings as well as reshaping and renewing its offer.

The club won promotion to the Premier League promised land for the start of the 2017/18 season, and Baldwin is clear that its success is central to AITC’s ability to leverage the brand. But the charity’s income is not intrinsically linked to Premier League status. ‘Our funding does not go up or down significantly as the football club goes up or down. We as a charity are able to withstand dropping down a division.’

The charity wants to be seen as much as an example of best practice in the third sector as the football club does on the pitch, so Baldwin and colleagues have put an enormous emphasis on good governance. ‘We have invested hugely in our organisation and are a well-run charity – which has been recognised by the British Standards Institute and the Premier League; in fact, we’ve helped develop a BSI kitemark for charity governance.’

That example of best practice extends to other areas of charity policy. Working with 40,000 people a year – many of them children and young adults – means safeguarding is a major focus. ‘We don’t want to just meet minimum standards; we want to set the benchmark,’ says Baldwin. ‘That is not only right, it also minimises organisational risk.’

Central to everything at AITC is a desire for positive, sustained impact on the communities in which it works. ‘If we commit to our community for the long term,’ explains Baldwin, ‘we need to be structured in a way that is resilient.’

So while the club crests the wave at present, AITC will continue to score – whatever the results on the pitch.

After a degree in economics and a job editing Financial Times publications, including a European investors’ guide to football, Baldwin moved into the third sector before joining AITC.

He gained an AAT qualification, then self-financed his ACCA tuition, studying in the evening while his two young children were asleep, and using online tutors towards the end of the training. ‘It was hard work and took a lot of commitment, but it was hugely fulfilling,’ he says. ‘The ACCA Qualification gave a sense of purpose and a real goal to achieve. I now wonder how I did it.

‘ACCA not only opens up career possibilities, it presents a challenge, and there’s a sense of pride in all that.’

AITC’s programme
AITC is a health, education and wellbeing charity that encourages physical activity through, for example:

a health programme at the stadium, which offers support to overweight fans or local men in need of nutritional advice

working with local groups on healthcare messages – for example, around the early-stage symptoms of cancer – using the appeal of the club to access hard-to-reach demographics

providing football sessions to people with disabilities and disability awareness training to schools and businesses.