With Pakistan’s supreme audit institution facing a vast and changing workload, auditor general Javaid Jehangir is turning to automation and a partnership with ACCA 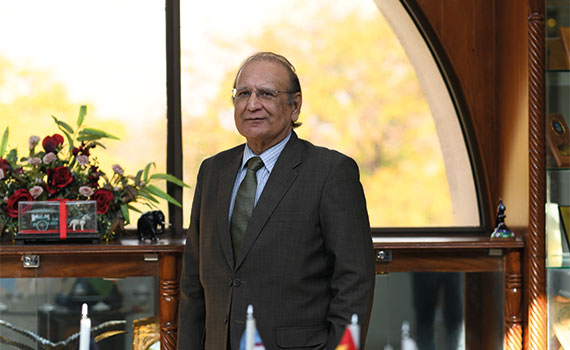 As auditor general of Pakistan, Javaid Jehangir heads up the country’s supreme audit institution. Continued capacity building and greater automation are high on his agenda.

‘The auditor general of Pakistan has a vital role to play in the overall financial management of the country,’ he says. ‘Through his feedback to the legislature, he informs the public at large how their funds are being spent and whether government functionaries are delivering the right type of services and goods to the public.’

Around 47,000 entities are audited by his department. ‘We have a risk-based approach to our work, so we audit the high-risk entities regularly,’ he says. ‘We try to complete our cycle of covering all entities over a period of five or six years.’

Given the scale of its work, the auditor general’s office has been engaged in building audit capacity for some time. ‘Our capacity as the state audit institution has come a long way in 10 years,’ Jehangir says. ‘We have developed our audit methodologies and approaches and aligned them to the best international practices.’

Audit manuals, for example, are aligned to the guidelines of the International Organization of Supreme Audit Institutions (INTOSAI), a body covering the supreme audit institutions of 191 states, the European Court of Auditors and five associate members. ‘We carry out risk assessments of the entities we audit so that we remain focused on the real issues rather than spending our resources on insignificant things,’ Jehangir says. ‘We also know that the government working environment is moving rapidly towards automation, so we are working hard to develop skills in IT audits.’

In fact, over the next two years, Jehangir aims to automate ‘the entire audit process’. He says: ‘We have already developed quite a number of people in the field of IT. All our accounts are automated, so we audit the accounts online.’ Data is downloaded and software conducts different types of analysis. ‘We have a lot of awareness and skill in terms of IT operations in the department,’ Jehangir says. ‘We have given laptops to our entire audit field staff, and they now process their audit reports on the computers. But at the same time we keep updating their knowledge base in the field of IT. We also need to develop a good core team of IT auditors. Right now we have a few people in the organisation with skill in IT auditing, but we need to expand that core group.’

The department is aware of the need to update skills in relation to other specialist areas too, such as the UN’s Sustainable Development Goals, climate change, energy and water usage, along with infrastructure, in the light of the huge investment being made in developing the China-Pakistan Economic Corridor, part of China’s Belt and Road initiative. ‘To cater for the requirements of such audits, we need to update our skills and knowledge, so we are interacting with different professional bodies and international donors,’ Jehangir says.

One of the five prioritised goals in the department’s 2015–19 strategic plan is to increase collaboration and interaction with internal and external stakeholders, including professional bodies such as ACCA. ‘We want to share information and our knowledge and experience with them, and in return we want to draw on their experiences in the area of public sector auditing and financial management,’ Jehangir explains. ‘In that collaboration and interaction, wherever it’s possible, we can help each other in developing our capabilities in different areas of the profession. In that context I decided we should collaborate with ACCA.’

At the time of the interview, the auditor general and ACCA were evaluating a memorandum of understanding for enhanced collaboration in a number of areas. Jehangir is looking for a ‘mutually win-win situation for both sides’.

Amid the changing demands made on public auditors, one requirement remains constant – the need to be on the look-out for corruption. ‘We are a very corruption-averse organisation,’ Jehangir says. ‘We operate a zero tolerance approach. We supervise our audit staff in the field and if there is any complaint, we carry out an enquiry and try to fix the issue, as well as sanction the person responsible. So far as corruption on the national level is concerned, we keep a firm watch and monitor the situation through media and other reports and documents, putting red flags on issues where there are suspicions of mismanagement or corruption. We include all these things in our audit plan.’ If audit field staff find suspicious material or significant issues in the course of their work, these are included in the audit reports presented to the National Assembly’s public accounts committee.

Route to the top

Jehangir’s route to the top audit role in Pakistan began after university, where he studied English literature. ‘I appeared for the civil service exam and the rest is history,’ he says. ‘I had a long career in the Pakistan Audit and Accounts Service and after completing that I was appointed auditor general.’ As well as public sector auditing, he has been involved in some weighty tasks, such as the formulation of public financial management policy, the implementation of policies and reforms, the strengthening of governance and accountability, change management and capacity building.

He has found most of his career satisfying, but some roles had a particular resonance, such as a secondment to a medical institution as director of finance. ‘That was really fulfilling for me because through your finance policies and practices, the streamlining and simplification of procedures and systems, you could help the patients there,’ he says. ‘Their misery could be mitigated to a certain extent.’

One of his most demanding jobs was when he served as an adviser on performance audit to the auditor general of Botswana. ‘That was challenging for me because I had to develop the system and the skill levels of their staff in the field of performance auditing,’ he says. ‘But I was able to achieve that and developed the system that is still working there now.’

All these experiences have helped to inform his activities as auditor general, a role he certainly enjoys. ‘When you explain financial management issues during the public accounts committee meetings, and give your views to the legislators and policymakers there, then you are really contributing towards improving the overall system,’ he says. ‘Based on these discussions, directives are issued by the National Assembly to different government ministries to streamline their systems. That is encouraging and fulfilling.’

The auditor general’s tenure is for a period of four years. Jehangir has a couple of key aims by which he will judge his own success in the role. First comes the automation of audit processes, given adequate resources. ‘Second, I am trying to give direction in the organisation that we should prepare ourselves for emerging challenges,’ he says. ‘The type of work that historically we have been doing may not be very effective in years to come, so we have to change our approach. It’s an issue of change management in the organisation. We have to be responsive to the needs of our stakeholders and to the type of analysis and feedback they want from us.’

"We try to complete our cycle of covering all 47,000 entities over five or six years"

Javaid Jehangir took up his role as auditor general of Pakistan in August 2017, having served in the Pakistan Audit and Accounts Service (PAAS) for more than 35 years in a variety of accounting, auditing and financial management roles. During his time at PAAS, he conducted various national and international field audit assignments and completed a number of foreign assignments. He is also secretary general of ECOSAI (Economic Co-operation Organization Supreme Audit Institutions) – the regional forum for South and Central Asia.

The auditor general’s organisation is the prime institution in Pakistan for ensuring public accountability and fiscal transparency in governmental operations. It is expected to bring about improvements in the financial discipline and internal control environment of executive departments, so minimising the risk of waste and fraud.

The department produces certification audit reports on government accounts, annual ‘compliance with authority’ reports on how public funds have been spent, an increasing number of performance audit reports, as well as other audit reports on areas such as disaster management, the environment and the social safety net.

The auditor general and his office have a strong relationship with ACCA. For example, ACCA has a representative on the department’s audit policy board, alongside other external stakeholders such as the national financial regulator, the tax evasion and money laundering investigator, and the state bank.

An ACCA representative is helping to define the roadmap for Pakistan’s move to accruals-based International Public Sector Accounting Standards (IPSAS). The country has so far adopted standards aligned to cash-based IPSAS, with ACCA delivering IPSAS training for 200 staff in the auditor general’s department.

In an ongoing major project, ACCA is working with the auditor general’s office and the World Bank to develop a public financial management professional accreditation programme for Pakistan. ACCA is designing and developing the programme for three provincial governments. The process has involved more than 130 interviews and workshops with stakeholders across the public financial management landscape, and engagements with the office of the auditor general and the controller general of accounts.

Phase 1 of this project, which involved setting out the high-level design of the qualification, including levels, syllabus, entry requirements, exemption strategy, progression rules, learning strategy, awards, accreditation arrangements and examination/assessment strategy, has been completed. Phase 2, which involves the detailed development of learning materials, assessments and the student journey, as well as digitising content and running a pilot, is scheduled for completion by June 2020.