While Dublin remains a magnet for businesses, entrepreneurs are being encouraged to set up in the regions in order to create a more balanced economy 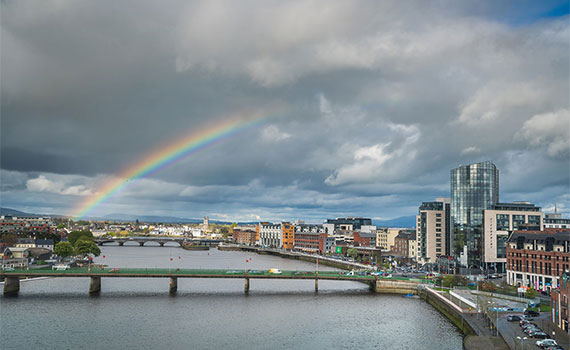 Ireland’s 250,000 small and medium-sized companies (SMEs) account for 50% of national business turnover, according to the Central Statistics Office. These are serviced by 31 local enterprise offices across the country managed by Enterprise Ireland. As domestic and office rents in the capital continue to soar, there are renewed efforts to develop opportunities for startups to base themselves outside Dublin in areas where costs can be significantly lower and there is a growing pool of facilities.

As an example, NUI Galway, the largest education institution in the west of Ireland, is planning to open a new Centre for Entrepreneurial Growth and Scaling as part of efforts to widen the base of activity. Development of the regions is a key theme in the government’s National Planning Framework and National Development Plan (part of the Project Ireland 2040 programme) published in February 2018. Meanwhile, a recently agreed €3bn rural broadband plan aims to make working from regional locations more viable.

Speaking at a seminar at the National University of Ireland in late 2019, senator Pádraig Ó Céidigh said government has a key role to play in encouraging businesses to look beyond the capital, especially by better connecting the dots between various development schemes for entrepreneurs. There are 170 different entrepreneurship promotion schemes operated by 27 different government agencies and departments, noted the senator, himself a Galway-based entrepreneur.

Ó’Céidigh helped write a recent Senate report on SMEs in Ireland that recommends creating regional networks of businesses that can support each other in supply chains, and identifying specific areas to build business clusters, where companies with synergies can group together.

The report also suggests lowering Ireland’s capital gains tax, and that banks ease demands for personal guarantees on loans. Nicola Quinn, tax partner at PwC, based in Cork, says accountants can help entrepreneurs with more than the myriad of tax and accounting regulations they face as a business grows. She likes regional events where businesses can gather, enabling her and colleagues to share insights while allowing local businesses to network with each other. ‘Collaboration and sharing are really important in the regions,’ she says. Her practice works with local enterprise boards, chambers of commerce and other local associations to hold such meetings.

An OECD report on SME and entrepreneurship policy in Ireland finds Ireland needs to increase the rate of its startups, and improve its new and smaller firms’ productivity, including digitising companies’ business processes and aiding their participation in international markets. The managerial skills and ‘financial literacy’ of entrepreneurs need improving, the report notes, while commending how Irish government policy encourages innovation and has opened up public procurement markets to SMEs.

Entrepreneurship in the western region remains limited, however, says Damian Prendergast, tax consultant and accountant at County Mayo-based Claremorris. ‘No, I don’t believe entrepreneurship is up in Mayo. A combination of a stagnant local economy, higher operational costs for business and a lack of understanding of the resources available are to blame in my opinion, as well as the effect of Brexit,’ which Prendergast says has had a chilling effect on taking risks. He adds that much of his work involves guiding clients through taxes and incentives, notably the Start-Up Relief for Entrepreneurs (SURE) that provides relief on income tax paid in previous years, although he says ‘it very much favours higher earners’.

Prendergast wants capital gains tax revised for entrepreneurs who pay 10% on the first €1m, but 33% after that, with Quinn noting that a similar relief in the UK applies 10% to the first £10m of gains. ‘Entrepreneurs take risks and create jobs – we need to reward entrepreneurs and entrepreneurship better in Ireland,’ he says.

He was more ambivalent about the potential for state facilities, such as local enterprise offices, to boost rural entrepreneurship. Prendergast says that 20 years of experience suggests that, despite good intentions, many clients report that these offices tie up practical assistance with ‘too much red tape’.

Ireland also needs to become more attractive to foreign entrepreneurs wanting to work in the regions, suggests Limerick-based senator Kieran O’Donnell, an accountant who contributed to the Senate report.

Ireland’s Employment Investment Incentive (EII) tax benefits can help, but this relief has less generous conditions and restrictions that limit its attractiveness compared to similar benefits offered in the UK, says Jonathan Levie, recently appointed professor of entrepreneurship and regional development at the JE Cairnes School of Business & Economics at NUI Galway. The EII allows an individual investor to obtain income tax relief on investments for shares in certain companies up to a maximum of €150,000 per annum, but this compares poorly with the £1m offered in Britain.

Tax reform is more efficient than state agency encouragement for Levie, saying it can better generate ‘more devolved funding opportunities’ for entrepreneurs through regional angel investors. Ireland currently has a relatively unattractive tax regime for business angel investors compared with the UK, which Levie highlights as significant, because angel investors tend to invest in their own region and provide a local source of advice, contacts and expertise. Ireland currently has less than half as many business angel syndicates as Scotland (10 compared with 22), with its similar population – a better Scottish tax regime is the reason, he says.

Tax reform would release a ‘wall of money’, argues Olivia Lynch, partner at KPMG. She believes that while the Irish tax system is well geared to draw investment from multinationals, it needs to better encourage home-grown firms.

As for accountants advising business angels, ‘they will usually be better placed than their accountants to decide whether an idea is worth investing in or not’, says Quinn. ‘Where an accountant’s advice is important is in assessing the numbers and the potential financial return of the investment. We can advise on the structure of the investment and whether that is by loan or share capital. We can also review the reliefs available to see if the investment might qualify for tax relief.’