Siobhan Pandya FCCA has switched course from oil giant Shell to skincare and cosmetics company Mary Kay, but remains driven by a work ethic she attributes to her mother 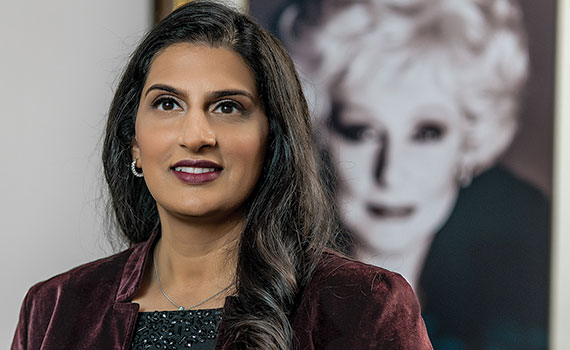 Few vehicles are as recognisable on US roads as the Mary Kay pink Cadillac. Drive one of those and it shouts your success at the skincare and cosmetics company. It is also very much a symbol of a successful enterprise founded by a woman, for women.

Now one of the key people responsible for steering the future success of Mary Kay is Siobhan Pandya. In April 2016 she joined the private, family-owned, direct sales company – US$4bn turnover in 35 countries – as director of continuous improvement and lean, making the switch from the oil sector, having worked all her career until then for multinational Shell. And yes, to some extent she has noticed more women in senior positions since changing job.

‘It definitely depends on the sector you are in,’ Pandya says. ‘Historically, many of the leadership roles in Shell were held by males; however, in my last few years, I noticed a shift towards greater diversity and inclusiveness. I did not feel any discrimination as a woman at Shell. In fact, I was always encouraged by my managers to strive for leadership positions. Now at Mary Kay, I am excited to see so many strong female role models in leadership positions.’

Whatever the male/female balance at a senior level, Pandya is keen to emphasise the strengths of the individual rather than their gender. She describes herself as ‘lucky’ in terms of the roles she has had, but her managers have always noted her work ethic, something she suggests has helped her career.

‘It is about working as hard as possible and building strong relationships with every level of the organisation. When I make a commitment, I meet the required level and, most times, strive to exceed it. That is now what is expected of me and I am respected for that.’

Pandya links this desire to achieve to her personal life. Her father died when she was 18 months old, and she and her brother were brought up in Glasgow in the UK by her mother. ‘My work ethic comes from the desire and the motivation to be successful for her, to repay all she has done for us. I want her to be proud and to realise that what she gave up for her kids was a worthwhile sacrifice.’

Despite all the people Pandya has worked with and met over the years, her mother remains her top role model. ‘She taught me that with inner strength and a focus on the goal, you can achieve whatever you want.’ This extends to her two sons. ‘What my two sons settle down to do is up to them, but at their core they need to have a good education, work hard and be good human beings.’

The work ethic instilled in her by her mother has allowed Pandya to achieve a successful work/life balance. ‘The way I delivered meant I created the required confidence in my leaders.’ This meant that when she moved from the UK to Texas with Shell, she was able to be home-based in Dallas as opposed to Houston, the US headquarters of Shell, and still succeed in her work responsibilities.

For Pandya, leadership is about understanding the strategic priorities of the organisation and connecting those to every level, so that each employee knows the value they bring to the strategy and to the customer.

Pandya sees two distinct elements to any job: the core discipline (in her case, continuous improvement) and a broader spectrum of thinking and experience.

That second element, for her, has included greater involvement with ACCA, as well as becoming immersed in other areas of her work. She says: ‘My advice to women is not to limit themselves to the role that they are in. It is essential to try and think outside the box.’

Her stepping stone to her current role was joining Shell’s continuous improvement team, which examined the various parts of the business – aviation, commercial fuels, marine, bitumen – and looked at ways to increase revenue, reduce costs and/or improve working capital while instilling a culture of aiming to do things better every day.

Based on this experience, Pandya joined Mary Kay. The company was created because of the eponymous founder’s frustration at being passed over for promotion in favour of men.

The women who sell the skincare and cosmetics choose their own schedules and targets, giving them flexibility and control. Pandya’s strategic role in the company is to bring in a continuous improvement culture. ‘What does a good day look like and how can [our people] do better?’

Her finance experience gives her leverage across both finance and manufacturing: ‘My leader is always saying, “With your finance hat on, what do you think of…?”’ More importantly for her, she is in a company that is able to reach millions of women worldwide.

‘As a woman, what more could I ask?’ she says. ‘It is helping me teach my two children the importance of being a successful woman, and of helping other women.

‘As you climb up the ladder, bring other women with you.’

On leadership for ACCA

When Pandya joined Shell’s newly opened Glasgow shared service centre it employed 300-400 people, many of them undertaking the ACCA Qualification. She noticed that those studying lacked support – ‘for instance, specific internal training courses or clear guidelines on gaining the right work experience to combine with the exam work’.

Working with ACCA, she helped create a link between the general ACCA guidelines and how that worked specifically within Shell. The thinking behind this created a template that Shell and ACCA used across their organisations.

The ACCA Qualification was attractive to Pandya because of its global nature. Now that she is at Mary Kay, she is talking to ACCA about closer involvement in the direct-selling industry. ‘I can marry up all my worlds.’

When she moved to Texas, she sought out ACCA in Dallas, becoming the chapter head in 2007. She is now chair of ACCA USA, responsible for supporting approximately 4,000 US students and members. She works with the office in New York on strategy, and on US-specific ACCA challenges. ‘My biggest role is to show my passion and advocacy, and to create that in others.’