With the EU facing increasingly strident calls to change the rules on the taxation of digital economy giants, what are the implications of a single digital market for Ireland? 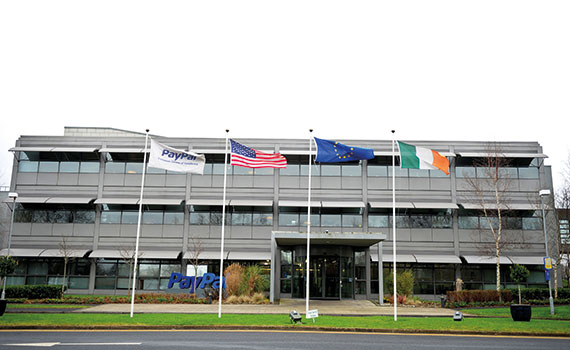 If Brexit did not pose a sufficiently large external threat to the Irish economy, another potentially major disruption is in the offing, via planned changes to European Union taxation rules on e-commerce.

Faced with the politically toxic reality that major US high-tech multinationals such as Google, Facebook and PayPal pay far less tax than might be expected given their huge profit, the EU has been considering reforms to increase revenues from these giants.

‘Digital single market’ proposals by the European Commission look to shift EU taxation law towards ensuring e-commerce companies pay taxes where they earn money, rather than where their EU branches are registered.

And that is potentially a big problem for Ireland. It has a minimal corporate tax rate, the lowest in the Organisation for Economic Co-operation and Development (OECD) group of 35 rich countries. In fact, 13 of Ireland’s top 100 companies pay an effective rate of tax of just 1%, according to the latest Irish Comptroller and Auditor General report.

Of course, if the company concerned is large enough, this still means big tax euros for Ireland, and investment associated with offices located in the country. But this policy annoys other governments, notably the EU’s biggest players, Germany and France, who want digital majors to pay more tax in their larger markets, a move which threatens to divert revenue away from Ireland.

The Commission’s proposal for a ‘fair and efficient tax system in the EU for the digital single market’ has been the result. It is not a simple proposal, however. In a nod to the complexity of deciding how and where internet businesses should be taxed, the Commission suggests taking ‘immediate, supplementary and short-term measures’ to correct current fiscal imbalances until the EU agrees ‘revised permanent establishment rules for allocating the profits of large multinational groups’. Creating a digital single market ‘could contribute €415bn per year to Europe’s economy, create jobs and transform our public services’, according to the Commission’s proposals.

But the view from Dublin is far less rosy. The Irish media has quoted sources close to finance minister Paschal Donohoe saying he currently spends ‘between one-quarter and one-third of his time’ dealing with this e-commerce issue.

Ireland is certainly vulnerable. Firstly, under a tax regime for a digital single market that insisted on linking the location of tax payments with profit generation, Ireland would become much less attractive as a registration and management base for US multinationals and would lose tax revenue. Secondly, 37% of tax receipts come from just 10 corporations and 70% from the top 100. Thirdly, 70% of corporate tax in Ireland is from just three sectors: financial and insurance activities; manufacturing; and information and communications – so e-commerce is key to the tax base.

Officially, the Ministry of Finance recognises the need for further international work on this area to ensure that tax is paid by companies where value is created. ‘Ireland remains convinced that a global approach to tax reform is preferable, given the global nature of international business,’ said Jacqui Coleman, a ministry spokesperson. But she called on the Commission to slow down. The OECD is already carrying out research into taxing digital business, with a report due in spring 2018. ‘Ireland believes it would be premature to take any action at EU level without considering the analysis in the upcoming OECD report,’ says Coleman.

Susan Kilty, tax partner at PwC in Dublin, agrees. ‘We are a long way away from knowing the final picture’ when it comes to taxing the digital economy. She suggests ‘taking a step back and looking at the bigger picture’, since all over the world companies are ‘investing massively in IT and HR to deal with digitalisation and technologies such as artificial intelligence and blockchain’. This is making it increasingly difficult to separate the real economy from the digital one: ‘Policymakers need to understand what drives value in the different business models,’ she says. ‘The consumption part is not all of it.’ Quick fixes, such as the suggested withholding tax on e-commerce (see boxout), for example, ‘aim only at revenue and do not deal with taxing the underlying value or the margin’. Kilty feels such measures would mainly ‘harm the small and mid-cap companies that governments want to protect’.

In any case, unilateral EU moves should be avoided, says Kilty. Globally, the motion is to ‘tax profits where the substance is…and multinationals have a lot of substance in Ireland’, she adds. Will US high-tech ‘fat cats’ with European headquarters in Ireland continue to pay as little as 1% in tax? ‘Change is coming,’ says Kilty. ‘But not only in Ireland. US, OECD, EU – we should all move together.’

According to the US Bureau of Economic Analysis, US digital giants in 2014 made a profit of €96bn in Ireland and should have paid about €9bn in tax, if the tax were based on where the value is created. In fact they paid about €3.25bn. As an emergency exit from the conundrum of complying with the forthcoming EU rules and remaining attractive for US multinationals, the Irish economist David McWilliams recommends ‘reinventing the relationship between the state and the multinationals’. Instead of paying tax, he suggests, Google, Apple and the like should give Ireland company shares to create a sovereign wealth fund.

"Ireland remains convinced that a global approach to tax reform is preferable, given the global nature of international business"

The European Commission opened its public consultation on the taxation of internet companies in September 2017.

Its proposals have two steps. In the long term, it wants a comprehensive law that involves ‘revised permanent establishment rules’ allocating large multinational group profits to ‘better reflect where the value is created’.

Until that is agreed, possible short fixes could be imposed. These might include:

An equalisation tax on turnover of digitalised companies, taxing all untaxed or insufficiently taxed income generated from all internet-based business activities

A levy on revenues generated from providing digital services or advertising, applied to all transactions concluded remotely with in-country customers where a non-resident entity has a significant economic presence.