Africa is awash with free trade blocs, yet its exporters typically ignore their own continent in favour of others. What, then, is holding back intra-regional trade? 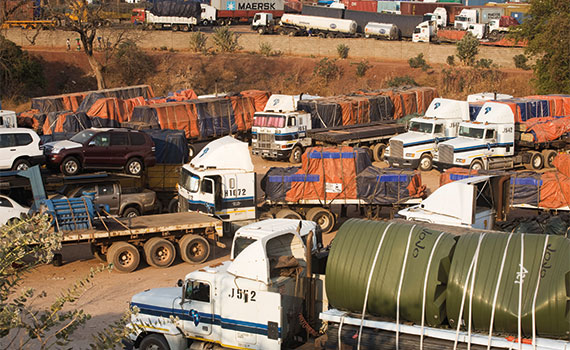 On paper, African nations show an almost unrivalled zeal for free trade. The continent has a patchwork of 17 free trade blocs. The largest, the Tripartite Free Trade Area of 2015, has 27 member countries, 650 million people and a combined GDP of more than US$1.5trn. And a still more ambitious deal is in the works in the form of a Continental Free Trade Area (CFTA) to allow the free movement of goods, services and people across all 55 of Africa’s nations, with a total GDP of US$3.5 trillion.

Yet the disconnect between theory and reality is striking, especially compared to other major regions. In Europe just over 70% of trade is between the region’s nations, versus 51% in Asia and 19% in Latin America. In Africa, on the other hand, intraregional trade accounts for just 15% of the total.

‘Levels of trade between African countries remain disappointingly low,’ says Mark Pearson, an economist and consultant to African governments and businesses for 35 years, and an associate of the Brenthurst Foundation. ‘Sadly, the lattice of free trade deals are not doing what they say on the labels.’

So what is the economic cost of these low levels of trade, and what can be done to foster commerce on the continent?

The advantages of freer trade would be numerous and powerful, argues Pearson. ‘In such a fragmented continent, you could get some real economies of scale making large and efficient businesses more viable.’

In terms of trade relations, Africa is decades behind the mature economies, according to Wendwesson Shewarega, an Ethiopian lawyer, whose practice focuses on trade, investment and taxation. ‘A nation usually can’t be good at every stage in the process, hence the need for trade with neighbours who may have an advantage in one element of production,’ he says. ‘Despite this, Ethiopia has been trying – unsuccessfully – to build a world-beating textile industry that dominates every part of the value chain from growing cotton to producing ﬁnished items of clothing. That is just not the way global supply chains work any more.’

To compete properly, outside Africa’s traditional commodity businesses, the continent needs to break down barriers. And that raises the question of why existing deals don’t appear to do so.

The first issue is that existing trade deals are not always properly implemented. As a result a host of tariff and non-tariff barriers remain in place. On average, an African company selling goods on the continent still faces a tariff of 8.7% versus 2.5% when selling outside Africa, according to data from the UN Conference on Trade and Development (UNCTAD). And that is just an average.

Like Swiss cheese, many existing deals are full of holes. They include onerous local content rules, which insist that the bulk of the value added in any product come from within the zone to qualify for lower tariffs. ‘It is not uncommon for zones to require 65% of the value added to come internally,’ says Pearson. ‘That is just not how global manufacturing works these days. Only about 4% of the value of the iPhone, for example, is added in China, with components coming from over 200 suppliers from all over the world. The African concept of trade is 40 years behind the curve.’

The first step, then, in fostering African trade is to forge deals that focus on substance. Even though the CFTA is making progress, experts are concerned there will too many holes in the deal. ‘The danger is that there will be a lot of free trade and integrationist window dressing, without enough substance to make a real difference,’ says Peter Draper, managing director of Tutwa Consulting Group, which specialises in policy and regulatory analysis in emerging markets. ‘There is still a lot of protectionist sentiment that needs to be overcome, with countries afraid that true opening will harm domestic industries.’

Shewarega believes there is a misperception at the heart of African trade. ‘The main misguided notion is that since African nations produce similar goods, there is little to be gained from trade,’ he explains. ‘Instead, there is a much greater focus on trade with China or the European Union. In fact, the countries bordering Ethiopia do have some unique manufacturing output.’

Overcoming these protectionist sentiments is key, but there are also more practical solutions that could move Africa in the right direction. They include taxation, behind-the-border barriers, and transport and logistics.

One reason so many countries are reluctant to reduce taxes on trade is that they are a valuable source of cash. ‘This revenue would need to be replaced by something,’ says Shewarega. ‘I would estimate that more than 40% of government revenue for Ethiopia, for example, comes from import levies of some kind. That is far from easy to give up. Since tax collection has been weak in many African states, trade liberalisation is really linked to the progress African governments can make in extracting resources from other sources – in particular personal income tax and corporate taxation.’

This is turn requires vibrant economies, well-paid employees and successful businesses that can afford to shoulder more of the burden. ‘This is not an easy circle to square, but it can be done eventually,’ says Shewarega.

Formal tariffs are only part of the issue. ‘If you move goods within Nigeria, for example, it is possible to encounter 50 road blocks, and at each of these you are required to pay an informal tax,’ Draper says. Here the solution is improved law and order enforcement – a persistent challenge for less developed nations.

A second focus of African trade integration needs to be the dismantlement of behind-the-border tariffs – differing standards that impede commerce – of which there are a multiplicity. Shewarega recounts a recent example of a shipment of sugar from Ethiopia that was turned back at the Kenyan border because the truck did not conform to Kenyan standards.

Border posts are often also understaffed, resulting in delays – which can sharply increase the cost of distribution. ‘Every day a shipment waits at the border to be processed adds hundreds of dollars to the cost,’ says Draper. ‘One solution, though far from an easy one, is to beef up customs authorities to enable goods to ﬂow faster. This is crucial in a world of just-in-time delivery, where factories expect a reliable ﬂow of supplies.’

Another primary concern for traders is infrastructure. ‘The weakness of the road and rail networks helps explain why it can be cheaper to ship a container from China to Djibouti than from Ethiopia to nearby Uganda,’ says Shewarega. ‘Often the main issue is not so much the road or rail networks within a country – which are quite good in the case of Ethiopia – but rather the links connecting nations. These are still very weak.’

Of course, sorting this problem out is easier said than done. Still, help has come in the form of infrastructure loans from the World Bank, other multilateral lenders, and increasingly from the Chinese government. The African Development Bank has handed out more than US$1bn in the past two years with the explicit aim of boosting intra-African trade.

So while there is no silver bullet, Africa’s low level of intra-regional trade can be cranked up. ‘Many African leaders are aware of just how important this could be in boosting regional prosperity,’ says Shewarega. ‘This is a problem that will be solved over years and not weeks. But it can be achieved.’

"It is not uncommon for a trade zone to require 65% of the value added to come from that zone. That is just not how global manufacturing works these days"

ECOWAS: The Economic Community of West African States was established in 1975, and has three official languages – French, English and Portuguese.

COMESA: Formed in 1994, the Common Market for Eastern and Southern Africa has 19 member states and stretches from Libya to Swaziland.

SACU: The Southern African Customs Union was set up in 1910. It covers South Africa, Botswana, Lesotho, Namibia and Swaziland.

TFTA: Signed in 2015, the Tripartite Free Trade Area includes 27 countries from Egypt to South Africa, with a combined population of 650 million and a total GDP of more than $1.5 trillion.