It turns out that working with cuddly toys is no child’s play. It involves innovative thinking and complex business models, as Build-A-Bear FD Christian Cook FCCA explains 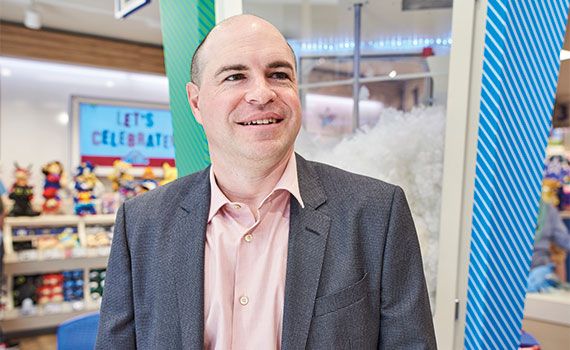 Build-A-Bear’s selling point is that customers can build the toy; the retailer is also helping build the career of its finance director. When Christian Cook FCCA joined Build-A-Bear in 2015 as finance director, UK and Europe, the parent company was implementing a new strategy following the hiring of the new group CEO in 2013.

‘I was interested in being part of the changes from a European perspective,’ says Cook, ‘bringing my retail experience to a US-owned business.’ The job also appealed because of the requirement for broad shoulders. ‘My role is greater than that of a typical FD,’ he says. ‘For instance, it includes working with my managing director on running European operations.’

Responsibility also extends to looking after real estate and evaluating different opportunities to grow. For example, the company is introducing the concept of concourse units; these are mini-outlets located in the middle of the shopping mall rather than being a traditional store: same footfall, lower property cost.

In the last year, Cook has helped to open three stores within Fenwick, the department store chain. And he has also worked on opening a store in the Shanghai Disney Resort, a task he took on within six months of his arrival at Build-A-Bear, supporting finance, HR, merchandise and operation.

Key performance indicators (KPIs) for Cook are sales and margins. Salaries are the largest variable cost, so he keeps a close eye on payroll. The biggest fixed cost is property. In terms of sales, ‘we look weekly at the number of toys’ skins and attachments sold.’

The company is currently rolling out a new store format – termed Discovery Store – colourful, with a clear walk-through of the bear-building stages. And now, near the entrance of the Bluewater store in Kent where the interview takes place, in pride of place is a machine that churns the filling, like oversized candyfloss, that the ‘bear builders’ use to stuff the toys. As well as store upgrades in a bid to broaden its appeal, the company has expanded its range through licensed products.

Cook spends time talking to the US agreeing budgets for the year, discussing the quarterly forecasts and monthly sales plans, as well as formulating longer term strategic plans. He also works with the US-based departments such as legal, IT and systems, tax and merchandising. ‘I provide a UK perspective for areas they need to look at, and we work out how best to get the required work done.’

The company recognises cultural differences, preferences and habits between consumers in different markets. ‘In the US the stores are bigger and cheaper than in the UK,’ says Cook. ‘UK consumers are ahead in embracing online shopping, and the UK has embraced contactless technology; in the US chip-and-pin is still not standard. We highlight those nuances and feed them into planning.’

However, some elements are standard: the look of the stores and the product lines across continents and the release of a blockbuster animation movie with its licensed character will spark interest in the stores.

Globally the company is seeing evidence that the traditional shopping-mall-based traffic is declining. ‘Consumers’ shopping habits are evolving, doing more online including buying on mobile devices,’ Cook says. The company has responded with a new website, launched at the end of September 2017, offering exclusive online licensed deals.

Cook has also played a part in the company-wide introduction of an ERP system, which is due to go live this month. Other systems – from the stores and merchandising – feed seamlessly into the new ERP, data is secured faster and the manual workload should reduce.

‘The new system is better in finding information to act on rather than data to interpret,’ says Cook. ‘A key for the finance team is that you are a support function for the rest of the team,’ he says. ‘I need to make it easy for non-finance people to know where to look and help them with the actions they need to take.’

The idea of supporting the business is crucial to Cook. ‘I wanted to take all my years of retail experience and move it up a notch.’ For him, it is a given that financial control and reporting is robust. ‘You make the difference strengthening the connection between the finance and non-finance parts of the business, working with the rest of the business in delivering the strategy,’ he says. ‘Both the finance and the business goals and objectives have to be delivered.’

That includes driving performance, efficiencies and operations. ‘The grounding you have with the ACCA Qualification gives you that ability to engage with the business,’ Cook says. ‘Besides accounting, there is more call now than ever for the other skills that ACCA gives you – law, technology, business insight, project planning.’

Although there are no definitive timelines, ultimately Cook has his sights set on an MD or CEO role. ‘I am more than a numbers person,’ he says. ‘People describe me as not a typical accountant; I like being with the business, understanding and contributing to what goes on behind the numbers.’

To really get to know the business accountants in retail should, Cook says, get out of the office and into the stores. He’s stuffed the bears at Build-A-Bear and has worked the shop floor for all his employers. He encourages his team to go out and do the same, especially over busy Christmas periods.

Reflecting on his two decades’ experience, he says: ‘The simplest thing about retail is that if you have the right product at the price that customers are prepared to pay, then they’ll buy it. And the best retailers differentiate through their customer service. That includes us and our experience.’

2006
The year Build-A-Bear arrived in the UK, following the purchase of two businesses, Amsbra and the Bear Factory, part of iconic toy store Hamleys.

400 stores in six countries
In US, Canada, Denmark, Ireland, Puerto Rico and China. There are also franchise stores in areas in Africa and elsewhere in Asia, Europe, Middle East and Mexico.