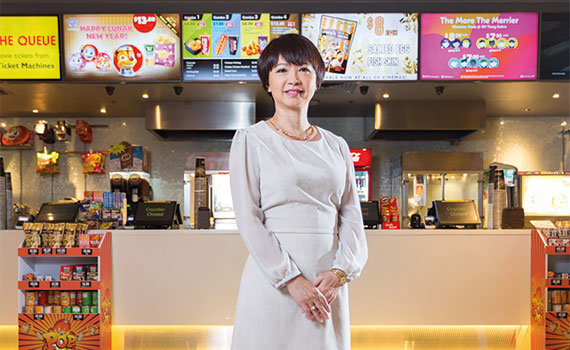 This article was first published in the March 2018 Singapore edition of Accounting and Business magazine.

Clara Cheo, CEO of Golden Village (GV) Multiplex in Singapore, has a job that many would be envious of. She gets to watch movies before anyone else, and is responsible for keeping the cinema-going experience exciting for patrons.

Underneath the glitz and glamour of the movie and cinema industry, however, Cheo faces the real task of maintaining GV’s place as Singapore’s number-one multiplex operator. She has to ensure that her cinemas remain a desired entertainment option, even amidst the growing competition coming from online movie distribution channels.

In Cheo’s 22 years with GV, she has seen the landscape of the cinema industry go through numerous ups and downs. Recruited as an accounting manager in 1996 to help with the company’s expansion, she soon had to face the 1997 Asian financial crisis, as well as issues of video piracy, which hit its peak during the late 1990s. Cinema box-office takings had dropped to an all-time low.

‘At one stage, it looked liked we were in a sunset industry. It didn’t help that the workload was overwhelming,’ she recalls. ‘I almost gave up during my first few months with the company.’

However, with a strong belief in the company’s potential, she stayed put, weathering storm after storm as GV steadily overcame challenges and expanded from four multiplexes in 1996 to 12 today.

Beyond economic challenges, GV also faces several obstacles that are unique to the industry. One of these is that of movie-ticket sales being limited by the number of seats available. ‘Unlike other retail businesses, where you can order more stock during peak seasons, we are physically limited by our seat inventory,’ Cheo explains. ‘So, if you compare this December’s results with last December’s, it’s not really possible to expect double-digit growth.’

Furthermore, regardless of how lengthy a movie is, consumers pay the same price. ‘So, if we have many movies that are longer than two hours, sales revenue would be affected because fewer sessions can be churned out in a day.’

To deal with this challenge, Cheo introduced the differential ticket-pricing model – a first in Singapore. ‘Since we were limited by the number of tickets we could sell during the peak periods, we decided to incentivise people to watch movies during the off-peak sessions by reducing ticket prices during these timings,’ she explains.

The other aspect challenging the cinema business is labour shortage. Cheo says that this affects overall cinema operations, as well as the ability to improve turnaround time to maximise the number of screenings during busy periods.

Acknowledging that this was a major problem that needed to be fixed, Cheo decided six years ago, when she was CFO, that the company needed to make a major investment in technology and automation to solve the labour crisis in a more permanent manner. ‘It was a difficult decision that we had to make, as we didn’t know whether the money we invested would be worth the payout,’ she says. ‘Fortunately, we’ve seen these initiatives pay off year after year, and we’ve seen growth in our earnings and market share.’

Today, GV leads the market with many innovations that are not only groundbreaking in Singapore but across the world. These include e-ticketing via QR codes on mobile phones, the use of auto gates, and digital box offices where patrons can use self-serve machines to purchase their tickets. ‘All of these innovations have not only helped us to cope with labour shortages but have also helped us to value add to our customers by saving them precious time which would have been otherwise spent in queues,’ Cheo says.

To celebrate GV’s 25th anniversary last year, Cheo and her team decided to pursue the Singapore Quality Class: a service excellence award under the SPRING Singapore Business Excellence initiative. ‘This not only marks an important milestone for the company but it serves as a testimonial to the hard work and dedication of our employees in building the company to a recognised level of excellence,’ Cheo says.

Staff development is also a key area, with 2016 designated GV’s ‘year of training’. ‘We want to develop our employees and give them opportunities to learn and shine in their chosen field,’ she says.

While Cheo’s job may sound like a dream, the journey that got her there is one that is characterised by dedication and hard work. Cheo reveals that in school, she found difficulty making sense of many of her subjects, and that she had to rely heavily on memorisation just to get by. It wasn’t until she had the chance to be exposed to accountancy subjects after secondary school that she realised that she had a natural inclination for the field.

As she entered the working world, Cheo took on a job as a junior accounting officer, while pursuing ACCA qualifications on the side. ‘It was hard having to juggle work with part-time studies, but I knew that in my chosen accountancy field, I would need formal qualifications to progress further,’ she says.

Eventually, she gained her ACCA Qualification and took on a job as an accountant in a local firm involved with the distribution of Piaggio scooters. Her experience here, setting up accounts for multiple retail outlets, would later prove invaluable. After three years, she saw a job advertisement for GV, which attracted her not only because of her fondness for the cinema but also because the company was a forerunner in introducing the multiplex concept to the cinema industry.

Having landed the job at GV, Cheo soon realised the uphill task facing her. There was a lack of proper accounting systems in place, so she promptly spent the next few months clearing backlogs, standardising procedures and creating a system that non-accounting users such as HR personnel and cinema shift managers could use.

After establishing and stabilising the backroom, Cheo was then able to refocus her attention in helping management to run the business more efficiently. Her eagerness to learn the ropes helped her to rise quickly to the position of financial controller in 1999 and CFO in 2010.

As CFO, Cheo worked closely with top management, exposing her to aspects of the business beyond finance and accounting. Hence, in 2013, when she was offered the position of CEO, it seemed like a natural progression and something that she had spent the last two decades preparing for.

Coming from a finance background, Cheo says that she has the advantage of numbers always being at the back of her mind. ‘This helps me to structure deals and make decisions that enhance business performance,’ she explains. ‘With knowledge of the numbers, I am more confident and better able to weigh business risks and benefits.’

Thankful for the role that ACCA has played in helping her to progress from an accountant to managing Singapore’s leading cinema chain, Cheo tries to give back by getting involved in events organised by the association, whenever possible. Most recently, she spoke at the 2017 ACCA Ethics Film Festival, as well as the 2018 ACCA Affiliates Dinner.

She also has some advice for aspiring accounting professionals hoping to emulate her success: ‘As the bean counter in the company, you have every opportunity to gain experience and value-add to the business. Try and focus on building up your business acumen and credibility, as these are two essential qualities you’ll need to run a successful business.’

In today’s job market, staying in one company for more than 20 years is increasingly rare. What keeps Cheo loyal to GV and what keeps her motivated to drive the company to even greater heights?

Cheo jokes that being in a company where its mission is to deliver fun is a huge pull-factor. On a more serious note, though, she says that having gone through ups and downs with the company, and seeing herself and others around her grow, has ingrained in her a strong sense of loyalty.

In addition, she says that despite having been with the same company for 22 years, she has never found the job boring. ‘Whether it’s being tasked to take on new undertakings that don’t fit in any of the existing departments, or gaining exposure through industry events overseas, I’ve been constantly challenged out of my comfort zone,’ Cheo says. ‘This has helped me to gain a better perspective of our industry and understanding of the business dynamics.’

For Cheo, taking on the CEO position – the first woman to do so – also required her to step out from behind the scenes and into the public light. She says that unlike previous CEOs, who possessed more charismatic leadership styles, she has had to work doubly hard on her public presentations. Even so, she says that she never questioned whether or not to take up the role, explaining: ‘I knew I was probably ready for a bigger role, having worked closely with prior CEOs to run the company for many years.’

Looking back, Cheo reflects on the many obstacles she’s overcome in a positive light. ‘I’m glad I went through everything that I did,’ she says. ‘I think all these experiences dealing with crises have made me more resilient and a better leader today.’

"At one stage, it looked liked we were in a sunset industry. It didn’t help that the workload was overwhelming"

Golden Village (GV) Multiplex was established to develop and operate modern, luxurious multiplex cinemas in Singapore. Today, it is the city-state’s leading cinema exhibitor with 12 multiplexes housing 100 screens. The prime mover in the introduction of the multiplex to Asia, GV’s first imprint in Singapore was made in 1992 with the successful opening of the Yishun 10 cinema complex. In October 2017 the company opened Singapore’s first laser projection multiplex at the Singpost Centre retail mall in Paya Lebar. The company also operates Golden Village Pictures, Singapore’s leading independent film distributor.

"Unlike other retail businesses, where you can order more stock during peak seasons, we are physically limited by our seat inventory"