Kieran Donnelly, the North’s comptroller and auditor general, mounts a fierce guard over the public finances – and without ever straying into party politics 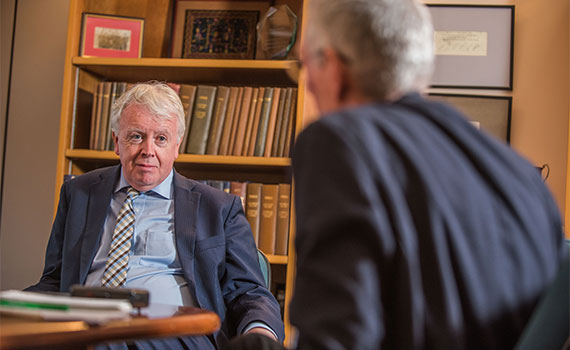 Kieran Donnelly became involved in public audit simply because a job in it ‘came up’. Perhaps to his surprise, he enjoyed the work so much that he made it his career. ‘It was exciting in the early days,’ he recalls. ‘I was fortunate to be involved in some value-for-money reports in my early career and I saw the value added from those, and that got me excited.’

Around that time, the mid-1980s, public sector auditing was becoming a lot more important. A scandal over the UK’s Crown Agents – which in the 1970s had placed colonial government funds in dubious investments – led both to a growing recognition of the need for professional accountants in the public sector and for the reform of the auditing of public bodies. In Britain, the National Audit Office was formed and in Northern Ireland the Exchequer and Audit Department became the Northern Ireland Audit Office (NIAO). Since 2009 Donnelly has headed the NIAO as comptroller and auditor general.

The NIAO has an annual budget of around £8m and 115 staff, more than 70 of whom are qualified accountants. The comptroller and auditor general authorises the issue of money from central government funds to Northern Ireland government departments, and handles the financial and value-for-money auditing of central government bodies, including health and social care trusts, and the auditing of district councils. Donnelly is supported by a senior management team of a chief operating officer and five directors.

‘My purview covers both financial audit and value for money, and I enjoy all of it,’ explains Donnelly. ‘If there are no issues I am quite hands-off, but if there are serious issues I am pretty hands-on. For example, when I qualified my audit report on the Department for the Economy accounts in relation to RHI [Renewable Heat Incentive], I was hands-on in terms of how we reported it and the key points we wanted to bring out. If there are serious issues, I have to call it as it is. I will not shy away from making the strong points that need to be made.’

Politically contentious issues can be challenging for public sector auditors, who have to draw honest conclusions while avoiding saying things that could be regarded as politically partisan. ‘The one restriction on my work is that I am precluded from questioning the merits of policy objectives,’ Donnelly explains. ‘It is important that we do our value-for-money reports in the real world, so we can’t suggest solutions that are not politically feasible. We have a close relationship with the Assembly’s Public Accounts Committee, so we don’t operate in a bubble but in a political context.

‘There is, of course, a longstanding convention that the committee does not break down on party political lines. My own office stays completely clear, completely neutral, of party political ideology. But if a policy is not working, we would certainly draw public attention to implementation problems; that might lead to a policy review. If there is a lack of clarity around policy objectives, it is perfectly within my remit to ask questions. Or if there is a policy constructed on a flimsy evidence base, that is perfectly within my purview.’

The current absence of a functioning Northern Ireland Executive is an impediment to the efficient management of public finances, particularly the health service, which is in serious need of reform. ‘We did a report in 2016 on health service reforms,’ Donnelly points out. ‘I think there is a consensus that we need a radical transformation across the system. Without a Northern Ireland Executive there is obviously a loss of momentum. That, in any event, is a long-term challenge, and it will take a number of years to really transform health into the service that we are all seeking.’

Despite Stormont’s suspension, the NIAO continues to audit departmental accounts and produce value-for-money reports, but there are concerns that these will have less bite than if the Assembly was still functioning. ‘The Assembly and, in particular, the Public Accounts Committee, has been excellent in giving my reports traction,’ Donnelly says. ‘I was around under direct rule, when reports went onto the shelf and were not always successfully rolled out with recommendations implemented. That situation significantly improved under devolution.’

The North’s public sector also needs continued political momentum to pursue other reforms that assist public bodies to work in a joined-up way. ‘This was starkly illustrated in a report last year by the Organisation for Economic Co-operation and Development,’ Donnelly explains. ‘The civil service is now starting to break down departmental silos. That is hugely important, particularly in dealing with deep-seated social issues that straddle the functions of government. For example, our recent report on homelessness was about much more than bricks and mortar; it was about how government is working in a unified way to deal with the needs of vulnerable people in our society.

‘Another issue is skills and capability. We see so often the public sector getting its eye wiped by quite savvy private sector operators, particularly when we are dealing with complex constructs, as we were with PPP [public private partnerships]. Either the public sector skills up to deal with those complexities, or else we deal with the private sector in simpler ways. If you are going to construct complicated delivery mechanisms, you need to back that up with a very sophisticated skills base.’

The good news is that the professionalisation of public sector accountancy is improving the quality of reporting. ‘Technically, public sector accounts are of much better quality now than in the past,’ Donnelly says. ‘Where there are problems, they tend not to be on the accounts, but on issues such as governance. Sometimes if the reader goes through the governance statement it is more telling than the core accounts – issues such as handling conflicts of interest and compliance with procurement rules often feature. There will always be problems, but I think what is important is that where there are problems, the system learns from them and the learning is shared across the public sector.’

One of the NIAO’s recent reports was a good practice guide on bribery and corruption. ‘The main driver was to send a message that there is a danger of complacency and a need to counter the perception in some public sector circles that we are all clean and don’t have any fraud – as then a problem comes to bite,’ he explains. ‘It can get into the system without anyone noticing. Once it is in, it is very difficult to eradicate. By international standards, we are pretty corrupt-free, but almost every year I will come across a serious example of unethical behaviour somewhere in the public sector. There are common themes: basic controls not being followed, an inappropriate tone from the top, the culture of organisations, conflicts of interest not being acknowledged or managed.

‘A background factor [in producing the guide] was the transfer of planning responsibilities from central to local government. We want to make sure that planning controls are in tip-top condition. There is always a particular vulnerability to bribery and corruption in planning, hence the need for controls to be particularly watertight.’

And the role of public sector auditors is not just to respond to problems, but also to anticipate and prevent them. It is a role that Donnelly clearly enjoys.

"If there are serious issues, I have to call it as it is. I will not shy away from making the strong points that need to be made"

The renewable heat incentive (RHI) has been one of Northern Ireland’s most expensive public sector mistakes of recent years, leading to potentially hundreds of millions of pounds in liabilities through promised inducements for owners of commercial properties to switch to wood-burning stoves in place of heating systems that emit more carbon dioxide. The lack of controls produced the ‘cash for ash’ scandal, led to high costs and contributed to the collapse of the Northern Ireland Executive. The affair was – and still is, with a public inquiry ongoing – politically explosive.